Step into the main dining room of Humphreys Restaurant and understand how opulence is mastered. The large multileveled room is bathed in soft light and flowing panels of pale gray and ice blue upholstery. Juxtaposed against the whimsical softness of the colors are massive exposed beams that lend an anchor to a bay-side view that threatens to draw you in completely. The menu is thoughtful and inventive in the way it continues this balance between the ethereal and masculine – the Mirin Sesame Shrimp appetizer positions two large shrimp atop a bed of mango-mint relish that is refreshingly cool against a wasabi dressing. The menu and decor offer a cohesive gesture of sophistication that may just leave you swooning.

Humphrey's: An Island of Temptations

Humphrey’s by the Bay is a veritable San Diego landmark.  Both a popular concert venue and a highly-esteemed restaurant, local audiophiles and foodies alike flock to Humphrey’s for multi-sensory satisfaction.  Removed from the urban sprawl and congestion of “mainland” San Diego, the restaurant’s Shelter Island location offers the tranquility of a desert isle within close proximity to the conveniences of a bustling metropolis. Chef Paul Murphy’s globally-inspired menu adds to the exotic travel fantasy, with its bold, revitalizing flavors that, in true island style, tend to accentuate the bounties of the sea.  With breath-taking tableside views of the city, punctuated by the lazy bobbing of sailboats docked along the shore, Humphrey’s is a delicious respite.

Although Shelter Island is already cloaked in darkness on this late autumn evening, we are drawn by the soft glow emanating from the restaurant like moths to a flame.  We follow the meandering road and faint illumination to Humphrey’s by the Bay. Turning into the parking lot, the restaurant emerges from an outcrop of palm trees like a lavish Swiss Family Robinson-inspired island retreat.  The large, glass-fronted entrance greets us, giving us intriguing glimpses of the lush dining room that lies beyond its doors.  We are led on a winding path past the curtained private room into the main dining area, an open space in cool neutral tones.  The focal point of the 168-capacity space is the large wall of windows at the far end: although hidden under the black of night, subtle glimmers of light and slight shadows from buoyed boats hint at a stunning view.  An iron sculpture suspended from the ceiling, suggestive of Brancusi’s futurist birds and Calder’s abstract mobiles, offsets the dark wooden beams and adds an erudite sophistication to the minimalist space.  We settle into the expansive heather grey armchairs by the window, immediately comfortable in this approachably elegant dining environment.

We are immediately greeted by our server, Tim, who presents the menu and wine list with a flourish and offers helpful and knowledgeable guidance.  The wine list is an extensive multi-page assortment of predominantly California wines, with a smattering of Australian and European vineyards to round out the collection.  The menu is more pared down, offering a careful selection of dishes with varied and exotic influences: the ingredients and culinary styles of Asia, the Mediterranean, and Middle East are all fair game in Executive Chef Paul Murphy’s deft hands.  While the dishes favor seafood, more red-blooded options are also offered for meat lovers.  Overwhelmed by the diversity of the menu, and its intriguing flavor combinations, we willingly submit to Tim’s suggestions for our appetizers.  With drinks and appetizers ordered, we sit back and relax into Humphrey’s soothing candlelit calm.

Our appetizers arrive all at once, an artful collection of culinary presentation.  The soft pink of shrimp attracts us to the Mirin Sesame Shrimp.  The large, meaty crustaceans curl sensuously around each other, accented by a garnish of mandolined cucumber slices and a pool of the sweet, pink-hued rice wine for which the dish is named.  As we each spear a shrimp, we expose a hidden component to the dish: a relish punctuated by chunks of vibrant yellow mango and sweet red bell pepper.  The dish plays with the subtle nuances between different forms of sweetness: the salty sweetness of the shrimp is juxtaposed against the more tangy sugar of the mango and the mirin’s stronger fermented flavor.  Accents of mint refresh the taste buds and complement the coolness of the dish.

The Stuffed Figs are presented like an abstract work of art.  A long, thin dish is dotted by deep purple halved figs, their open faces glistening like wet paint blots on an artist’s palette.  The dish is garnished by balsamic vinegar and a scattering of slivered almonds, adding notes of chaos to the precision of the composition.  The taste confounds my preconceptions: rather than being sweet and fruity, each morsel is dominated by a savory earthiness, accented by the pungent, warm blue cheese.  It introduces a seasonal component to our feasting and a welcome warmth on this chill autumn evening.
The Seared Blue Crab Cake, an astounding, near dinner plate-sized golden mound, dwarfs the other appetizers.  Substantial enough to be a main course, it is drizzled with a zigzag of cilantro sauce, a vibrant green reflected in the verdant tangle of escarole and mixed greens that accompanies the dish.  Pungent shallots and citrus are dominant flavors, adding potency to the mild crab meat.  Hints of Asian culinary influence intrigue the tongue, the nutty flavor of sesame perhaps, or miso’s sweet acidity used so sparingly they are ethereal and elusive.  Dipping a hearty chunk of crab cake into the cool garlicky aioli adds new layers of complexity to the dish, making for a light but nuanced dish.  Although trying to save room for the feast to follow, my dining companion and I have a difficult time resisting this tasty creation.

The Maple Glazed King Salmon on a Plank is an unadorned ode to the splendor of this oceanic “king.”  The fish is served atop the very plank it is cooked on, presenting a startlingly rustic juxtaposition to the refined quality and skilled preparation of the dish.  The pink flesh of the fish peeks seductively from beneath its deep, smoky maple sauce, tantalizing us with the promise of boldly satisfying flavors.  Reminiscent of “salmon candy” from the Pacific Northwest, the sweetness and inherent richness of the buttery salmon is intensified by the roasted, sticky sugariness of the spicy maple glaze coating it.  Creamy, white mashed potatoes and bright orange carrot spears, radiating from the salmon steak toward the edge of the plate, act together as a simple platform for the salmon’s dynamic flavors, focusing the palate on the dish’s main attraction.  It is a dish that reveals the unexpected complexities and sense of culinary opulence conveyed by high quality ingredients.

Confounding my expectations, I am surprised when the Gorgonzola Walnut Raviolis are delivered to our table.  Instead of the modest pile of pasta I anticipated, I am greeted instead by a brick of tender shortrib, filling the air with the gamey aroma of braised meat.  Two tree-sized broccoli florets add a contrasting note of color to the dish.  It is only after deconstructing the shortrib that the raviolis are revealed: large, fluffy pasta rounds that form a soft cushion for the meat and soak up all of its flavorful jus.  The butternut squash filling, accented by cinnamon and nutmeg, acts as a counterpoint to the shortrib’s heartiness and imparts a sweetness that balances this earthy, savory dish.  Like the Stuffed Figs, this dish captures the comforting flavors of autumn, with the spicy sweetness and nourishing heat of a winter stew.

Despite the growing mountain of takeout containers we are accumulating, we can’t resist sampling Humphrey’s sweet confections.  In the spirit of overindulgence that has characterized the rest of our meal, three desserts arrive to the table, each tempting us with their virtues, and sinful attractions.  Each are manifestations of the diverse possibilities of sweet tooth satisfaction.  The White Chocolate Cheesecake is an elegant cylinder of creamy white with a dark chocolate crumble crust encircled by a vivid red berry coulis.  The white chocolate adds a buttery taste to the velvety cheesecake, with the flavors being brightened by the tangy sauce.  The Chocolate Lava Cake is a study in texture and darkly sweet decadence.  True to its name, a miniature volcano of fluffy cake rises from the plate alongside a tiny ramekin of vanilla bean ice cream.  A long thin chocolate cigar rests on top of the cake, another eloquent use of chocolate as a culinary medium.  Upon sinking my fork into the cake it “erupts,” flooding the plate with warm chocolate sauce.  As the palate nears chocolate saturation, a taste of cool ice cream refreshes the taste buds and prepares the mouth for more indulgence.  Unlike the weighty decadence of the White Chocolate Cheesecake and the Chocolate Lava Cake, the Pear Bread Pudding is a surprisingly light refreshment.  Basking in its warm, bruléed sugar aromas, it is an immediate enticement.  A little scoop of caramel-colored dulce de leche ice cream crowns the crisp, golden confection, melting slowly under its radiant heat.  The first bite is a surprise: the bread pudding has the airy flakiness of a baklava, without its greasy heaviness.  It crackles in the mouth, dissolving into pure caramelized sweetness.  Chunks of pear add a slight crunch and fruitiness to the dessert, grounding its flaky etherealness with the nostalgic, countrified flavors of a warm pie.  While each dessert is an expression of pastry mastery, the Pear Bread Pudding is a clear favorite.

We stagger toward the door under the weight of our leftovers and full stomachs, giddy from the serotonin rush of our bacchanal extravagance.   Driving down the winding road leading back to civilization, we reluctantly leave behind Humphrey’s island of temptations, cheered only by the knowledge that this gluttonous getaway is not too far out of reach. 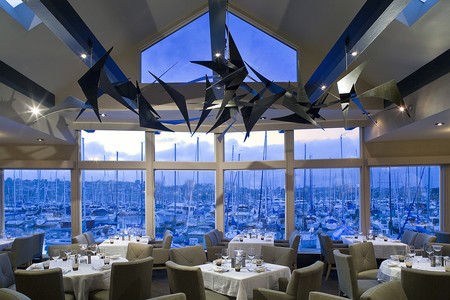 What is the price of the Sunday brunch buffet?
The brunch is $39.95/adult and $16/children ages 4-11yrs old.
Do you have an ocean view?
Humphreys does not have an ocean view, but does have a beautiful view of the San Diego Bay.

For a Very Special Breakfast

Monday-Saturday: 11:30am-2:00pm. This is a sample menu only. Prices and availability may be subject to change.

Sunday: 10:00am-2:00pm. This is a sample menu only. Price and availability may be subject to change.

Monday-Sunday: 5:30pm-9:00pm. This is a sample menu only. Prices and availability may be subject to change.