Located on the edge of Harbor Island, just out of earshot of the airport, Island Prime’s stilt-supported structure extends out over the bay, giving diners the sense that they are floating along on a dinner cruise. Chef Deborah Scott's retro, yet sophisticated menu features metro steaks, seafood, and other diversely decadent dishes that will make your jaw drop. Between the nostalgic cuisine and the breath-taking view, Island Prime will keep you coming back for more.

Enter Island Prime's giant wood-framed glass door into an oasis of rustic textures with exotic touches and prepare your senses for an unforgettable dining experience.  While waiting for our table, we took a moment to look around us and appreciate the natural aesthetic conveyed by the restaurant's large wooden beams and the stone wall that lined the stairs down into the dining room.  The warm lighting served to accentuate its earth tones.  Large, fresh flower arrangements filled with lilies and other exotic flora softened the rustic décor and upheld the restaurant's tropical name.

To the left, in a section of its own, Island Prime's more casual counterpart, C-Level Lounge was preparing for a busy evening.  This restaurant has its own kitchen, its own menu, and even its own staff.  In fact, the only thing the two restaurants share is the bar, which offers a fun selection of cocktails such as the Ricky Ricardo mojito and the Skyline Martini.  Chef Deborah Scott later explained that her concept for C-Level was influenced by her Chesapeake Bay upbringing, and that with both restaurants she was trying to create a feeling of nostalgia, a concept that would later ring true for us.

Our hostess escorted us through the restaurant to our corner table overlooking a phenomenal view of the San Diego skyline and the Coronado Bridge.  Located on the edge of Harbor Island, just out of earshot of the airport, Island Prime's stilt-supported structure extends out over the bay, giving diners the sense that they are floating along on a dinner cruise.  The restaurant's ambiance, in conjunction with the water, is reminiscent of Monterey Bay.  When we first sat down at sunset, the hustle and bustle of the city contrasted with the calm of the just-opened restaurant; soon, the activity of the city began to calm down and the vibe of the restaurant began to pick up.  We were surrounded by excited diners and waiters who were eager to help with menu selections and wine pairings.

When creating Island Prime in 2005, the venerable Chef Deborah Scott envisioned a retro, nostalgic feel which she realized through specific details such as the orange accents on wooden beams, or in the presentation of steaks on cast iron skillets.    Chef Scott visited our table and expressed her excitement in presenting us some of her own favorite dishes.  She tantalized us with the prospect of the wonders to come: a cheese plate, a beet salad, ahi tuna, and their bone-in rib eye.

First, our waiter brought us a special amuse bouche from the kitchen: a beautiful champagne-poached oyster lovingly topped with caviar lying upon a bed of what we could only assume to be sea salt, peppercorns, and cumin.  The soft, tender oyster and caviar practically melted in our mouths, and were enhanced by the light alfredo-like sauce in which they were swimming.  Popovers fresh from the oven arrived with our oysters; it has been a long time since I've been this excited about bread. The flavors reminded both my dining companion and me of past comforts, while the refreshing jalapeño jelly butter added a hint of the exotic.

The presentation of the Point Reyes Blue Cheese Tart was superb with varying shapes, colors, and placement of the different ingredients.  On the right side of the plate, the round of Point Reyes blue cheese was veiled by a fig reduction that had a long train of sherried figs cascading down the middle of the plate with two triangles of a grainy cracker stacked geometrically in between.  To the left, my eyes were drawn to the bright green of an arugula salad topped with julienned green apples.  Once I allowed my desire for the dish overpower my wish to preserve its beauty, I started with the cheese and figs: the pungent, California-local blue cheese tasted almost sinful, and the figs added the perfect amount of sweetness to its saltiness.  Still, the most brilliant part of the plate was the addition of the mild arugula salad, offering such a cleansing of the palate that the cheese and figs could be experienced like anew every time.  We enjoyed a glass of Dr. Hyden twenty-year Riesling with the plate, its sweet, smooth taste helping to further balance the course.

When the Baby Beet Salad arrived, it became clear that Chef Deborah Scott loves plating in threes.  . On the right sat a round of warm goat cheese, next to which lay three layered beets: one red, one pink, and one golden. To the left, the plate was completed with baby greens and candied walnuts.  The crisp beets' fresh taste lived up to their colorful presentation, and the warm, crusted goat cheese added a strong contrast to its creamy and rich flavor.  The subtle sweetness of the locally grown baby greens again offered a welcomed respite from the other delicacies, and the crunch of the candied walnuts added yet another enjoyable texture to the already bountiful collection on the plate.  Our beet salad was suitably accompanied by a Grenache blend from the Chateau d'Esclans in France that provided a wonderfully subtle flavor that allowed the flavors of the plate to prevail.

While eagerly anticipating our entrees, we took another moment to enjoy the sparkling view out the window, which had taken a backseat to the equally stunning views of our plates.  Our three medallions of Everything Crusted Ahi Tuna were charmingly presented alongside spoon leaf spinach, oyster mushrooms, and forbidden rice in diagonal layers with swirls of brown butter citrus vinaigrette filling in the blanks on the plate.  The range of smells from oceanic to earthy suggested great treats to come.  Starting with the ahi, we were awed by the silky texture of the tuna, accented by the peppery, crunchy crust.  The forbidden rice grounded the dish with its deep, purple color and its grainy texture and flavor, reminiscent of a larger-grained risotto.  Our waiter shared a little secret with us, explaining that this Chinese rice's tastiness is thanks to the mire-poix mixed in, yet camouflaged by the rich color of the rice.  A surprising favorite of the evening came in the form of the spinach, proved incomparable to any spinach we had ever experienced.  This wonder was expertly sautéed with garlic and oyster mushrooms just to the point of warmth while still retaining its crispy freshness and earthy taste.  The Erath Pinot Noir proved to be an excellent pairing: lighter than a more traditional pinot, it accentuated the tuna's meatiness without overpowering it.

To continue our indulgence, the Prime Bone-In Rib Eye arrived with a side of Truffled-Cream Corn, accompanied by a Meritas from the Hedges Family Estate Red Mountain.  The rib eye was presented already sliced on a cast-iron skillet, reminding us of Chef Scott's retro concept for the restaurant.    The crisp, flaky outer edges of the steak enhanced its texture.  It was simply done yet cooked exquisitely to medium doneness, exemplifying Chef Scott's idea that, it's best to let the steak itself do the majority of the work and accentuate its greatness.  The truffled cream corn, masquerading as something your grandmother used to make, was really so much more.   Upon our first taste, our original response was that the creamed corn was velvety while maintaining the crispiness of the fresh corn.  Then, all of a sudden, the rich taste of truffle arrived, albeit fashionably late.  It was a welcomed treat that added a new dimension of opulence to this very traditional dish.

Dessert snuck up on us: we were presented with a Crème Brûlée trio on a square plate with four divots, one each for the three ceramic dishes, and one for a lovely orange and raspberry garnish.  The first dish housed a blueberry crème brûlée with a soft chocolate cookie on top; the second, a cherry crème with a crumbly almond cookie; and the third was a classic vanilla.  All were sprinkled with a snow of powdered sugar.  The blueberry and cherry custards both had fresh fruits mixed in, and all had the smooth texture and rich flavor one would expect to tap into in a crème brûlée.  We enjoyed a Muscat de Rivesaltes from the Chateau de Jan in France with our dessert trio, which was chilled and not overly sweet.  This course was a delightful conclusion to an incomparable meal at one of the Cohn Restaurant Group's most esteemed restaurants.

Whether it is in the contrast of the retro, woodsy décor of the interior with the vibrant and modern city view, or the various dishes' combinations of textures, shapes, and flavors, Island Prime, much like its Point Reyes Blue Cheese Plate, is truly a study in balance.  Chef Scott provides customers with the opportunity to enjoy a chic city view while enjoying more natural, rustic cuisine; she prepares often three-fold dishes that excite all the senses in their complimentary tastes and engaging presentation; she presents customers with a feeling of nostalgia while adding in a touch of the exotic—all culminating to make Island Prime a scintillating culinary getaway.

Get two $50 gift cards ($100 total) for only $79.99. This exclusive offer is only available online through our website while the supply lasts. Only a limited number of gift cards are available at this discounted price. No rain-checks.
Price: $ 79.99
Adding to cart ... 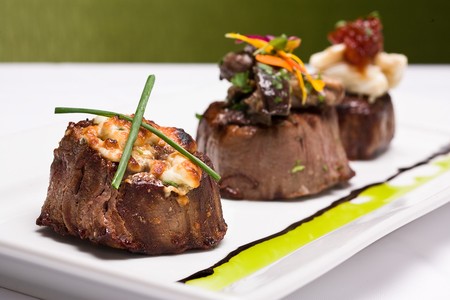 Can I make a reservation for the outdoor patio?
The outdoor patio is the C Level Lounge, a more casual side of the restaurant. Unfortunately, the C Level Lounge accepts walk-ins only.
Who’s the chef?
Deborah Scott is not only the masterful Executive Chef of Island Prime, but also of Kemo Sabe and Indigo Grill.
What can I do to guarantee that I get a window table?
Unfortunately, specific seating, such as a window table, are first come, first served and cannot be guaranteed.
What time does the C Level Lounge open?
The C Level Lounge opens daily at 11:30am.
I read someone took a water taxi from Hyatt to Island Prime, can u tell me which Hyatt has the water
Yes, there is a water taxi service offered through San Diego Harbor Excursions. The cost is $7.00 per person each way and can pick you up at dock A located behind the Manchester Grand Hyatt. Advance reservations are required. Phone: (619) 235-8294. Website: http://www.sdhe.com/san-diego-water-taxi.html

Appetizers From The Sea

Appetizers Of The Land

Any Turf Can Surf

Only offered at C-Level.

For A Healthier Lifestyle

The view is nice, but the service is slow.