Memorable Luxury with a Modern Twist

The coastal village of Del Mar is nothing short of spectacular. The main road, Camino del Mar, running through this quaint beach town is lined with various restaurants and boutiques and is just a stone’s throw away from the historic Del Mar Racetrack. Sitting in the heart of this picturesque village is the equally historic L’Auberge Hotel. Overlooking the crystal blue ocean, the L’Auberge Hotel is an elegant coastal hideaway, and tucked comfortably off of its lobby is KITCHEN 1540, L’Auberge’s signature restaurant. KITCHEN 1540 is known for modern American cuisine with a farm-to-table concept and playful, innovative techniques headed up by Executive Chef Paul McCabe. Since opening in November of 2008, KITCHEN 1540 and Chef McCabe have gained many accolades including “Best Hotel Fine Dining” from the California Restaurant Association, and the “Wine Spectator Award of Excellence” for a wine list that boasts more than 250 wines from around the world.

I was looking forward to my experience here at KITCHEN 1540, and the moment I entered the hotel I instantly started to see why. As my companion and I first walked through the doors of the lobby, I was instantly overcome with a tranquil and serene feeling. As I looked around, the first thing that I noticed was the panoramic view of the Pacific Ocean ahead of me; the colors of the lobby complemented the sea with soft beiges and whites, with accents of sea foam greens and blue hues in the contemporary coastal décor. This tranquility carried beyond the lobby and through the doors of KITCHEN 1540 with the same soft beige tones, contemporary décor, and white vaulted ceilings. The wine bar to the right of the entrance was adorned with blown glass plates and modern light fixtures.

We were greeted by the hostess, and as she guided us to our table I noticed that the back of the restaurant provided a private dining room inside of their large wine vault. To the right of the restaurant dining room was the open presentation kitchen in which Chef McCabe and his team were skillfully at work. I noticed that out of the windows to my left were a line of cabanas available for private dining on the outside patio. We were sat at a table next to a long fireplace built into the wall that added to the restaurant’s already warm, comforting feel. Just then Chef McCabe graciously came to greet us, and my dining partners and I unanimously decided to put our menu selections in the Chef’s hands.

Just as our delightful server, Anya, gave us our cold bottle of still water, our first course had already made it to the table. It was an arranged plate of house-cured procuitto and salami, and an aged Gouda and Goat cheese. This assortment of meats and cheeses, intended to be a shared plate, is something that KITCHEN 1540 is known for. The platter was also adorned with accompaniments of quince marmalade, house-made pickles, pickled vegetables, honeycomb, apples, crackers, and a blackberry mustard sauce. The endless combinations of the salty meats and cheeses, and the sweetness of the honey, fruit, and sauces complemented each other and was the ideal starter to awaken my taste buds.

Next we were served two salads from the menu: the first being the Organic Beet Salad with Valdeon blue cheese, pistachio brittle, and caramelized yogurt. The small and tender beets paired well with the creamy blue cheese; the sweet and salty pistachio brittle added just enough crunch and texture to the salad. A spread of the caramelized yogurt was presented on the side of the salad and added a nutty yet tart flavor that rounded out the dish.

The second salad was the Farmhouse Salad, which included shaved asparagus and green snap peas lying on a blanket of tomato pistou gelee, a small mound of pumpernickel powder, and an orange blossom vinaigrette. The shaved summer vegetables were crunchy and fresh, and the sweet acidity of the tomato gelee paired well with the earthy spice of the pumpernickel. Overall, both of the salads were refreshing and showed a playful use of simple seasonal vegetables.

Two more cold dishes were presented to us -- the Hiramasa Crudo and the Bison Tartare. The Hiramasa Crudo (yellowtail amberjack) was presented on a long, frosted plate, thinly sliced and topped with an artful presentation of compressed fennel slices, duck cracklings, and steelhead roe. The fish was tender and melted in my mouth at the same time that I got the sweet crunch of the fennel. The salty bits of the duck cracklings came through and the delicate bursts of the steelhead roe made this sophisticated dish a pleasure to eat.

I then moved on to the Bison Tartare. This was also served on a frosted plate displaying a perfectly oval shaped mound of tartar garnished with sprigs of chive. Served to the side of the tartare was a small pool of smoked bacon sabayon. I picked up a slice of toasted brioche that accompanied the dish and topped it with some tartare, and then swept it through the sauce. The deep bacon flavor and smokiness of the sabayon added to the richness of the Bison meat. There was also a subtle crunch and mild spiciness of the chives that rounded out the tartare nicely.

With the next course, Chef McCabe sent out a Diver Scallop served on a popcorn puree, with candied almonds and a salted caramel drizzled around the plate. This was also garnished with carefully placed pieces of light and airy popcorn. The scallop was expertly seared and had a salty crust that went well with the caramel and sweet popcorn puree. As I dipped each bite of scallop into the sauces it tasted reminiscent of a Cracker Jack -- later Chef McCabe confirmed that this was his inspiration. This dish was creative and inspiring, and would prove to be my favorite by the end of the night.

Next was the White Corn Agnolotti, a shallow bowl filled with a small portion of al dente pasta tossed with tender pieces of Maine lobster, chanterelle mushrooms, sweet white corn, and truffle brown butter. This was a rich and decadent dish, blending the sweet crunch of the corn, the lobster, and the salty, buttery mushrooms with the earthy brown butter lovingly coating the pasta. Every savory bite kept me wanting more, and before I knew it the plate was clean. Unsure if we had enough room for any more food, we watched the next course approach the table.

As Anya placed the sizzling plate in front of me, she lit up with excitement as she told me that Chef McCabe had a special signature dish that was not on the menu, but that he wanted us to try. The dish was a Foie Gras medallion served sizzling and cooking on a hot rock surrounded by thyme sprigs, topped with blood orange pop rocks (Chef McCabe’s own creation). It was paired with a black pepper financier and an orange citrus reduction. This dish stimulated my senses as I heard the ongoing sizzle of foie gras on the hot rock and caught the fragrant aroma of the thyme. I released some of the foie gras from the rock and topped my sweet and peppery financier with the delicate morsel. After adding a drizzle of the citrus sauce, I took a bite. The moist and sweet financier held up to the buttery foie gras as it gently dissolved in my mouth. I then got the gentle pop of the pop rocks adding an interesting texture and delightful surprise to the entire dish; another fine representation of Chef McCabe’s sense of fun sophistication in his cuisine.

Just as soon as I thought this exciting adventure through the culinary mind of Chef McCabe was coming to an end, we saw two more dishes being placed in front of us. They were the Alaskan Halibut with black mussels, artichokes, and fava beans in a preserved lemon-mussel broth; and the Wagyu Tri Tip with crispy potato, organic asparagus, foie gras, and chipotle hollandaise. Almost overwhelmed with the amount of food generously given to us, I accepted my fate and dug into the dishes. The filet of Halibut was happily nestled in the savory mussel broth. The large fava beans were a fresh addition to the dish and cut through the saltiness of the broth. The tender mussels also gave the dish a certain playfulness and depth of flavor.

I moved on to tasting the Wagyu Tri Tip and slowly cut through one of the two tender medallions of beef. I dipped the bite into the rich chipotle hollandaise and savored the subtle spice as the meat dissolved in my mouth. The small rounds of potato were fork-tender and soaked up the natural jus from the beef, while the crunchy asparagus were cut into small bite-size pieces. The vegetables and the small pieces of delicate foie gras were placed strategically on the plate, giving the overall dish a new and artful twist to an otherwise classic pairing of ingredients.

Last but not least, Chef McCabe sent out a sampling of desserts from the dessert menu, offering a small taste of each for us to try. The Red Velvet Cake, made with beet juice, was moist and lightly sweetened. The cake was topped with candied beets, which added another dimension to this classic dessert. The next treat I chose to try was the Frozen Key Lime Pie. Chef McCabe accompanied this slice of frozen pie with a small mountain of lime sugar and dehydrated meringue. There was a striking balance between the tart lime flavor and the sweetness of the sugar. The frozen element of the pie added a cold and refreshing feeling after my meal and was a decadent and satisfying finale to the night’s feast.

After thanking Chef McCabe for the incredible meal, and upon showing our gratitude to the friendly and knowledgeable wait staff, we gradually made our way out of the restaurant. It was a meal never to be forgotten and I am looking forward to my eminent return for more of the truly creative, inspiring, and exciting dishes of Chef Paul McCabe.

Buy restaurant gift certificates online & save up to 20%

The perfect gift for any occasion. It's Quick & Easy! 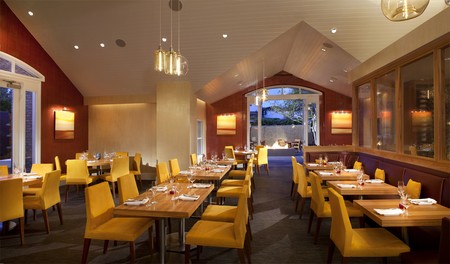 What is the dress code?

The dress code is business casual to casual elegant. A description can be found on this link: http://www.sandiegorestaurants.com/article.cfm/article/15/Dressing-to-Dine--Dress-codes-defined

It was a bright, beautiful and open restaurant with a great ambiance, excellent service, and outstanding food. It helped create a wonderful Father's Day experience.

The food was really good, but the service was lacking.