Monsoon, an Indian cuisine focused restaurant in the heart of the Gaslamp District, is part of the Monsoon Group’s four main establishments that serves San Diegians a taste of the country, not just curry. The brother and sister tandem of Chefs Rakesh and Ashley Popat have a wide assortment of appetizers, entrees, Indian breads, curries, tandooris and vegetarian dishes on the menu to satisfy even the most critical Mumbai and Calcuttan food connoisseurs. The Lentis n’ Lamb and the Bangalore Masala bolster this bevy of long-time family recipes and round out this epicurean experience. Monsoon has an all-you-can eat daily lunch buffet for just under $14 from 11 a.m. to 2:30 p.m. and on Monday nights ($20) from 5 p.m. to 9 p.m. so patrons can get their fill of flavorful fare. Its outdoor seating provides guests the chance to enjoy the warm weather and hustle and bustle of Downtown. Inside Monsoon the floor-to-ceiling waterfalls, the warm wood, and exposed stone provide diners with an elegant eating environment. If you want exotic and authentic Indian food, Monsoon is a must.

We arrive at Monsoon on a fittingly rainy evening, as suggestive of the restaurant’s namesake as San Diego can muster.  Escaping the inclement weather we are immediately immersed in a warmly exotic refuge.  Seated side-by-side at one of the restaurant’s lush, saffron-colored banquettes, we gaze out at an architectural visual feast.  The restaurant is a skillful blend of decorative influences, marrying East with West, the natural with highly contemporary constructions.  Antique, Louis XVI-style chandeliers illuminate hand painted beams, and the bulbous bodies of sitars and tablas that decorate the walls.  Hindu stone sculptures punctuate large murals depicting colorful scenes of India, juxtaposed against the sleek modernity of the bar and buffet area to the right.  The tranquil sound of the trickling waterfall room divider echoes off rock pillars, mimicking the soft rain outside and transforming the space into an intimate dining oasis.  Pulsing, global-inspired trip hop tunes mingle with this naturalistic soundtrack to create a lively, yet unobtrusive musical setting, building anticipation for our culinary journey.  It is an environment that, like the menu, subtly blends diverse cultural influences, merging authenticity with experimentation, to create a unique global harmony.

While the menu at first glance reflects India’s distinctive culinary traditions, certain flavorful anomalies catch the eye: a starter of Masala Hummus, a Tandoori Chicken Caesar salad, and a Sundried Tomato and Basil Naan promise an epicurean adventure into uncharted flavor terrains.  Not only does Monsoon transgress global culinary borders, it also introduces diners to the gastronomic diversity within India.  Although predominantly North Indian in influence, Monsoon’s menu also features various regional dishes like Goa Fish from the Portuguese-influenced West, and Dizzy Nu Shak, a South Indian banana curry with certain East African influences.  The beverage list is similarly diverse: a respectable, California dominant wine selection is offered alongside a tantalizing mix of themed martinis and cocktails that utilize traditional Indian flavors like chai tea and tropical fruits.  Overwhelmed by the dizzyingly enticing menu options, my dining companion and I put our trust in the capable guidance of the Popat siblings, with mouths watering and expectations high from the spicy aromas perfuming the air.

We begin with brimming, stainless steel bowls of Malagatwany Soup.  The scents of coriander and garam masala waft up from the bowl while black gram dal and chunks of chicken peek out teasingly from the thick, rich liquid and hint at hidden depths.  It proves to blend the flavor memories of comfort embodied by homemade chicken soup with the rich spice mysteries of its culinary culture of origin.  The lentils and yogurt blend together to make a creamy, hearty broth, punctuated by the meaty chicken pieces, and infused with the complexities of its enigmatic seasonings, all of which is amplified when soaked up by the naan’s “blank canvas” accompaniment.  The soup manages to make the foreign familiar, while still maintaining a welcome exoticism.  It is a memorable start to the evening that portends to redefine my notions of winter comfort food.

A trio of appetizers is brought to the table in a riot of colors.  The vibrant red Chilli Chicken, accented by luscious strips of red bell pepper, contrasts beautifully with the green fan of lettuce leaves and sunny yellow lemon slices that garnish the dish.  Again, the air is filled with tantalizing scents, dominated by the tickling heat of chilies and a pleasing citrus acidity.  Tasting the dish reveals surprises obscured from olfactory detection.  The dish combines the smoky, spiced flavors of traditional Indian tandoori with a sweet and sour more characteristic of Cantonese cuisine.  The two disparate cultural cuisines are blended masterfully together by Chef Popat, creating a bold and unique dish that manages still to maintain the distinctive culinary traditions of each culture.

The Desi Chatt elevates classic Indian street food to the refinements of haute cuisine.  Two large samosa triangles entice us with their golden, flaky exteriors.  Part of each triangle is dipped generously in a tantalizing spiced raita-a traditional yogurt condiment mixed with cucumber and mint.  Yellow-orange mango slices and orange carrot slices punctuate the plate with appealing color explosions.  Upon biting into the samosa, my mouth is immediately hit with a pleasing assault of spicy heat from the spiced potato and pea mixture inside the buttery crust.  With expert timing, the cool raita swoops in and soothes my tongue, while simultaneously enlivening taste buds with citrus and mint.  Like any good street food, Monsoon’s Desi Chatt proves difficult to resist, fulfilling all our fried food yens while still maintaining an epicurean eloquence.

We are next served three whimsical cocktails: the punchy Bollywood Night, the tropical Passiontini, and a  Masala Hummus “cocktail”, served cheekily in a towering martini glass over a plate of garlic naan segments.  Both beverages transport the palate to paradisal destinations: the passionfruit and mango sweetness of the Passiontini and the minty, blackberry refreshment of the rum-based Bollywood Night balance the spicy heat of the meal and echo the exotic atmosphere.  The Masala Hummus is similarly refreshing, exciting the taste buds with unexpected flavor fusions.  The subtle dusting of garam masala transforms the traditional Lebanese dish into a tasty exemplar of harmonious cultural exchange.  The pungency of the garlic naan infuses the Hummus with a welcome intensity.

Our entrees arrive together in a dizzying array of aromas and colors, accompanied by a variety of chutneys and sweet and savory naan to complete the edible rainbow.  The startling red of the Chicken Tikka Masala catches my eye first.  Large chunks of tandoori chicken stew in a thick, red masala sauce over a contrastingly verdant bed of lettuce leaves.  The smoky char imparted by the tandoor oven distinguishes Monsoon’s chicken tikka from others I have tasted, adding textural integrity and a roasted heartiness to the typically soupy dish.  It is well paired with the Channa Masala, a spiced chickpea dish of satisfying simplicity.  Like the Chicken Tikka Masala, the Channa Masala is a study in texture: each plump chickpea balances the buttery softness and firm nuttiness of any expertly prepared legume.  With a similar flavor profile, the Channa Masala helps extend the pleasurable experience of the Chicken Tikka Masala, causing it to linger longer in the memory of our mouths.

The undisputed stars of this course, however, are the Lamb Korma and Dizzy Noo Shak.  In varying hues of umber and sienna, the two curries both complement and contrast each other visually and flavorfully.  The Korma’s onion pungency and saffron floral notes balance the gamey lamb, while the sprinkling of golden raisins in the dish add light, sweet accents and greater complexity.   The Dizzy Noo Shak similarly blends spice with sweet.  While as faultlessly authentic as the other entrees, this banana curry is rarely seen at Indian restaurants.  Chef Popat drew on her diverse upbringing to recreate this dish from her childhood in East Africa: its Swahili name and South Indian heritage trace the pattern of her family history around the globe and through her mother’s kitchen.  True to its inspiration, the Dizzy Noo Shak embodies the deep satisfaction and familiarity of a home cooked meal: the sweet starchiness of the banana is reinforced by the creamy coconut base, while the distinctive flavors of cumin, mustard seeds, and a multitude of more subtle spices add a curried savoriness to the dish.  It imparts a sweetness to the Lamb Korma’s dark heartiness.  Together they warm me to my core, expanding my notion of comfort food into new, exotic territories.

Three of the restaurant’s most popular desserts are temptingly presented on a platter brimming with vibrant strawberries, blackberries, raspberries, and kiwi half moons.  The Mango Mousse towers above the rest: a creamy orange confection served in a martini glass.  Light as a cloud, it dissolves into a sweetly ethereal mango vapor in the mouth, invigorated by the tartness of its fresh fruit accompaniment.  Monsoon’s Kheer, a traditional Indian rice pudding, stands next to the Mango Mousse in a preciously dainty parfait glass, topped with a fruity strawberry “flower” garnish.  Creamy, and nearly floral with cardamom, it is both light and rich, without the cloying sweetness of other puddings.  Departing from the silken desserts that precede them, the Chocolate Samosas are a textural enticement.  Drizzled with chocolate sauce, these flaky, buttery pastry triangles conceal delectable chocolate centers, resulting in a flavor delightfully reminiscent of pain au chocolat.  A bite of strawberry adds a tart decadence to the chocolate treats.

The aromas and taste memories expressed by Monsoon's culinary ideology cling to my senses long after our unwilling departure.  Blending the familiar with the exotic, regional specificity with notions of universality, Monsoon functions as an epicurean articulation of our growing globalized culture, and the potential pleasures yielded by harmonious cultural exchange.  It is a most delicious, forward-looking optimism. 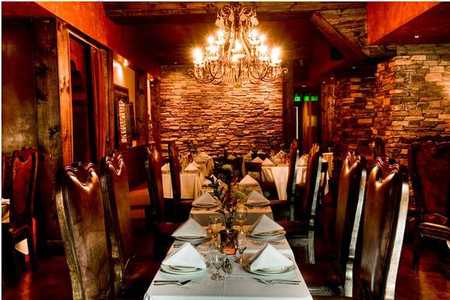 Are vegetarian dishes available?
Yes, Monsoon has a section on their menu with at least 19 vegetarian menu items.
Does Monsoon have a smoking section inside the restaurant?
No, as smoking is not permitted in any California restaurants.
What is the largest party size Monsoon can accommodate?
For large party events, Monsoon can accommodate groups up to 120 guests.
Do you have other locations?
No, but Monsoon has two sister restaurants. They are Bombay Exotic Cuisine of India in Hillcrest and Masala Spices of India which is also in the Gaslamp Quarter.
Do you have a lunch buffet?
Yes, there is a lunch buffet daily from 11am to 2:30pm for $13.95/person.
Do you have a dinner buffet?
Yes, on Monday nights from 5pm to 9pm for $19.95/person.
Are private rooms available for large parties? If so, what is the extra charge?
Monsoon does not have a private room, however, they do take large parties in their main dining room.

Monday-Sunday: 11:00am-11:00pm. This is a sample menu only. Prices and availability may be subject to change.

Our breads are freshly baked to order. Leavened bread, a must with curries and soups.

Your choice of the following dipped in a lentil batter, mildly spiced and deep fried