Restaurant is no longer open.

A Classic Steak and Chop House

I find myself a bit amused by the fact that delicious, high protein meals that are built around succulent, grilled red meats are now back in vogue. For so many years, those with a craving for such foods were sometimes viewed as if they were a bit perverse. In spite of political correctness, however, good taste and good sense have finally prevailed and we are now witnessing a resurgence of that recurrent American favorite, the classic chop and steak house.

Although there are a number of relative newcomers to the scene, Rainwater’s on Kettner truly set the local standard for the steakhouse over two decades ago when they were pretty much the only game in town for this type of high-end fare. The absolute quality of their prime cuts have never varied over that time and has been one of the primary factors in the maintenance of their continuing popularity.

Laurel and Paddy Rainwater are the consummate Host and Hostess and make every group that dines at their restaurant feel as if they are a part of the family. The service staff also executes well as an extension of this hospitality and ensures that, whether guests visit at lunch or dinner, they will always receive the same caring accommodation.

My guest and I visited early in the evening during the week and were immediately escorted to a generously proportioned booth that could have easily seated a party of six. We soon noted that our timing was perfect, because within ten more minutes several larger groups had arrived and were filling up the booths around us. Normally, this might have created a noisy distraction, but Rainwater’s low, well-insulated ceiling saved the day with its efficient acoustical design, which subdued the surrounding conversations to the point where they were barely noticeable.

Our amiable server, Keith, began our meal with a giant prawn cocktail that was comprised of a brace of huge Mexican shrimp that were nearly as rich as lobster tails. The condiments and sauce were delightfully tangy, but the quality seafood was the real star of this dish. I haven’t had shrimp this big for a long time. Paired with a crisp Italian Pinot Grigio, it was a dazzling prelude to the feast being prepared for us in the kitchen.

The salad course was both diverse and delicious. My guest enjoyed her crisp hearts of palm salad with Kalamata olives, Assiago cheese, mixed greens, and ripe tomatoes. I had an incredible throwback to the late 1950’s: a crisp, ice-cold wedge of lettuce smothered in one of the tastiest chunky blue cheese dressings that I’ve ever eaten. It was such “comfort food” that I polished my plate clean and actually even dreamed about it that night!

The entrées served were both exceptionally good. The parchment wrapped salmon that my guest ordered was wonderfully delicate and flaky and was accompanied by fresh, julienne vegetables and brown Basmati rice. I continued with my classic steakhouse theme and had the 10oz. New York strip steak with grilled asparagus. It went perfectly with my glass of California Cabernet Sauvignon. Keith then brought me a hot, bubbling side order of potatoes au gratin and a terrific relish of sautéed mushrooms, onions, bacon bits, and peppercorns for my steak. The flavor and tenderness simultaneously exploded in my mouth and brought back visions of some of the lavish birthday dinners that I had the good fortune to be treated to while I was growing up.

Although it might be hard for some to fathom, we also ended up sampling dessert as well. I tried one of the house favorites, Chocolate Lasagna, which was a rich block of chocolate-peanut butter ice cream drizzled with chocolate sauce and topped with whipped cream. My guest was enthralled with the fresh berry cobbler crowned with a light pastry lattice and powdered sugar and presented next to a scoop of rich French vanilla ice cream.

Eventually, we were able to extricate ourselves from our extremely comfortable booth and approach the elegant stairway that leads back down to the street level. But I couldn’t leave without first thanking Laurel and Paddy once again for taking me back to the “good old days” when a smile was really a smile …and a steak was REALLY a steak. 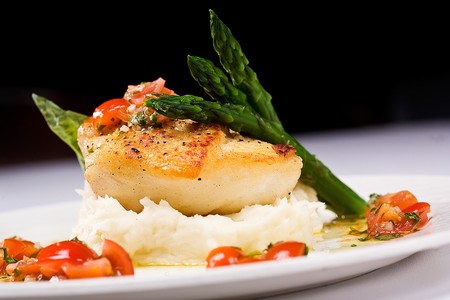 Rainwaters has been a favorite of ours for years and we know that when we go ,we will have the BEST meal ever and never be disappointed.Exceptional service and the *CHEF* Tino Lopez is very warm and gracious. You cant go wrong with anything he recommends on the Menu. He has been part of Rainwaters forever and makes us feel like family. His experience and cooking style is a tough act to follow. Absolutley the best in fine dining if you are in San Diego. We make the trip fom Az just to have dinner. (make sure he's in the kitchen when you make your reservation)It's worth the drive everytime!!!

Rainwater's was quite a dining experience. The service was fantastic as was the food. I had a prime ribeye steak covered with mushrooms. The mushrooms were on request but the server had no problem with it. It's on the pricey side but for a special occasion it's perfect.

We rarely eat red meat, so if we do we want perfection. This is it. Ambiance, service, food. Also, you don't feel like they are forcing extras on you, like Morton's and Donovans. Total class.

Ambience - 3, tries to achieve steak house/private club style but more like a hotel banquet room. Service - Waiter needed training. attentive, but seemed to get in the way frequently. A bit obsequious. Food - very good, but very overpriced and undistinguished. Wine list - incredible and long By the glass wine - incredibly expensive, needs some more creative touch on decent values - don't show vintages and lowest priced selection was $14.50. Most are in the $20-28 range. Prices - ostentatiously high and overpriced. Overall - this would be a decent weeknight "nice steak restaurant" if they charged half their current prices. Food was good though potato rosti (hash browns) were over-crispy and Tuna was very bland. I'm hoping to do better elsewhere in SD..