Royal India is where to go when you want to dine like kings and queens. The Gaslamp area restaurant serves authentic Northern Indian cuisine in a refreshing, elegant setting. An outdoor patio offers prime views of downtown foot traffic, while inside, the tall ceilings and open space give the feel of a modern palace, complete with regal décor imported from India. Ornate chandeliers cast an elegant glow, while a cascading waterfall offers a backdrop of serenity. The menu is as rich as its surroundings, with flavorful curries, tandoori kababs, and a tempting array of fresh tandoor-baked breads. If you’re unable to make your mind up about the menu, visit during lunch or on Monday evenings, when over 20 dishes are offered buffet-style.

A Royal Indian Delight in the Heart of Downtown

The first bite I had at Royal India won me over. It came just moments after I sat down, before I had even thought about what I was going to order. Two chutneys sat on the table, to accompany the plate of crisp papadums that had just arrived. The light, airy cardamom and lentil crackers broke easily, and I spooned a dollop of mint-cilantro chutney onto a piece. Then I took a bite. The chutney's flavors were multifarious, a vibrant, refreshing tang giving way to a subtle spice that lingered for minutes after I swallowed. My mouth felt like it was filled with layers of intrigue, the taste equivalent of a symphony. Complex and resonant, it was unlike anything I had tasted.

And that was just the first bite. The rest of my experience at Royal India brought dish after dish of intrigue, taking me on a wild ride through spices and flavors I wished I had discovered long ago.

The drivers of this flavorful ride are Sam and Jag Kambo, brothers who share the roles of co-executive chefs and owners. Their menu is an extensive collection of family recipes and original creations, with an emphasis on generations-old cooking methods. Dishes are given hours of preparation—enormous pots of flavorful curries simmer all day long, letting the flavors of onion, garlic, ginger, tomato, and spices slowly meld. Meats are marinated overnight before being slow-roasted in an 800-degree clay oven. The oven itself is imported from the brother’s hometown of Punjab, and is, according to Sam, an essential tool in preparing authentic cuisine.

The decor, too, hails from their homeland. "We built this space ourselves," Sam says with very modest pride for someone who spent nearly a year tearing apart the building's interior and rebuilding it from scratch. They imported gorgeous art from India—a hand-carved wood bar, and hand-carved bronze sculptures made by talented artisans. They sent a team of designers to India to copy the patterns of arches in royal palaces, and were gifted oil paintings from a talented artist and close friend. What they didn't import they selected with the finest eye—light, slate-like stone that forms the outermost walls, a stunning waterfall that stands before bronze statues of Indian gods and goddesses, and ornate crystal chandeliers that hang from the high ceilings. The result is transporting, a peaceful, serene space that seems miles away from the hectic nearby corner of Third and Market.

The restaurant features a weekday lunch buffet and a champagne brunch on weekends, but we visited for dinner. Seated at a quiet table in the peaceful space—the tables are intentionally spread far apart to provide the rare privilege of privacy—a feast slowly unfolded before our eyes. After the flavorful but slightly spicy chutneys, we were enticed by the specialty cocktails, which seemed designed to provide sweet refreshment between spicy bites. The Royal Mojito offered a sweet, refreshing blend of mint, syrup, and rum, served with a splash of 10-year aged Indian rum floating on tip. The Mango Martini was sweet blend of mango puree and vodka that was so thick it seemed more like a smoothie than a martini.

One of many tempting starters, the Spicy Onion and Cabbage Bhaji was addictive and flavorful. Thin slivers of onion and cabbage were coated in a thick batter of ground chickpeas and spices and deep fried. Biting through the crisp coating, we were rewarded with a sweet, moist filling, but it was the batter that was the alluring part—the thick, deep flavor of chickpeas and the subtle complexity of spices lent a crisp and savory dimension to every bite.

The Shahi Bread Basket allowed us to sample several versions of fresh tandoor-baked Nan bread, including plain, garlic, and paneer. Each arrived too hot to touch, having literally been baked seconds before. The nan, we learned, is baked using a traditional method that dates back generations: after stretching the dough flat, a chef skillfully (and carefully) sticks an arm elbow-deep into the burning oven, slapping the dough to the side of the wall. Because of the oven walls, made from clay from the Punjabi region of India, are extremely porous, the dough sticks to the clay as it cooks, which only takes minutes. "If the oven was built with clay from this region [San Diego]," Sam explains, "it wouldn't work." There may be no more satisfying moment in a meal than pulling apart fresh, steaming bread; in this case the pleasure was in a crisp, toasted outside giving way to a soft, doughy center.

Exotic Mango Soup was one of many delightful surprises. Expecting a bright soup the color of my mango martini, I was pleasantly surprised when silver bowls arrived filled with a deep rust-colored liquid. The thick soup featured pureed mango blended with a curry-like concoction of tomatoes, garlic, ginger, and onion. As deep-flavored as it was, the texture was amazingly light and airy. We ate spoonful after spoonful, relishing in the marriage of flavors between mango and spices.

In addition to baking nan, the tandoor oven is used to mesquite-roast meats, again using a traditional method. The oven opens from the top, allowing skewers of meat to dangle above mesquite coals while fat naturally drips toward the bottom of the oven. The result is lean but flavorful meat that is astonishingly tender. The section of Tandoori Specialties on the menu includes chicken, fish, shrimp, and lamb, all of which are marinated in a yogurt and spice mixture overnight. The Chicken Tikka Kabab featured moist, tender chicken, dyed a bright, vibrant orange from the overnight marinade. The plump pieces pulled apart gently, imparting a flavor that mingled the sweet taste of the meat with the unmistakable flavor of a traditional yogurt marinade. While I had dined on tandoori dozens of times, I had never found meat this moist and sweet. Perhaps it was the imported oven, or some secret to the marinade, but the chicken was outstanding.

Curry is a specialty of the house, and indeed Sam and Jag serve more curries than anything else on the menu. There are at least 30 to choose from, with ingredients that include chicken, lamb, shrimp, fish, lobster, and vegetables. There is an extensive selection of vegetarian preparations as well as some very unique house specialties. The traditional can be found—there are several masala, vindaloo, and korma dishes—but the gems lie in the unique and the unusual.

The Butter Tarka with shrimp, featuring a vibrant red curry sauce and oversized, tender shrimp, was indicative of the brother's Punjabi roots. The butter-based sauce was rich and powerful, tempering the tomatoes, and allowing subtle spices, garlic, and onion to develop on the palate. The shrimp eagerly embraced the feisty sauce, their tenderness a delight in each bite. It was a close call, but I eventually declared this a favorite.

Chicken Coconut Pineapple was another unique rendition, this one incorporating the usually-Thai ingredient of coconut milk. This was a feisty and exciting curry, a deep brown mixture of sweetness and spice. Large pieces of pineapple mingled with larger chunks of chicken, and we delighted in discovering the chicken was far more tender than the fruit. Slow cooked for hours, this was the most succulent boneless chicken I'd tasted. It practically melted in the mouth, absorbing the sauce's flavors with grace.

Vegetarian Chilli Ginger Masala was the spiciest dish we tried, and its feisty flavors were playful and teasing. The dish was chock full of vegetables—cauliflower, broccoli, carrots, zucchini, yellow squash, and peppers. Each tender vegetable soaked up the feisty sauce in its own way, making the vegetarian version just as filling and complex as any other, and perhaps more so. Like its predecessors, the sauce was bewitching and complex, with a tomato-forward sweetness that gave way to a spicy finish of ginger and green chilies.

The Lamb Shank Curry offered the most impressive presentation of the evening, a whole bone-in lamb shank sprawled across a bed of deep purple curry sauce. Slow-roasted in its sauce for eight hours, the lamb was fall-apart tender, while the sauce soaked up the lamb's distinctive flavor. Rather than being overpowered by the lamb, however, the sauce offered a sweet complexity that paired with the lamb’s resonant flavor. Some bites seemed dominated by lamb, others by sweet spices. Each bite was a rich and satisfying arena of flavor.

Dessert always seems most appealing to me after a spicy meal, and Royal India offers an array of sweets that gladly wash away all traces of spice. Pistachio Ice Cream was a simple treat, two scoops of bright green topped with crushed pistachio nuts. The unmistakable pistachio flavor was cold and sweet, and we relished in each scoop's hidden center: whole almonds, waiting to be discovered.

But the real treat was the Rusmalai, a dish of soft Indian cheese cooked in a sweet syrup, served with rich cream and crushed pistachio nuts. The dish was truly unlike anything I'd ever tasted, a honeyed sweetness giving way to an almost smoky, milky flavor. It was as intriguing as each dish that preceded it, and a fitting conclusion to a meal that, from the first bite to the last, proved wondrous and alluring. 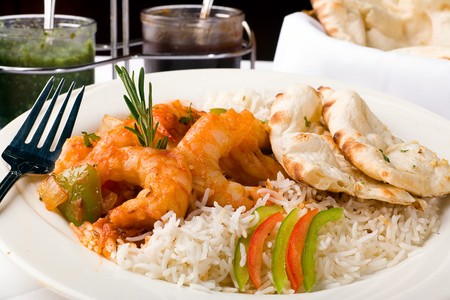 How is your bread cooked?
On the interior wall of the restaurant's tandoor (clay oven)

Monday-Sunday: 11:00am-2:30pm. This is a sample menu only. Prices and availability may be subject to change.

Monday-Sunday: 11:00am-10:30pm. This is a sample menu only. Prices and availability may be subject to change.

Dal Shorba 6.00
A healthy and delicious blend of a variety of lentils, garlic, herbs and mild spices
Mulligatawney 8.00
Delicately spiced soup made from roasted chicken and lentils
Cream Of Tomatoes 8.00
Vine ripened pureed tomatoes simmered with cinnamon
Exotic Mango 8.00
A perfect balance of sweet and tangy cooked with cumin and black peppercorns

Curry is a healty blend of onions, tomatoes, garlic, ginger, spices, and herbs. All curries are made from the finest ingredients and fresh vegetables. Served with imported basmati rice, additional rice: Add $3.00

Select your curry and combine with your choice of chicken, lamb, shrimp, fish, lobster meat, or vegetables.

Rice and fresh vegetables sauteed together with golden raisins, almonds and coconut your choice of one of the following

The food is excellent, but the service was slow.