Known and loved by many as a charming restaurant and bakery, The French Gourmet also boasts impressive credentials as a full-service catering business. This San Diego favorite has been conjuring up decadent and flavorful delicacies from scratch in its kitchen, and then serving them to loyal patrons inside and out of the dining room since 1979. Breakfast, lunch, and dinner become casual yet decadent holidays at The French Gourmet, where fresh pastries, classic hors d’oeuvres, and house-made specialties mingle with award-winning wines. Set in an intimate space bathed in natural light during the day and a romantic glow in the evening, guests feel quite at home indulging on rustic French staples and truly innovative treats. It seems only natural then that The French Gourmet would be chosen so often to cater memorable events and unique moments.

The north end of Pacific Beach isn’t exactly what one mentally conjures when a hankering for French cuisine takes hold.  Burgers?  Sure.  The omnipresent California Burrito?  Obviously.  Cuisses de Grenouille Provençale or Coquille St. Jaques?  …Not so much.  And yet a place for such things exists.  Nay… prospers, thrives, and flourishes in an area of town better known for its surf than any continental restaurant. The French Gourmet is a restaurant/bakery that specializes in yes, French cuisine. And yet, The French Gourmet isn’t a restaurant, really.  It isn’t a bakery.  It isn’t a wine boutique, catering operation, or any other term used to try to describe it.  The French Gourmet is partially all of those things but collectively it is something different, it is an idea.  The French Gourmet is a concept within four walls that strives to change people’s lives for the better through food, drink, conversation and laughter.

Thirty-five years ago Michel Malecot opened the doors to the French Gourmet for the people of San Diego.  In order to get his restaurant started, he began by cooking meals in people’s homes for special occasions.  Many of The French Gourmet’s original regulars still come in and regale newer members of the staff with stories about Michel’s early kitchen prowess.  This tradition continues to this day, as a good majority of their business is still catering oriented.  A brief glance over the restaurant’s menus confirms what French Gourmet diehards have been proclaiming all these years.  The breakfast menu has everything from Duck Confit Benedict to Florentine Crepes.  The lunch menu doesn’t lack in tasty options either, from the traditional French ‘Salade Niçoise’, to ‘Moroccan Chicken’, and even their own ‘French Gourmet Burger’.

No French restaurant would be worth its salt if it didn’t have at least a few offerings of a little vino.  The French Gourmet is certainly no exception, as their wine list boasts more than twenty by the glass, and eleven pages of wines from France, California, and beyond.  Their list is a great blending of old world and new world styles and appellations.

My colleague and I pull up around five, each of us remarking on the ample street parking.  We stroll in to the humble tan building having no idea as to what kind of epicurean delights await us.  The first thing we encounter is a smiling man standing behind a classic bakery display full of cupcakes, crepes, cakes, and cookies of all kinds.  He sees my confused look and laughs, directing my attention to the left.  Just past the bakery counter is the restaurant portion of the operation. Only fourteen tables sitting close to each other occupy the main dining room of The French Gourmet.  “We like to have people become friends!”  The maître’d tells me.

Michael “Frenchy” Simpson is the maître’d.  He is also the general manager, dinner server, and jack-of-all trades for the French Gourmet. He is a grinning, friendly, French-accented physical embodiment of the ideal that The French Gourmet espouses; a busy, spinning whirligig of different jobs.  Originally from Paris, Simpson excitedly begins the meal by offering us one of their most popular options- the ‘$25 Three Course Prix Fixe’ with a wine pairing.  I ask him who orchestrates the wine pairing and he says, “I do.  I am the sommelier.”  I mentally add that to his list of titles.  We decide that if that’s what Michael is the most excited about, that is what we should go for.

As we wait for our first course, Michael brings us a glass of ‘09 Pardon & Fils Bourgogne Rouge and a glass of ’09 Louis Latour Chassange Montrachet, both of which are nothing short of fantastic.  Being from Northern California, I tend to veer toward the classic cabernet, but the nuances of these French wines have me re-examining my vino values.  A few slices into the homemade baguette (quite literally made just a few feet from where we sit), and the appetizers arrive.

The Pâté Maison Sampler consists of duck, chicken, and what they refer to as “country”.  In our case the “country” is pork, and it is awesome.  Concentrating on my desire for the duck pâté, I am caught off guard by the pork, which I find to be deep and rich.  Served with onion

chutney, cornichons, and Greek-style Petrou olives, I am drawn most to the house made pickles.  Crunchy and zesty with just the right amount of brine, they balance out the smooth pâté wonderfully.

The other dish Michael brings us for our appetizer is the Cold-Smoked French Herring with Warm Potato Salad.  “A true French dish!” he exclaims, setting it down before us.  The herring is a continental delight.  Slightly chewy without being tough, it retains a good amount of smokiness to it, while balancing with the natural flavor of the fish.  The ‘Warm Potato Salad’ is nothing like what I expect it to be.  Imagining a heavy picnic-like salad that threatens to drown out the subtle flavors of the fish, I am elated to find it is more along the lines of a warm bed of fingerling potatoes, dusted with rosemary and just a drizzle of oil.  Rather than competing with the fish, we both agree the potatoes complement it well.

Up next is our main course.  Michael starts us off with glasses of the ’99 Baron Philipe de Rothschild Bordeaux and the ’04 O’Brien Seduction Meritage, and brings out our dishes after just a moment.  Both the Coq Au Vin and the Bordeaux Braised Short Ribs look delicious, so we opt to divvy up both plates evenly so neither of us misses out on the delicacies.

We are informed that while coq au vin is translated to mean ‘rooster,’ most places generally use chicken.  “Not us!” Michael proclaims.  “We do it right!”  And right he is.  Earthy and herbal, the meat is tender and succulent.  After a few glorious bites, the Bordeaux Braised Short Ribs begin beckoning my fork over.

The yang to the Coq Au Vin’s yin, the meat is deep and bold; the red wine reduction is full of flavor.  This hearty dish is roasted a minimum of six hours Michael informs us, and it certainly tastes so.  The Potatoes Au Gratin is the recommended side dish of choice by the ever more infallible Michael and boy-oh-boy is he right.  A heavy helping of this cheesy wonder has me reaching for my napkin to wipe the tears of joy from my eyes.

After all of this, we are starting to become very full, but Michael insists that being at a French bakery means it is almost illegal to not try dessert.  Figuring he has brought us this far in our culinary adventure, we decide to take the last grand step toward desert.  The Crème Brulée is amazing, just the right amount of “shelling” on the top, rich and smooth underneath.  Nobody does subtle decadence like the French, and the grandiloquence of this dish is not to be missed.

The Nutella and Chocolate Ganache Crepes are enough to get Foucault to lighten up.  The crepe itself is spongy, warm, and fresh.  The Nutella and Ganache combination is perfectly sweet and smooth as silk.  Our deserts are paired wonderfully with a port and a Muscat, each slightly sweet, but with enough fortification to balance out the richness of the chocolate.

It is still early in the evening as we finish our meal and Michael suggests we take a tour of the building.  I think it a bit odd, but after the dining experience we have thus far encountered, I am kind of curious to see just how this magic is created.  I am blown away by the size of what I thought was a relatively small operation, and Michael informs us that the amount of space was necessary.  He reminds me, “We aren’t just a restaurant.  We are a bakery and a full-fledged catering business as well.”  I am impressed with the multitude of kitchens and rooms of delicious smelling mysteries.  By the time we make it back to the restaurant proper, the small dining room is beginning to fill up.  Michael excuses himself to go do one of his thirty-seven jobs, but before he leaves he invites us to their Sunday tasting.  “Its bubbly and Bordeaux- hors D’oeurves and some delicious wine.  Get here early, we’re gonna be full!”  If it’s remotely as good as the dinner we just had, I have no doubts they will be.

Insider Tip:  Don’t skimp on dessert.  How often do you get to eat in a French bakery, really?  Also, while they do have a full bar, their wine offerings are top-notch.  Don’t miss out on some really great offerings from across the pond! 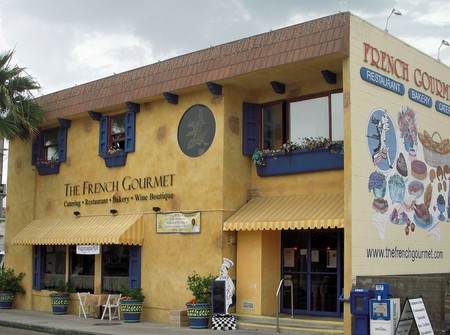 We use Locally Grown Farm Fresh Eggs from Eben-Haezer Poultry Ranch in Ramona <br> Omelettes can be made with egg whites upon request. <br> Most menu items are served with fried garlic and parsley potatoes unless otherwise noted.

Served with your choice of coleslaw, French fries, sweet potato fries, or small mixed green salad and our homemade vinaigrette

Place your order by calling (858)488-1725 ext:316. Take out menu is available after 4:00 p.m.***No substitutions. Menu subject to change without notice. Please understand that market conditions change daily. If a menu item fails to meet out standards, it will not be offered. No coupons accepted on To-Go Menu.***

The French Gourmet Dinner-for-Two 50.00
Your choice of any two entrees, salad, and one dessert to share with freshly-baked baguette and a bottle of house red, white, or rose wine