New York’s prized seafood and steakhouse is now in San Diego’s posh East Village. Still family owned and 30 locations strong, The Palm continues to follow tradition as instilled by its founders. Exceptional service and quality American cuisine with signature Italian dishes make The Palm a familiar destination that diners around the country have enjoyed for over 80 years. Centrally located downtown near the ballpark and the convention center, guests can enjoy dinner among friends and family in a warm nostalgic setting. No matter what the occasion – The Palm is a prime choice for great food and hospitality.

Made in New York. Built on Tradition.

Much of San Diego’s landscape is made up of restaurants – particularly steak and seafood houses. For many, this poses a dilemma when trying to decide where to eat. Diners certainly have their pick of elegant, trendy, and family steak houses, but The Palm Restaurant in East Village is a rare breed; it lends itself to tradition – carrying on a family legacy that spans over 80 years.

Two chief ingredients attribute to The Palm Restaurant chain’s longevity – their products and the dining experience. They stand behind their prime-aged USDA beef from their own wholesale meat company and their gargantuan 3-to-10 lb. lobsters from Nova Scotia, Canada. Just like the food, prime hospitality is also an order.

The origin of this reputation dates back to the restaurant’s beginning in 1926 New York. Founders, John Ganzi and Pio Bozzi from Parma, opened their first Italian restaurant on Second Avenue in Manhattan. Not part of their initial plan was naming the restaurant The Palm. Due to the language barrier, the intended name, Parma, was mispronounced when the owners acquired their business license. Despite their initial disappointment, they kept the name.

Another part of the owners’ original plan was to serve traditional Italian cuisine. But after one request for a steak led to multiple requests, the owners decided it was time to stop running down the street to the local butcher; it made more sense to just add steak to the menu. Today, Italian cuisine remains an essential part of the restaurant legacy, but steak is The Palm Restaurant’s claim to fame.

The visual style of The Palm started to take shape in the late 20s when cartoonists and caricature artists from the local press started creating wall art in exchange for meals – a pretty fair quid pro quo even by today’s standards. Before long, cartoons such as “Popeye,” comic book characters such as “Batman,” and caricatures of regulars, businessmen, politicians, and celebrities were plastered all over The Palm Restaurant walls.

Since The Palm San Diego opened – a year after the nearby Petco Ballpark opened in 2004 – foot traffic in the neighborhood has gradually gained momentum. Considered a stylish, vibrant part of downtown San Diego, The Palm has been an integral part of what has made the East Village become such a desirable destination. The restaurant’s close proximity to the Convention Center is also ideal. Previously a large warehouse, the restaurants upstairs is devoted entirely to banquet seating. Multiple rooms with multi-media capabilities are able to accommodate groups from 10 to 300 – making it easy for convention related events to carry over to the restaurant. Another major advantage – The Palm has no room rental fees.

The Palm serves dinner nightly starting at 4 p.m. The busiest times are from 7 - 9 p.m. and reservations are recommended. Valet parking is also available.

We dined on a Thursday evening just before 6 p.m. To our immediate left when we entered was the staircase leading to the upstairs banquet space. As we proceeded forward, the long diagonally shaped walk way led us directly to the host desk. Along the wall on the right were plush brown leather seats with caricatures and cartoon sketches directly above them. Behind the host desk was the main dining room facing J Street. The room had a warm masculine charm with its dark wood chairs, booths, and wall panels, and the white table cloths added a classy panache.

The managers were well-dressed in suits and the servers wore long white bistro-style aprons with white shirts beneath. The general manager, Bryan Lytle, graciously received us at the host desk. He gave us a choice of dining in the quieter main dining room or in the lively dining area near the bar; lively sounded good, so Bryan led the way to our booth overlooking 6th Avenue. Past the extensive oblong bar with tall leather bar stools was a well stocked full-bar manned by Anthony the bartender.

As we were seated, a restaurant regular on his way out stopped Bryan to thank him for a great meal. Bryan then presented us with the dinner menu and described each pre-selected dish that Executive Chef John Reynolds was preparing for us. Our objective was to taste the signature Surf ‘n Turf and the most popular dishes from each course.

Our attentive server Brooks then came-by to introduce himself and leave the wine and cocktail menu for perusing. Saturated with playfully named alcoholic beverages, it was hard to decide.

Since baseball season was in the air – quite literally with the Padres vs. Dodgers game on the multiple flat screen TVs overhead – I ordered the “Spring Fever” cocktail. It was more than the name that won me over, it was the ingredients. Muddled fresh basil and cucumber with lemon juice and agave nectar, plus a shot of Prairie Organic Vodka served up was just what the doctor ordered. The thick slice of English cucumber wedged on top of the martini glass was a nice visual touch; it also served as a refreshing amuse-bouche.

Since the Padres were in town that night, a large enthusiastic group of Padres fans, with kids too, were there to enjoy a meal from the special Game Day Menu (offered on Wednesday and Thursday game days starting at 2 p.m. in the bar).

The Palm also has its own Happy Hour called “Prime Time” on weekdays in the bar from 4:30 - 6:30 p.m. “Prime Bites,” consisting of Kobe Beef Sliders, Mini Broiled Crab Cakes, and several other dishes are available for only $3.50 per plate. Best of all – the offer is ongoing.

Before getting started, we ordered a large bottle of sparkling Pellegrino to help cleans our palette after each course. Our first dish of the night was the Sesame Encrusted Seared Ahi. Beautifully presented, the thin, lightly seared Ahi slices were fanned out over a lightly dressed seaweed salad with a finely sliced swirl of pickled ginger and a wafer size dollop of wasabi beside it. The soy vinaigrette beneath the fresh delicate Ahi also added just the right amount of salty contrast. A dish this size could easily fill one person. Sharing between two or three people, to save room for more courses, is recommended.

The popular Shrimp Bruno appetizer is a dish you might want to keep all to yourself, as most shrimp lovers would have no trouble finishing three jumbo prawns. When the dish arrived, a pungent mustard aroma swept in from the lightly sautéed prawns (a la Française) in a rich Dijon mustard sauce. The pale yellow sauce was somewhat deceiving. We imagined a mild creamy sauce. Instead, there was an explosion of bold mustardy, lemon zesty flavors that lingered in the mouth long after each luscious bite. Ingredients such as the white wine and chicken stock were excellent smoothing components to help tame the robust flavors. Extra lemon wedges were also served on the side.

By the glass, there are nearly a dozen white wines and over a dozen reds to choose from. To complement our steak on the way, we each decided to sample different wines. Per our server Brooks’ recommendation, I tried the ‘08 Fourteen Hands Merlot from Washington. My guest ordered the ‘08 Tierra Secreta Mendoza Malbec. The medium bodied Merlot I tried was nice and earthy, packed with fruit. The Malbec from Argentina, also very good, was spicy and full-bodied with hints of oak.

Our 16 ounce New York Strip arrived solo on a plate lightly speckled with parsley. Starved in anticipation for our first taste of the house specialty, we prepared our minds, and our mouths, for something wonderful. Once placed before us, we could now see for ourselves what the rest of country has been raving about for decades. The end result of this highly anticipated dish was a mouth-watering vision of glistening char-broiled deliciousness prepared to a perfect medium-rare – the preferred temperature when tasting any cut of prime beef. The tender buttery flavor from the marbling and aging of the USDA prime beef sent our taste buds adrift. While we shared this generous portion of quality beef, we nearly forgot about the “Surf” counterpart of this dish.

Moments later, the Jumbo Nova Scotia Lobster was served. At first sight, we were floored by the size of this whole 4 lb. lobster served with melted clarified butter and lemon; it was quite the spectacle, as were the lobster bibs we had to wear. Adding to our enjoyment during this highlight of the evening, the enormous lobster claw meat was expertly removed from the shell, table-side, fully intact. The sweet, tender semi-firm meat was everything Nova Scotian lobster aficionados claim it to be in the Maritime Province; the land of the lobster. Thoroughly impressed by the presentation and delightfully rich flavor, we devoured every last bite of this succulent taste of Nova Scotia.

Since side dishes are served family style, one dish between two people is plenty. For most, two sides are more than enough. The Three Cheese Potatoes served with our Surf ‘n Turf was an excellent satisfying choice. Rich bubbling formaggio covered the baking dish like a creamy cannelloni. After one taste of this seriously cheesy dish, we were in cheese heaven.

Afterward, we sipped a lovely 2003 Taylor’s Port – an elegant full-bodied vintage with medium sweetness – an excellent accompaniment with our sinful dessert.

Dieters beware – There’s a chocolate cake flown in special from Sweet Street Desserts in Pennsylvania that’s to die for. With the large steak knife pierced through the center, the message implied “eat me, or else.” So we did. Served chilled, the scrumptious mountain high slice of dreamy dark chocolate with creamy frosting, not overly sweet, was delectably smooth and indisputably irresistible. Though we paid the price in calories, we chose wisely.

With The Palm Restaurant’s east coast flair, incredible signature dishes, and impeccable service, it’s not hard to find a reason or two or three to go back. The welcome you feel from the moment you enter 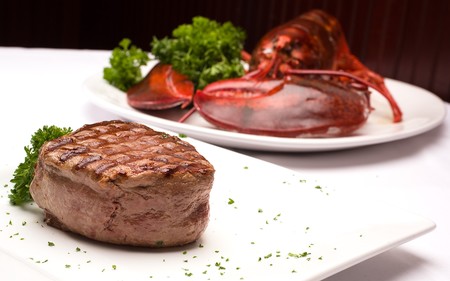 How far is your restaurant from the Convention Center?
The restaurant is .6 miles away from the Convention Center, which is about a 3 minute drive, or an 8 minute walk.
Do you have valet parking?
Valet Parking available $ 12 weeknights $ 15 weekends *$ 25 baseball game days *with validation Limited self parking available on streets and near by parking garages.
Where do you buy your steaks from?
The Palm runs its own meat wholesale company to ensure the quality of its steaks.
Does The Palm have restaurants in different cities?
Yes, The Palm has 26 restaurants in cities across the Untied States, as well restaurants in London, Mexico, and Puerto Rico.
Is this restaurant open for lunch?
No, The Palm - San Diego is only open for dinner 7 nights a week, beginning at 4pm.
What is the dress code for this restaurant?
The Palm's dress code is business casual.

Choice of... Add a Whole 3 lb. Jumbo Nova Scotia Lobster as an entrée choice for an additional $27.90 per person.