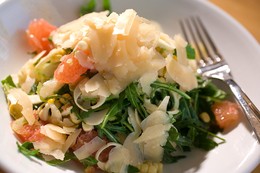 Executive Chef Barclay Dodge has truly dedicated his life to following his passion for cooking.  Beginning his career at the age of 17 in his hometown of Aspen, Colorado, Chef Dodge worked in local restaurants washing dishes, prepping the kitchen, and bussing tables.  After a few years working at the bottom of the culinary food chain, Chef Dodge decided to move to San Francisco to attend the California Culinary Academy. During his time in San Francisco, Chef Dodge worked in some of the city’s best restaurants. Hankering to go abroad, he moved to the Mediterranean, traveling throughout France, Italy, Spain, and Morocco.

Chef Dodge experienced a variety of cultures, which impacted his cooking and transformed him into an avid traveler. Chef Dodge Returned to the States working as a line cook for Charles Dale of Renaissance Restaurant in his hometown of Aspen, and quickly rose through the ranks to the honored position of Chef de Cuisine.

The turning point in Chef Dodge’s culinary career is the time he spent in Spain working under the tutelage of Ferran Aria at El Bulli, the acclaimed Michelin two-star restaurant. Dodge spent the next year in Spain, later working at another Michelin two-star restaurant Can Caig in beautiful Barcelona. After learning the intricacies of Catalonian cooking, Dodge returned to the States, opening Restaurant Mogador – the culmination of his culinary endeavors abroad.  He continued to study abroad in Spain during his off time-- balancing time in Spain with time at his restaurant. While running Restaurant Mogador, Dodge cooked at the James Beard House, winning the Distinguished Restaurants of North America Award (DiRoNA). Chef Dodge went on to work at the Rancho Valencia Restaurant, located in the Rancho Valencia Resort and Spa. He now brings his international culinary skill as Executive Chef for Whisknladle.

We sat down with the Chef to get to the bottom of his cooking philosophy, and we got a surprising explanation. Dodge’s cooking philosophy is all about the vegetables. According to the chef, he aims to cook with the best produce that he can find. Spending every day at the farm picking locally grown and organic produce, Chef Dodge makes his dishes in a way that brings out the flavors of the produce. He cooks the meat in a way that complements the tastiness of the vegetables.

We then asked the Chef how his patrons receive the exotic items available on the Dinner Menu. His response was frank--San Diego does not offer a large variety of cuisine. He hopes to expand that palate of San Diegans by using high quality ingredients for all of his dishes, especially for the more unusual dishes offered. In the Chef’s opinion, the quality of the food speaks for itself.

Whisknladle’s dinner menu focuses on Mediterranean style comfort food with delicious but unexpected ingredients. The menu is constantly changing depending on any ideas that the Chef has for a dish. He runs with every idea he has-- never holding back. Chef Dodge is the personification of innovative cooking, with his passion for fresh ingredients evident in every dish that leaves his kitchen.