Where else can you get good music, over 250 beers on tap, and excellent food? Though named for its yard-tall beer glasses, the Yard House offers more than just a pub experience. Among the traditional burger fare appear elegant dishes that rival less casual, fine dining establishments. A sizable wine list holds its own alongside the beer and spirits. The Yard House is an equally ideal gathering place for happy hour, a business lunch, or a large dinner party because everyone, from the burger-lover to the gourmet connoisseur, is likely to find something that pleases their palate.

In 1996, Steele Platt opened the first Yard House in Long Beach, California, while pursuing his vision of founding ‘the great American beer hall’, which would serve fine brews from over 250 various taps of draft beer and would have a state of the art, digital sound system as well as an extensive food menu that offering at least 100 items. Since that era nearly a decade ago, the Long Beach Yard House has become one of the 50 top grossing restaurants in the entire United States.

Up to this point in time, the idea that a brew house could successfully offer not only standard pub beverages and fare, but also an eclectic array of sophisticated menu choices had been an untried concept; but Mr. Platt was obviously on to something big. The success of his original Long Beach restaurant eventually led to the opening of nine other locations, one of which can be found at the intersection of Fourth Avenue and Broadway in downtown San Diego.

A Padre game had just ended at nearby Petco Park on the weeknight that we visited, which made for a lively, vibrant atmosphere that was a lot more like what one might encounter on a Saturday night. We were led past their impressive bar by the hostess, and seated in a comfortable booth near the rear of the dining area.

Our friendly server, Jessica, promptly arrived at our table and offered us a few of their specialty libations to begin the meal. My guest had a chilled glass of crisp, Angeline Russian River Chardonnay, while I decided to try one of their famous ‘yard of ale’ selections; in this case, a well-hopped Anderson Valley Boont Amber Ale that was also from northern California.

A traditional Scottish measure of volume, the ‘yard of ale’ is roughly 2.5 pints (1.4 liters) and is served in a slender, yard-tall glass with a bulbous base that causes the brew to rapidly rush forth as the beverage is consumed. I can assure you that learning to drink gracefully from one of these glasses is a practiced art.

The menu at the Yard House is diverse, to say the least. In addition to all of the typical ‘pub grub’ that one might expect, such as burgers, sandwiches and finger foods, Chef de Cuisine Dan Castillo oversees the preparation of a bevy of fine dining favorites that are designed to delight the most fastidious gourmet palate. One example of this type of fare is their succulent, shrimp lettuce wraps, which are made with pine nuts, tofu, green onions and three delicious dipping sauces. The flavors and textures in this tasty appetizer were refined, delicate and of the highest quality.

While I was still working on my yard of ale, Jessica showed up with a magnificent ‘Ahi Crunchy’ salad that was comprised of Sashimi grade, seared Ahi, mixed spring greens, crispy won tons and a tempting soy vinaigrette. The generous chunks of tuna were perfectly balanced by the slightly tart greens and crisp won tons, and were an Ahi lovers dream.

The best, however, was yet to come, as our smiling server placed our entrées before us with a flourish. My guest practically swooned at the first bite of her Pepper Crusted Filet Mignon, which weighed over half a pound, was fork-tender and came with a rich brandy cream sauce and freshly steamed asparagus. I had another of their house favorites, the fantastic Crab-Crusted Swordfish. The fish was exceptionally fresh, artfully grilled and topped with a splendid crabmeat mixture and stacked onto a small mountain of tangy, wasabi mashed potatoes and julienne vegetables. Both of these main courses were of a quality that was equal to the finest gourmet restaurants in the city.

The Yard House is a perfect restaurant to bring large parties of diners who may have vastly different values in regard to their levels of taste and sophistication. Just as its founder, Steele Platt envisioned almost a decade ago; it is a place that offers something to satisfy the gastronomic desires of nearly everyone who passes through their doors. 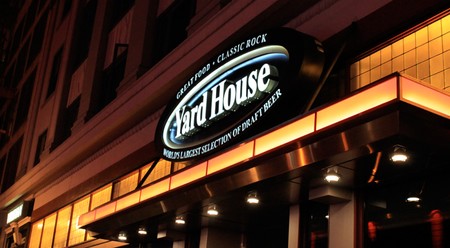 Is this a kid-friendly restaurant?

Yard House does feature a "Kid's Klub" menu with several kid-friendly meal options for those 12 and under, though the bar atmosphere of the restaurant may be considered more adult-oriented.

What is your valet parking fee?

Valet parking is only offered Thursday, Friday and Saturday for dinner. The price is $15 per vehicle.

A Salad or a Cup of Soup

It was my birthday and my girlfriend and I decided to try the Yard House for a change. I wasn't too happy about the parking arrangement(you either have to pay $8 for public parking lots, or a street spot loaded with meters), and the music was very loud. But, the food was fantastic! I will definitely be back!

I've been to several Yard Houses in Southern California and find them to be consistent. Mediocre service, noisy atmosphere, but a top notch beer selection and very good food. Happy hour offers some great deals, but ends a little early at 6:00. Some of my favorite menu selections are the Crunchy Ahi Salad, the pizzas, the chopped salad, and especially the garlic noodles!

I had made a reservation for 25 people and we arrived, and they still didn't have the tables ready reserved. We had to wait until they prepared the tables. The service was awful, the waiters took forever to ask us to order beverages. Finally they brought the beverages and again took about 20 minutes for us to order food. Yeah the restaurant was full but that doesnt mean service has to be too slow when there is a reservation made. At least the food didnt take long to be made, about 20 minutes of wait. I ordered "Vodka Shrimp Pasta" for $16.00 and it was worth every penny. Very well served for up to 2 people it could of worked out. I usually never finish all pasta in restaurants, but this was the best pasta ever!! I left the plate clean. I would go again just to eat that pasta!! =) My date and other friends ordered the specialty of hamburgers or steak. Very well served and said it was delicious!! =) Again service could be bad, but what matters is the food. I would recommend it for having great quality food and being well served. I would say its one of the best restaurants in GASLAMP QUARTER that includes luxury, a variety of list of drinks, and well served food that tastes delicious all in one. Definitely a place to go for any ocassion. =) Will go soon again!! -meli

My frind and I went to Yard House at 8:30 on Friday and the place was very busy. The waiting list quote was 45 minutes and turned out to be accurate. Huge selection of beers at the bar. Once seated service was prompt and adequate. We had the egg roll appetizer and it was very good. Friend had pasta and I had the entree salmon over mashed potatoes and both were very good. Nice looking presentation, plenty of food, good flavors.

Laid back atmosphere, ESPN playing on all the t.v.'s. They had a huge selection of beer. I ordered the New York Steak Sandiwch. The steak did not come shreaded so I ended up taking the sandwich apart and eating it in parts. The bread was good, the sauce excellent -it gave the steak a lot of flavor. The sweet potatoe fries were sooo good. They are now my favorite fries ever. I'd go just to eat the fries. The lemon souflee cake was a little too sweet.

If you want fancy and gourmet, then the Yard House isn't the place for you. If you want great food and great beers from all over the world, then it's perfect. The Yard House has "upscale" bar food and an American Menu. It is one of the largest and extensive menus I have ever seen in any restaurant of its kind. If you're not sure what you are in the mood for, you will find something you like at the Yard House. As far as their extensive draft and microbrew beer selection--it is wonderful. I highly recommend this place for an intimate dinner for two, a large group outing, or a fun night out at the bars. Depending on what time you arrive, all of these options are possible...and FUN!

Best Cheeseburger I think I have ever had!!!! Too many beers on tap to count! Will be there again.

went for an office "party". We had a good selection of bar food (and beer). I will go again.