A Cote restaurant is symbolic of Oakland’s Rockridge neighborhood--cozy, friendly, and inviting. Jack and Daphne Knowles planned it that way, and their careful choices are reflected not only in the decor, but in the food and atmosphere. Everything in this restaurant reinforces the idea of intimacy, from the family style dishes to the wood fired oven in the open kitchen. Their Mediterranean cuisine is perfect for an intimate dinner for two, or for an after work bite with coworkers after a hard day. This is definitely a place to fill your belly and ease your mind.

A Cote For Comfort

Having lived in Oakland’s Rockridge neighborhood for years, Jack and Daphne Knowles wanted to create a restaurant with a community feel. A Cote was the result, and it has been very successful—the restaurant has been in the Bay Area’s Top 100 Restaurants for three years in a row. The head chef, Matthew Colgan, studied part of his craft in Italy and was chosen as a Rising Star Chef by the San Francisco Chronicle. Thanks to his skill and the restaurant’s appeal, A Cote earned a three star review in 2001, its first year of business.

Upon arriving at the restaurant, my husband and I noticed the quiet. At six PM on a Tuesday, A Cote has a sense of calm, almost like letting one’s breath out in a sigh of relief. The main dining area was decorated with art deco style sculpture, clear holiday lights and teardrop shaped orange lamps on the wall. Soft jazz played at a light volume. The effect was relaxing, and the lights and music added to the coziness of the room. The wooden tables and seats were no doubt also chosen to minimize the distraction and the seats were surprisingly comfortable.

Towards the back of the main dining area, two intimate, backlit booths were available for seating. There were a number of tables joined together to seat one large party in the center of the dining area. Bar seating was available for customers as well.  Later, I explored further and discovered a beautiful enclosed area outside. Suspended heat lamps kept patrons warm and comfortable and more strings of clear lights added to the ambiance. One server explained to me that during rainy weather, the area was protected by tarps and the curtains were closed for added shelter. This seemed to be a perfect spot to cuddle and eat, as evidenced by the couple I saw sitting at one of the tables.

Once seated, the wood-fired oven in the open kitchen attracted my attention. Lydia Moret, our friendly hostess and manager, explained that it was used for cooking their signature mussels as well as for flatbreads and searing meats, such as quail and steak. Since the design was very similar to old fashioned pizza ovens, I imagined that its shape would affect the cooking process, and thus the flavor of the food. I was anxious to test my hypothesis.

Our waiter, Eric Nelson, was attentive and well informed about the menu, which changes weekly. Through my conversation with Eric, I learned that two out of the five servers working that day had taken sommelier classes; meaning that all of them were well acquainted with the wines on the wine list. The prices per glass range from $8 to $12, and bottles are $32-$80. Their selections focus mainly on Italian, French and Spanish wines, in keeping with their Mediterranean theme. I did see the occasional Norwegian and German wine, and some selections of “New World” wines featured California’s Napa Valley and Central Coast. Champagnes are also on the list, and again mostly Mediterranean in origin. A Cote features ales, IPAs and lagers from San Diego to Germany, they can be ordered on tap or in the bottle. Customers can also order cocktails such as La Garrigue, created with gin and elderflower water, as well as various hard liquors and spirits. For those who chose not to imbibe, there were non-alcoholic choices available, such as root beer, lemonade, and iced tea.

When we were ready to order, Eric told us about the restaurant’s two signature dishes: the previously mentioned Mussels and the Pommes Frites. I decided to order both, while my husband ordered the Lamb Crepinette and the Polenta. I also ordered a fromage plate as an appetizer. All of our dishes were small plates and served on plain white dinnerware, an excellent choice since the simplicity of the plates and bowls kept the focus on the food.

The first dish to arrive was the fromage, served on a small marble slab. With Eric’s help, I had chosen the Piave Vecchio cheese. It was accompanied by small slices of walnut levain, candied walnuts, blanched and toasted almonds, poached figs and slices of green apple. The cheese was similar to brie, but with much more flavor. It was cool, slightly tart and creamy. This went well with the walnut levain, still warm from being toasted. The candied walnuts had just the right amount of sugar on them to enhance the nutty flavor. Best of all, they had no bitter aftertaste, unlike other toasted walnuts I have had in the past. The poached figs had the same balance between sugar and natural flavor. The almonds were blissful in their simplicity, seasoned only with a little salt, and the green apple was balanced in its tart-sweet flavor. I combined the levain with the cheese and various combinations of the other toppings. Inevitably, I was more than happy with my choice. The combination of warm and cool, sweet and tangy was present in every bite. My husband and I were mildly disappointed when we ran out of bread, but another server was kind enough to bring more. I couldn’t help but think that if the fromage plate was this good, the dishes to come would be absolutely magnificent. A Cote did not let me down.

Next to arrive was the Pommes Frites, a pile of shoestring fries sprinkled with a light coating of salt and parsley. These came with a side of garlic infused aioli. The fries, although they looked ordinary, tasted extraordinary. They lacked the greasiness that is the plague of other fried foods, and dipped in the aioli, were absolutely delicious. The aioli itself had a very subtle garlic flavor to it. The pommes frites were positively habit forming. We knew we needed to save room for the rest of the food, but it was nearly impossible to stop eating them.

The arrival of our Polenta managed to divert our attention from the Pommes Frites. Served with a blue cheese aioli and sprinkled with a touch of sea salt, these golden brown, crispy-soft chunks were some of the finest polenta I had ever had. The dish lacked greasiness and was not heavy at all. I have a tendency to pile dip onto food, but the strong flavor of the aioli forced me to use small amounts. This actually worked in my favor, because I tasted more of the polenta as opposed to the dip.

Finally, our main dishes arrived. The mussels were so tender that they practically removed themselves from the shells. Indeed, some of them had fallen out of the shell and into the flavorful broth. Ah, the broth! I could taste the smokiness from the wood-fired oven, and the pernod and cream highlighted this. Fresh garlic and a touch of red pepper added a bit of a bite to the dish, but didn’t overpower it. The broth was so incredible that when the mussels were gone, I was hard pressed not to simply pick up the bowl and drink what was left. I was saved from violating the rules of etiquette by Eric, who appeared with half a baguette sliced into rounds.

Michael Cook, A Cote’s Sous Chef, pointed out to me that he and Chef Colgan often collaborated on many dishes. This included the charcuterie, Chef Colgan’s specialty. The latter’s skill was apparent when I tasted my husband’s Greek Lamb Crepinette. This was served on top of a lovely combination of eggplant and heirloom tomatoes, with the juices from all the components mingling in the bottom of the bowl and topped with a dollop of tzatziki. The crepinette had a beautiful brown crust on it and a thick meaty flavor. At first bite, one could tell that this was made from an excellent cut of meat; it was not gamy or strong in the least. My husband generously allowed me the first bite of the vegetables, pointing out my love for eggplant. The vegetable was grilled to fork tenderness, but the real surprise was that the eggplant lacked an overly chewy rind, a common problem with grilled vegetables. The heirloom tomato was firm and cool, and when both vegetables were combined with a bite of the crepinette, the tzatziki, and the juices, the flavor was outstanding. “Mmmmm!” was my enthusiastic response. My husband nodded in agreement, and I saw Eric smile as he turned to service another table.

The service itself was superb. No matter how busy the restaurant became, there was always a friendly server willing to refill a water glass or remove an empty plate. Every request was met with a smile and executed with speed and accuracy. The restaurant will be opening another branch in the Glenview district sometime in December 2009, with a Latin theme, and they are currently holding a contest to name the new venue. Regardless of what they choose to call it, I will be there to welcome it into the community. 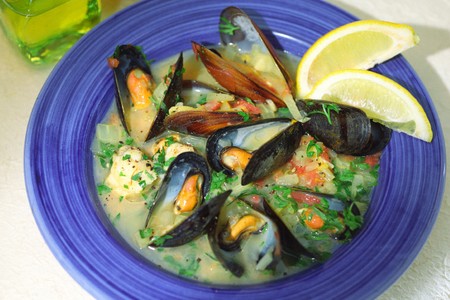 This is a sample menu. The menu is updated every Saturday.