Diego, the MGM Grand Hotel and Casino’s spirited Mexican restaurant, is a celebration of the cuisine, history, and, of course, tequilas of Southern Mexico. Between the exquisite regional menu of Executive Chef Noel Santos, the spirits provided by Tequila Master Julio Bernejo (the only American to boast the Mexican government-dictated title), and the afterhours dance party, ¡Vida!, Diego is a unique and exciting addition to the restaurant scene on the Strip.

The energy of the atmosphere in Diego is manifest in the vibrant mix of reds, pinks and magentas that dominate the interior of the restaurant. The vivid warm tones are accented by a contrasting lime green wall and a massive reproduction of Diego Rivera’s “Vendedora de Flores,” a piece that celebrates the rural origins of the cuisine. Video screens showing colorful digital art of traditional Mexican ingredients like avocados and agave flowers and collages of imported Mexican hammered-tin mirrors also honor the source of Diego’s inspiration. Created by award-winning designer Vicente Wolf, the décor is an expression of the colorful quality of Mexican culture and sets a wonderful stage for the equally colorful and authentic food.

One of Diego’s major enticements is Mr. Bernejo’s vast menu of 100% agave tequilas, some of which are not available elsewhere in the U.S. The list contains over 120 tequilas that represent more than 40 Mexican distilleries. A few of the unique selections are 3,4,5, an extremely rare spirit that sells here for $180 a shot, a pink-tinted tequila called The Rose, which gets its color and fruity taste from having been aged in a red wine barrel and Lapis, which has a mild copper taste from the copper still that it is produced in. Tasting flights are arranged by region, preparation or producer and range from $18 to $600. A long list of specialty margaritas offers a variety of creative, tasty concoctions. Among the signature drinks is the Frida Margarita, named for Mexican painter and wife of Diego Rivera Frida Kahlo. This strawberry and pineapple flavored drink is crisp and not overly sweet because the fruit is infused directly into the tequila. Garnished with fresh strawberries and pineapple, it is a bright and stimulating way to plunge into the evening.

The cuisine is just as bold as the décor, and pulls inspiration from areas like Oaxaca, Veracruz and the Yucatan. The Southern Mexican dishes are often deliciously complex, such as the Pollo al Horno con Mole which has over 30 ingredients in a sauce that takes 10 hours to create. Diego also serves outstanding versions of other traditional dishes such as Carne Asada and Cochinita Pibil, a slow-roasted pork dish. Overall, the cuisine should be appreciated for the amount of time and effort that goes into perfecting its subtleties and for the authenticity of these time-honored dishes.

Even the requisite chips and salsa is an opportunity to explore the flavors of Mexico. Upon seating, diners at Diego are served fresh house made tortilla chips with a trio of flavoring salts. The salts, which can be sprinkled over the chips to create dynamic varieties of flavors, feature tradition Mexican seasonings like epazote, cilantro, lime and guajillo, cascabel, and serrano chilies. The chips are also served with a selection of fresh, grilled or roasted salsas, such as the traditional salsa verde, pico de gallo and salsa roja. There are copious flavor combinations to sample with all these options, which is an entertaining way to pass the time before the food arrives.

The Guacamole de Lujo, a signature dish at Diego, is prepared tableside to order by the server. Avocados, cilantro, fresh lime and serrano chiles (measured to the level of heat desired) are chopped and blended to a creamy dip with impressive speed. The guacamole also contains sun dried tomatoes, a somewhat unconventional ingredient.  It is used to ensure that the taste of the guacamole stays consistent and balanced throughout the year, since the flavor of ripe tomatoes change with the seasons. Despite the blended texture of the guacamole, the flavors of all the separate ingredients stand out, activating different parts of the palate and making it a remarkably intricate representation of an otherwise simple dish.

As an appetizer, the Margarita Shrimp Cocktail is a refreshing way to start a meal. A salad of grilled shrimps, diced red onion, cilantro, tomato and mango are tossed in a golden tequila glaze and served over a scoop of creamy guacamole. The versatile sweet glaze subtly compliments the flavors of the shrimp, fruit and vegetables alike, creating a cohesive yet multifaceted dish. It is served festively atop a large blue glass bowl of ice. This cold salad is a sweet and crisp treat eaten on its own, but also tastes delicious as a topping for the chips.

The dish that is probably best known as an emblem of Mexican street cuisine is the Empanadas de Pollo. Three golden empanadas, filled with braised chicken, red chilies and roasted tomatoes, are served on an oval shaped dish on top of a dollop of guacamole and a generous pour of ancho tomatillo sauce. The shell is crisp on the outside and soft on the inside. The chicken is seasoned with cumin, which, combined with the smoky flavor of the ancho in the sauce, gives the dish an earthy flavor.

The Barbacoa de Chivo is one of the more rustic choices on the menu, and it is assuredly almost identical in taste to what you would be served in rural Mexico. This dish, which is traditionally pit-grilled, is braised barbeque goat meat that has been marinated in guajillo chilies. The juicy, flavorful meat comes to the table steaming in a red iron handled dish with onion and cilantro and served with slices of avocado and warm tortillas, which are made by hand daily by the industrious and skilled masa ladies in the kitchen.

Dining at Diego is like taking a multisensory journey through the Southern Mexican countryside. The bright, festive atmosphere is a great setting for parties large and small to indulge in the delicious regional cuisine and explore the gamut of that wonderful spirit, tequila. And the experience doesn’t need to end when the meal does – at night on Friday and Saturday, the tables are pushed aside or moved out and the restaurant is transformed into ¡Vida!, a salsa dance party and nightclub. Whether it’s a full feast or just tequila and dancing, Diego assures all the excitement and extravagance that a Las Vegas restaurant should. 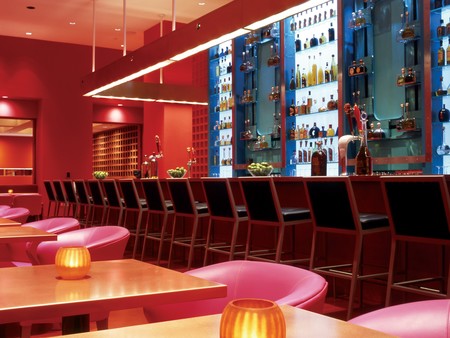 Does Diego have a happy hour?
Yes, happy hour is every Sunday through Thursday from 4pm until 5:30pm, available only in the Bar & Lounge area.
Does the restaurant have any private areas?
Yes, the restaurant has two private rooms that can accommodate 15 people max for each room or 30 people total if you combine both rooms. There is also a semi-private area that can accommodate up to 60 people.
Does Diego have a pre fixe menu for group dining?
Yes, in fact Diego offers 8 different pre fixe menus for large parties: 4 Family Style, 1 Plated, and 3 Reception menus, each set at different pre fixe prices.
Does the restaurant have live music?
On Friday and Saturday nights starting at 11:30pm the restaurant turns into a Latin dance club called Vida!. You must be at least 21 years old to enter.
Is this restaurant open for lunch?
No, Diego is only open for dinner 7 nights a week, beginning at 5:30pm.
what is the price for the reception menus?
Reception menus range from $40-$50/ per person.

Choose from the following: served with beans and ancho rice

Choose soft or crispy, served with beans and ancho rice, a cheese blend, lettuce and tomato

Sizzling platters with peppers and onions, served with a cheese blend, lettuce, beans and ancho rice

Served with beans and rice. Please add $2 for enchilada style