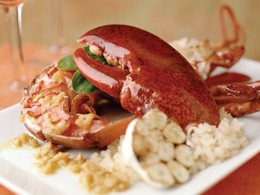 The highly detailed nature of traditional Mexican cuisine makes the kitchen at Diego the ideal workspace for Executive Chef Noel Santos, who takes a very hands-on and inquisitive approach to cooking.  He revels in the exploration of the intricacies of particular cuisines, recipes and even individual ingredients that he finds interesting, such as his recent fascination with cactus honey powder and black garlic.  His passion for his work stays fresh through this excitement for researching new ingredients and investigating the possibilities of using them in unconventional or unexpected ways.

A San Francisco native, Santos began his cooking career at the California Culinary Academy.  He graduated in 1996 and did an externship at the Oakland Marriot City Center.  During a life-changing visit to Las Vegas in 1999, he fell in love with the city and, specifically, the hotel scene, and decided to make it his home.  He started working at as a cook in Blackstone’s Steak House in the Monte Carlo, and then moved over to the MGM Grand where he quickly moved up the ranks from Junior Sous Chef at the Buffet, to Executive Sous Chef at the Mansion, and eventually to the position of Executive Chef at Diego, where he has been since 2006.

Though he admits to not having much experience with Mexican food before working at Diego, Santos eagerly delved right in and quickly grew to love how elaborate and involved many of the recipes are.   One of his goals as Executive Chef is to impart this newfound appreciation to guests of the restaurant and offer a new perspective on Mexican cooking.  He aims to introduce people to the more nuanced and unfamiliar elements of the unique regional cooking techniques and ingredients and to let people know that Mexican food is “not just about tacos and burritos” and is seasoned with a lot more than just cilantro and cumin.

The foundation of the menu at Diego is based on honoring the cuisine and cooking techniques of Southern Mexico, from urban street fare to rural traditional pit-fired family meals, and the preparation does not stray much from the classical techniques and indigenous ingredients.  The only real tinkering done with the dishes is in the presentation.  Santos explains that while he wants to stay true to the cuisine, he also has fun playing with interesting and modern ways of putting it on the table.  This is Vegas, after all.  He also thinks it is important to keep the dinner interactive.  Guacamole is prepared by the servers at the table, and flavoring salts and salsas are provided to allow the diner to participate in the flavoring of their dish, personalizing their meal with seasoning to their liking.

While there are many classic staples on the menu, Diego offers many possibilities for Santos to exercise his exploratory spirit.  He takes advantage of the bi-weekly specials to experiment with new recipes, many of which are so popular that they are added to the permanent menu.  One of these is the Kobe Beef Sliders, mini-burgers made with a Mexican twist, which are a new addition to the bar menu.  He says he is currently brainstorming new ways of interpreting the presentation of enchiladas, and with any luck they’ll make an appearance on the menu at Diego soon.