The sprawling, mega-chic MGM Grand resort in Las Vegas plays host to a plethora of fine dining choices, yet for an unforgettable and unique Cantonese/Shanghai cuisine experience, look no further than Pearl. Situated amongst most of MGM’s eateries in the “Studio Walk” area, Pearl fuses ultra-modern, sensual décor with tantalizing, exotic Asian dishes while simultaneously pampering its clientele with impeccable service and attention to detail. Executive chef Kai-Wa Yau is center stage at this hip, sexy dining spot, and his focus on creating artistic expressions with seafood, beef, and traditional Cantonese menu items is something that needs to be experienced to be fully appreciated.

A Bridge Between Contemporary and Traditional

In my long and illustrious history of eating Chinese food, I’ve found it’s darn near impossible to straddle the fence between traditional fare and modern flair. I have no idea why this is the case, but there is a distinction between quality, traditional Chinese gourmet and unique, upscale, décor. Actually, I should say this WAS the case. Pearl at The MGM Grand Hotel in the heart of The Strip has calmly and serenely taken decades of my carefully constructed pre-conceived notions and graciously dashed them to the floor.

My date and I walk in to Pearl kind of early. In fact, I’m not even sure they were done with their daily meetings. Although, that didn’t stop Chris (who I find out is the GM) from rushing up and graciously welcoming us to their establishment. The interior of Pearl is a veritable oasis from the chaos of the Vegas world behind us. At first glance, Pearl is not an enormous restaurant. I take a quick look and estimate around 25 medium sized tables. This would be a good place to entertain clients. Serene and hip, I am immediately drawn to the exquisite mixture of wood with a playful explosion of old world tiling. Along the far side of the restaurant there is a row of tall, open booths that somehow invoke a sense of privacy without blocking off the guest from enjoying the rest of Pearl’s beauty. Chris shows us to one of these statuesque booths and as we sit down my attention is caught by the indirect lighting that sets a peaceful and intimate mood.

We sit down and take a look at the drink menu. The date is feeling some wine, but I convince her that I’m going to impress her with some sake. Now, I’m no sake sommelier, but I know a thing or two. Or at least, I thought I did. I take one look at Pearl’s menu and realize I’m going to need help. I frantically give Chris the “come quick before I look like a total dunce” eyeball beckon, and he smilingly sidles right up to our table. I jokingly make mention of their extensive list and he laughs and tells us they take their wine and sake seriously, mentioning their Wine Spectator Award for the far-reaching list, and that he would be more than happy to point us in the right direction. We decide on a small bottle of nigori sake, which is slightly more creamy sake due to the fact that it is unfiltered. If you are unfamiliar with the world of sake, think of it in terms of beer. Usually sake is clear and bright, like a fine German Pilsner. Nigori sake is like that beer’s Bavarian cousin, the slightly thicker hefeweizen. If you are still lost in the mist, then just trust me; it’s good. Chris brings us a bottle of what translates as “Dreamy Clouds” and I am taken back by the fact that while it is creamy in color, it remains light on the palate and the nuanced fruitiness plays well against the smoothness of the rice.

At this point, we are greeted by Dennis, who is our go-to man for the evening. He is extremely friendly and super efficient. Dennis brings us something to nosh on while we decide on our menu options. I am pleasantly surprised to see an offering of mixed nuts rather than the mundane bread and butter. The menu showcases an arrangement of Chinese dishes from traditional entrees like Salt and Pepper Beef Tenderloin and Steamed Minced Pork with Salty Fish to live seafood and claypot creations. This is half the reason why the Pearl stands above other run-of-the-mill Chinese restaurants. Not only do they offer Chinese fare that rival others, but they unionize a modern aesthetic with its décor selection and presentation that is apparently missing in most of its competition.

After some brief discourse with Dennis as to which direction we should go, it is decided that the Chef’s tasting menu, an assortment of Executive Chef Kai Yau’s most prestigious dishes, is our best option for experiencing all that Pearl has to offer.

We start our dining experience with Minced Chicken with a Lettuce Petal. Paired with a hoisin sauce and watercress, the dish is a contradiction in taste. It is at once both crisp and soft. It is warm at the same time it is refreshingly cold. The chicken is juicy and tender and the sauce is subtle and understated, willingly playing the role of flavor expeditor rather than taste dictator. I immediately know that our decision for the tasting menu was the correct one. Once finished, Dennis brings us each a warm towel to clean our fingers off with (such a nice guy).

This is followed up with Spider Prawn Dumplings and Pan-Seared Pork dumplings. The pork has a coy spicy flavor to it, and is remarkably tender. The Spider Prawn Dumpling is surprisingly meaty and the sweet and sour accompaniment has a wonderful herbal note to it. My date sums it up perfectly when she says, “So this is what shrimp is supposed to taste like!”

Up next is Coconut Soup. It has a mixture of seafood and spinach in it, and is served in the actual coconut. The bountiful seafood mixture is an assortment of scallop, shrimp and crab. The soup broth itself is a masterpiece, light in texture and body, and slightly just salty enough to make the overall flavor pop. Chris comes by to check on us and I ask him if every soup comes served like this, or if we were just getting special attention because we were the first ones in the door. He assures us that every soup is prepared that way and when I ask him how many coconuts they go through in a given week, he laughs and says, “A lot!”

To finish off dinner, we are presented with Lobster in XO Sauce, Black Pepper Tenderloin of Beef, and the classic General Tso Chicken. There is a heaping bowl of vegetable fried rice to go with it all. The meats are all wok-fried. The beef is superb. Extremely tender, it has a ‘natural’ taste to it. The chicken is slightly sweet, tender and juicy. It has just a hint of spice to it, to make sure you remember it’s there. The lobster is what lobster should be- rich and buttery.  It also has that signature Pearl spice kick to it that enhances the complex tastes and nuances of each dish.

For dessert we are brought an assortment of selections from MGM’s in-house pastry chef. There is a mango puree with white mousse, a more traditional Chong-inspired dish, the White Monkey that’s a coconut/grapefruit concoction (sadly not served in another coconut), and the Dragon Kiss, a chocolate mousse/pudding. All four are wonderful, and my date and I forget any sort of decorum as we rush to consume as much of each dish as possible.

For a nightcap, I convince my date to try some filtered sake, and we settle on the Takasago Ginga Shizuku, which translates to “Divine Droplets”. This sake is also on the slightly fruity side, but has a more clean and bright finished than the nigori. I wax poetic about its virtues, and my date thinks the first one was better. I guess that’s why they make different ones.

As we’re finishing our sake, Chris comes by once more to chat with us. He tries to get us to try some of their Asian-inspired cocktails, and I am tempted. With flavor profiles leaning toward traditional flavors like guava, mango, and lychee, I plead with the date to try one or three, but she spurns my childlike excitement for all things Asian cocktail related. Oh well…stick to the sake, I guess. I ask Chris again about the extensive wine list and he tells me that what I have been looking at is only half. They have their own separate wine cellar just for the high rollers that come through. They also have a closed-off room to handle private events (or those same high-rollers that just want to be left alone!), and a semi-private room for large parties to enjoy an evening all together.

I ask Chris how they get their fish to stay fresh, being that they’re in the middle of the desert. He tells me they have all their seafood flown in live twice a week. He laughs at the incredulous look on my face and says, “Follow me!” He takes in to the kitchen, and sure enough, there are enormous fish tanks holding live lobster, shrimp, and all manner of fish awaiting their untimely death to be prepared for dinner.

We finish our brief tour and finally finish our sake. It seems like the entire staff stops what they are doing to bid us farewell and to thank us for coming in. I am in awe at the level of service, even as we are leaving. More importantly, my date is also impressed with the evening, and really…that’s the most important part, right?

Insider Tip: Book through LasVegasRestaurants.com and get their tasting menu for only $49.00 each. Save some serious dough and get some serious Chinese food in a relaxing and chic environment. 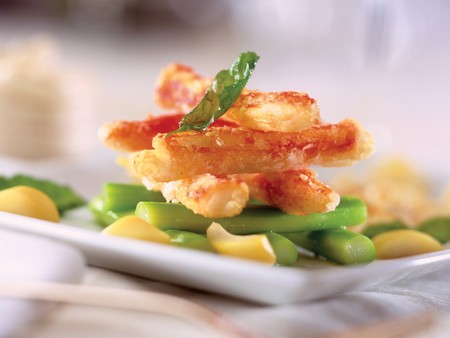 What cuisine does Pearl serve?
Pearl serves traditional Chinese cuisine.
Does your restaurant have a private room?
Yes, Pearl has two private rooms, one that seats 14-22 people, and another that seats 25-34 people.
What is the dress code for this restaurant?
The dress code is business casual.
Do you have a signature dish?
The Pearl menu has many wonderful dishes, but some favorites include the Spider Prawn Dumplings and the Fire-Roasted Mongolian Beef.
Do you sell gift cards?
Pearl does not sell gift cards however you can use an MGM Gift certificate at Pearl.
For 15 people do you charge a flat rate for the meal?
For parties of 15 guests or more, the restaurant would require your group to order off a prix fixe menu. The menus range from $55-$85/ per person depending on the menu your party would choose.