Set just one foot inside the Venetian's Pinot Brasserie and you'll feel transported to Paris. But if you're wowed by the adorable, authentic bistro setting, wait until you sample Executive Chef Eric Lhuillier's stunning French-inspired creations. Mouthwatering selections include Seared Sea Scallops with caramelized cippolini onions, vanilla, and watercress; and a Colorado Lamb Steak with parsnip puree and forest mushroom fricassee. Factor in the excellent wine selection and a bustling, casually elegant scene, and you may never want to leave this charming slice of France. 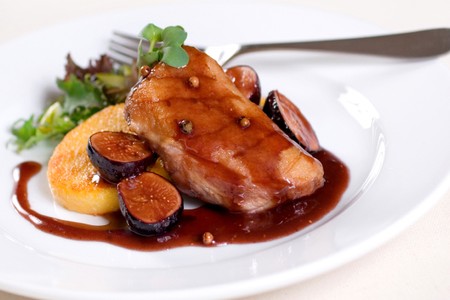 Wonderful! Our favorite place in Vegas!!

Had to respond to the terrible review this restaurant received from the other reviewer. This is our absolute fave in Vegas. Fantastic service. Lovely atmosphere. Outrageously good food. Will go again and again. We live here and are grateful for so many terrific restaurants here, but Pinot Brasserie is the best. Don't miss it.

We liked this restuarant very much. The Chateau Briaund was prepared perfectly. We started out meal with escargo that was prepared with a sauce that we had never had before and it was very good. We ended our meal with Creme Brule and it was prepared just how I like it with nothing added. I would recommend this restaurant to anyone looking for an excellent meal.

My wife and I made reservations to celebrate my 70th birthday here based on friend's recommendations and user reviews on other sites. We were extremely disappointed to say the least. The caesar salad came with one slice of parmesan, one lonely crouton and the dressing tasted like mayonnaise. When we complained to the waiter he said, "I know. We tell the chef all the time about the mayonnaisee dressing and he refuses to change." I ordered the mussles based on the garlic aroma coming from a nearby table where a patron was eating them. The muscles were in a non-garlicky cream sauce which was very bland. The garlic aroma was actually coming from garlic french fries at the other table. We also ordered the Chateaubriand for two which came with a tasty but very salty bordelaise sauce. The meat still had the silver memebrane attached which got gaught in my teeth which necessitated trying to pull it out with my fingers. For $80 you would think the chef would remove this membrane which is usually the first instruction in any recipe for pork or beef tenderloin. Half the meat was too tough to eat, the rest was OK. This was certainly no way to celebrate a big birthday. The arrogance of the chef is enough for me to say pass on this restaurant.

On 9/16/08 we were part of a group of 4 couples. We had a variety of entrees that varied from fair to poor, but the worst was a lamb dish that was almost inedible. when we told the waitress, she was indifferent:so while the ambiance gets good grades, food and service do not. Too many great restuarants in Vegas to waste an evening on medioctrety.

Terrible PASS THIS ONE UP

We were excited to have a "nicer" dinner while we were there in Vegas. We were extreemly disappointed to say the least. The noise level is absurd, I couldn't even hear my husband across the small two person table. Very cramped, I guess they tried to get as many people as possible in. When you are paying the kind of prices they ask for meals you expect it to be a pleasant experience. However, when we got there our server came over and told us the specials like a Dennys, we ordered a glass of wine which were both only filled half way up the glass but of course we paid full price. After they finally took our order, we were offered a meager hard roll from a plate that they distributed throughout the place, and 1 slice of butter, to share. When the food got to our table, it was not only cold but lousy. I ordered the seared scallops, I could cook better. They were rubbery, with no texture to them at all, the cippolini onions were slimy when you bit into them, my husbands dish was "marbled" they said however it was basically a hunk of stringy fat, with some sauce on it sitting on top of 4 pieces of asparagus, neither plate had any "decorations" or extra anything. Neither of us finished our dinners, went and saw a show went back to the hotel and had some snacks. We would not ever recommend this place, nor will we return.