Tucked into a quiet corner of a small (by Las Vegas standards) hotel/casino approximately 15 minutes east of the Vegas Strip resides an award-winning steakhouse. The Sonoma Cellar Steakhouse at the Sunset Station Hotel and Casino has built its ten-year reputation on menu offerings that continue to appeal to the fan of a hearty steak meal or seafood devotee. Add an extensive wine list topped by prompt, efficient and unobtrusive service, and you have the winner of the Las Vegas Review-Journal’s 2006 Best Local (or off-Strip) Steakhouse of the Year Award.

From the moment guests enter the dimly lit, dark wood and stone interior of the Sonoma Cellar, located deep within the Sunset Station Hotel and Casino, they are transported to a magical space reminiscent of a personal wine cellar, leaving any vestiges of casino noise and bright lights behind.

Flanking the center of the smallish room are tables coiffed with crisp, white linens and set just far enough apart to allow a nodding acquaintance between neighbors.  Encircling the room are upholstered booths that seat two to four, and occasionally five, comfortably.  These are perfect for romantic interludes, family celebrations, or business dinners.  However, the single diner will not feel awkward or lost when dining at Sonoma Cellar.  The attentive staff succeeds in making all feel welcome and well cared for.   A private dining room, which seats 20 comfortably, occupies a rear corner of the restaurant and is accessed through ten-foot-tall, intricately laced iron doors.  Longtime fans of Tony, who has been the bartender since the Sonoma Cellar opened ten years ago, stop by for a chat, a drink, and often an appetizer in the small lounge near the entry.

Though the Sonoma Cellar doesn’t have a child’s menu per se, Rose Pinocchio, the Sonoma Cellar Manager, indicated that families with children often dine at the restaurant.  If items from the appetizer or sides list do not interest a youngster, servers offer pizza, spaghetti, or chicken fingers from the nearby casino restaurants for their enjoyment.  This is an advantage of being surrounded by multiple dining options.

After I was delivered to my table by an attractive, personable hostess, my servers, Poom and Stephanie, welcomed me with a bread basket filled with a mixture of expected and unique offerings.  In addition to the sourdough and regular baguette offerings, Sonoma Cellar’s kitchen presented pretzel bread shaped like a fat finger, and a slice of dark raisin-pecan bread.

Based on Poom’s recommendations, I chose to start with the Bacon-Wrapped Shrimp appetizer followed by the Onion Soup Gratinee. Both turned out to be excellent choices.

Each of the four Bacon-Wrapped Shrimp was butterflied, and a sliver of Monterrey Jack cheese was inserted into the opening.  Wrapped in bacon and deep-fried, they were served with a tangy Honey Dijon sauce kissed with orange marmalade.  Paper-thin deep fried onion rings crowned this initial serving.

The Maui Onion Soup Gratinee conveyed a hint of sweetness provided by the onions without any salty harshness sometimes found in this dish.  The small bowl was perfectly sized and imminently satisfying.

Though enticed by the Chopped Salad on the menu, Sonoma Cellar’s best-selling salad option, I decided to move directly to the main course.  Again, Poom, my server, gave excellent advice.  Sonoma Cellar offers two grades of beef; Prime and Choice.  The Prime options are both wet- and dry-aged for enhanced tenderness and flavor, while the Choice options are only wet aged, though still excellent steaks.  Sensing my hesitation, Poom pointed out that she felt that diners could tell the difference between the two grades.

I ordered the Prime T-Bone, which almost completely covered my plate.  At Poom’s request that I cut into it to verify that it was cooked as ordered, I sampled my first bite of an immensely satisfying, perfectly grilled steak done medium to perfection.  Since the sides are presented on individual plates to permit sharing among diners, I spooned some of the Creamed Spinach alongside the steak and proceeded to thoroughly enjoy my dinner.

To accompany my meal, I chose a glass of 2006 Two Left Feet, a Shiraz-Merlot-Cabernet Sauvignon medley, from the South Australian Mollydooker Winery, for $10.  The winemakers, Sarah and Sparky Marquis, are both “mollydookers”—left-handed—hence the name of the winery and the humorous play on words in the name of their excellent red.  It caught my eye because it was one of two wines by the glass featured at the time and the write-up made for fascinating reading.  Though Mollydooker options are still available at the Sonoma Cellar, the current highlighted options include a 2004 Justin Isosceles from Paso Robles, CA at $28/glass.  The Justin Winery’s grapes were planted in 1779 by Franciscan missionaries, according to the accompanying information.  A 2003 glass of Cabernet Sauvignon, B.R. Cohn, Oliver Hill Estate, Sonoma Valley, CA merited a trial for $22/glass.  I learned that Bruce Cohn, the founder and proprietor, has a passion for Northern California wine country and music.  He is the manager for one of the premier rock and roll bands, the Doobie Brothers.

Finally, I had to call it an evening, regretfully expecting to end my dining experience at that point.  Poom suggested that I take a peek at the dessert cart, so that I would know about these offerings.   I am happy that I did, as my all-time favorite dessert, bread pudding, was offered that evening.  The Raisin Cinnamon Bread Pudding arrived promptly, a slightly warmed square of evenly balanced flavors accompanied by a scoop of vanilla ice cream and topped by a vanilla-rum-cinnamon sauce.

The dining experience was not yet complete, however.  Earlier I asked if I might meet the culinary master that was responsible for my enjoyable meal.  The manager, Rose Pinocchio, who had graciously answered many questions earlier in the evening returned promptly with Diana McGuire, the Room Chef of the Sonoma Cellar.   She modestly accepted my praise for an excellent meal and presented me with her wishes for happy holidays.

Added to my wish list, now, is a speedy return to the Sonoma Cellar for yet another splendid evening savoring additional menu options and enjoying the personal and professional care of capable and enlightened staff. 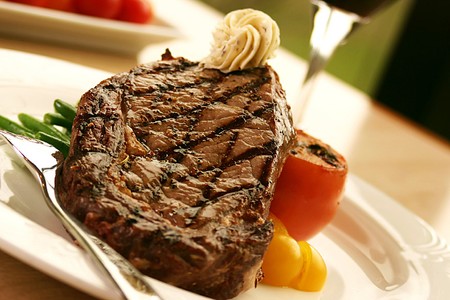 Are you open for lunch?
No.
Do you serve wine at your restaurant?
Yes.

Our USDA prime beef selections are aged for 28 days.