Studio B Show Kitchen Buffet at the M Resort

Studio B Show Kitchen Buffet at the M Resort

As my boss and I make our way out of Las Vegas, after spending four days reviewing buffets, we decide to wrap up the trip with a stop by The M Resort and Spa. On the drive into town, it is difficult to miss the billboards on which the M proclaims itself the best buffet in Las Vegas. Neither of us having made the trip to the M on previous visits to Vegas, we decide to see how the M stacks up against the big hitters we had dined at on the strip. After a 15-minute drive from our hotel on the Strip, we arrive at the M Resort. Being a Thursday morning around 9 a.m., we find ample parking in the lot in front of the ultra-modern hotel.

Entering the building, the accommodations at the M are beautiful. White marble slab walkways guide guests past large waterfall walls, glistening glass panels, and seemingly endless heights between floor and ceiling. The ceiling, lined with flowing and ornate light covers, throws off a warm glow. Large windows let in an abundance of natural light. The air is not full of cough inducing smoke. This is a pleasant reprise from the standard harsh lighting, tacky carpeting, and poor quality air inherent to most Vegas hotels.

The buffet, with its impressive capacity of 1062 people, is expansive. Like the lobby of the hotel, the buffet features natural lighting. A ceiling lined with artfully colored glass gives the dining area a warm glow of yellow tinged light. Covering the upper walls near the entrance are high definition flat screen monitors playing nature footage. The walls lining the dining area feature a repeating, three-dimensional split circle pattern in dark brown wood, against a sand colored wall. Dark, earth toned booths line the walls. Evenly spaced chrome and dark wood tables, and solid orange or mustard chairs, take up the majority of floor space. The textures and colors of the dining area are warm and inviting. We take our seats, and our server takes our drink orders. Both my boss and I order our standby breakfast beverages. For me, black coffee, and for my boss, decaffeinated tea.

Our waiter pours my coffee, which is a nice break from what I have become accustomed to at Vegas buffets, that is to say, a self-serve carafe. The coffee is hot and has a slight hint of spice. Perhaps chicory, but I am not entirely certain. It is a nice change of pace from the mostly standard restaurant quality coffee I have been partaking in all week. As previously mentioned, and as hinted to by the “Show Kitchen” moniker of the restaurant, the expansive buffet features live cooking at each of its stations. The few people dining this early at the buffet all seem to be in line for an omelet, so I decide to let the line die down a bit before I venture over for my standard “everything” omelet. This gives me the benefit of taking a tour of the buffet before filling my plate.

I notice that Studio B Buffet is the first place where I have seen turkey alternatives for bacon and sausage. The standard pork offerings are available as well, but for those looking for something lean, perhaps due to doctor’s orders; it is nice to see the turkey option. I try both the turkey sausage and turkey bacon on my first plate, and while it admittedly is not quite as tasty as the pork standards, the lean meat does have a pleasant, mild flavor. I also try the Eggs Florentine, which is well prepared, with a poached egg featuring a light, fluffy white and runny yolk and paprika sprinkled on top. The egg white frittata is light and fluffy, and features flavorful tomatoes, spinach, and onions. Corned beef hash is loaded with more beef than potatoes, again showing the quality of the dishes served.

For my next plate, I try the Eggs Benedict, which like the similar Eggs Florentine, has a light, fluffy poached egg, with a runny yolk and paprika on top. This may seem easily done, but to have an egg dish remain properly cooked, while waiting in a hot tray for diners to come serve themselves is no small feat. Cheese blintzes are fresh and almost too hot, with lava like risotto filling. An indicator of the quality of ingredients at Studio B is the macadamia nut French toast. Not only is the French toast good, but it features a healthy dose of large macadamia nuts, which as anybody who likes macadamia nuts knows, are very expensive.

As I leave the table to fill my final plate, the line at the omelet station has died down to a single patron, whose omelet nears completion as I arrive. The omelet bar is well stocked, and I am able to walk away with an omelet containing tomato, onion, spinach, mushroom, pickled jalapeño, bacon, sausage, and both cheddar and Monterey jack cheese. I also sample a large spoonful of hash browns, which are nice and crispy. Having sampled the macadamia nut French toast, I figure I might as well try the pancakes as well. The chocolate chip and blueberry pancakes, which are light and fluffy, are good buffet pancakes. They may not have the fresh off the griddle taste of homemade, but considering they came from a warming pan, the texture and taste is on par with many diner offerings I have enjoyed.

While my plate is full, I take a final walk around the buffet to see what I have missed due to my full stomach. I see the “Mexican” portion of the buffet not only has rice, beans, breakfast burritos, and huevos rancheros, but chile relleno as well. This is the first time I have seen this dish at a Vegas buffet. The pastry section is well stocked with muffins, croissants, Danishes, and other baked treats. A long line of fresh fruit is available, from halved grapefruits and various fruit cocktails, to melon melodies and pear halves. Granolas, yogurts, walnuts, almonds, and parfaits are present for those looking for lighter fare.

After I polish off my omelet and pancakes, I make my way to the dessert station. A large glass case with what looks like house made ice cream catches my attention. Wandering through the large dessert offerings, I see cakes, pies, tarts, and other delicious confections. As I attempt to catch the attention of the kitchen staffer who is working behind the dessert station, a manager type steps in to inform me that desserts are available during lunch and dinner, but not breakfast. This is another first, as every other buffet visited during our trip allowed diners to indulge in sweets during breakfast. While Studio B may be correct in the fact that I do not really need ice cream for breakfast, I am a little saddened by this lack of frozen treats. This is Vegas after all.

Upon accepting the fact that today will feature no breakfast ice cream, I return to our table to finish my coffee. This minor detail aside, both my boss and I are pleasantly surprised by the offerings of the Studio B Buffet at the M Resort & Spa. The price is reasonable, and when considering the vast array of options available, the buffet at the M is one of the best buffets in Vegas. The billboards that line the highway in and out of Sin City proclaim Studio B Buffet as the best in Vegas, and it is certainly part of the upper tier. After reviewing five buffets in Vegas, Studio B is near the top of the list, and should transportation not be an issue, is well worth the 10 to 15 minute drive outside of town. If you happen to drive by the M on the way in or out of Las Vegas, Studio B is a great place to either begin or end your stay in The Entertainment Capital of the World. 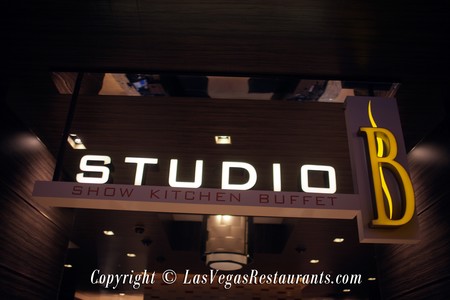 I bit pricey,but a wide array of selections. Always consistent with their quality. Everything is always fresh never lingering around. One large circular room,can get a bit noisy. Service is never far away!