Open since October 22, 2004, Sushi Roku has been seducing Las Vegas diners with its sexy food and cool, trendy décor for years. Sushi Roku is located in the Caesar’s Palace Forum Shops, boasting exquisite views of the Las Vegas Strip. Inside, the restaurant’s contemporary spin on classic Japanese features creates an environment that is comfortable, chic, and visually appealing. The inspired menu of sushi, sashimi, hot appetizers, noodles, and entrees is similarly inviting as it caters to many palates. Sushi enthusiasts appreciate Sushi Roku’s comprehensive selection of traditional rolls and more modern interpretations; diners interested in heartier fare enjoy prime cuts of steak, chicken, and seafood. Did we mention the truly staggering Sake List? A sake sampler with your meal is only a visit away.

Sushi Roku, located in the Forum Shops at Caesars Palace Hotel Casino, is an oasis in the desert of Las Vegas.  Roku is as appropriate for special prom night dates as it is for power lunches and upscale happy hours.  Excellence in a town full of restaurants known for their celebrity chefs (from Emeril to Bobby Flay, Tom Colicchio, Wolfgang Puck, Todd English, and Mario Batali) takes consistently good food, and exemplary service – Roku efficiently exhibits both without unnecessary glitz or fanfare.

Sushi Roku opened its Las Vegas location in 2004, but its history begins in California.  Roku’s first location in Hollywood opened in 1997, and remains the backbone for the group, which includes locations in Santa Monica, Pasadena, and Scottsdale.  The Corporate Executive Chef for Roku (as well as BOA Steakhouse) in Las Vegas is Jose Aleman; he has risen through the ranks, beginning his culinary journey as a dishwasher, while learning and growing via the Everest Room, and the Eiffel Tower at Paris before joining Roku and BOA in 2004.

The other ‘star’ of Roku is its General Manager, Kenji Tamida.  Neatly attired, and unfailingly friendly as well as professional, his name is fondly associated with tens of informal comments on a variety of websites attesting to the quality of Roku diners’ experiences.  He guides Sushi Roku much as an expert driver might control a Ferrari performance vehicle – deftly, and seemingly effortlessly.

Approaching Sushi Roku, there’s a podium with greeters in front of the restaurant.  The entrance is to the right.  Walking through a short corridor, a half wall affords diners some privacy from the entrance.  The pocket-sized bar that is further down the corridor is situated immediately to the left, and the kitchen is stage right across the dining room.  The bar has the requisite big screen television mounted on the wall, as well as earth-toned tapestries draped across the ceiling.  The bar and adjacent bar seating (with comfy leather stools) are softly lit, adorned with candles and bamboo plants in crystal decanters – it’s all very soothing.

In the dining room, the walls are decorated with bamboo sticks with lights at the top.  Iron artwork hangs from the ceiling around the muted chandeliers, and mirrored columns are covered with stone accents.  The wall colors are earth tones, from tan to deep umber, and large black Japanese characters are painted on the walls.  The carpeting is simple black.  Dodge Mitchell Design is responsible for the interior design, and they deserve the nod of respect for a project well executed.  Not unlike the bar, the impact is calm – this is not a kitschy restaurant with loud music, flashing neon signs and singing wait staff.  It’s relaxed, and designed to welcome diners to come, sit and enjoy.

Roku is an invitation to relax, and remain.  The table settings are very simple.  Each blond wood table is set with a teapot, a candle, a small soy sauce plate, and black placemats with linen napkins holding chopsticks.  In contrast, all menu items arrive on gleaming white plates.  We dined at Roku on a Friday evening with an early reservation.  It was very quiet when we arrived, but filled rather quickly.  Their busy time is later, about 8:30 and after, particularly when the shows let out.  Roku is approximately 7,000 square feet, but the tables can be rather close.  It’s a big place, and can be high-spirited when full.

Kenji, our new friend, walks us through the most popular menu items Roku serves.  Service for each table begins when the server delivers two ceramic bowls, one empty, and the other filled with warm edamame.  The edamame are tossed with sea salt, and are served whole.  They are frankly addictive.

Teased with the edamame, my palate is now tickled with the Pear Blossom cocktail and the Lychee Mojito.   Roku has a selection of more than 35 sakes: hot, cold, small, and large, by the glass or the bottle.  Their emphasis is clearly on sake and cocktails more than wine.  Their sake selection is impressive, and a source of obvious pride.

We begin our meal with the Japanese Yellowtail Sashimi with diced Chiles, and the Tuna Sashimi Carpaccio with Sesame Soy and Garlic Chips.  Each plate is garnished with shredded daikon radish salad.  The portions are generous, with approximately fifteen neatly sliced pieces of fish on each plate.  My husband (an admitted Ohio born fish-phobe) accompanies me to dinner, and intrepidly dives into the world of sushi.  His preference is the yellowtail sashimi.  It is mild, served warm, and the chiles add a fresh component to the dish.  In contrast, I love the tuna sashimi, served chilled – it’s more assertive, and the sesame soy and garlic chips make each bite pop with flavor.

The next starter to arrive is the Filet Mignon Wrapped Asparagus with Soy Mirin Sauce.  Very simple, this unpretentious dish is seared filet wrapped around asparagus spears.  The sauce gives it punch. It is savory, meaty, and topped with a tomato relish and parsley.

Next to arrive is Roku’s Chilean Seabass in Yuzu Butter.  The presentation is very understated – a piece of fish, on sauce, topped with tempura.  A complete knockout, it is sweet, and the fish is tender.  The sauce is complex, sweet, savory, and makes both of us want to lick the plate clean.  The seabass is garnished with tempura-battered shredded peppers.

Our final starter is Lobster Tempura with Miso Glaze.  The presentation is a blast of color.  The plate is blinding white, with a banana leaf lying on it.  On the banana leaf is the glazed tempura lobster.  On top is an empty lobster tail, and parsley.  It is an elegant presentation, and the taste has as much impact as the appearance.  As an aside, it is served as all tempura items should be and so few are – piping hot.  Anything served lukewarm would be an insult, and those at Sushi Roku know this. The tempura is fresh, hot, and gone in record time.  The miso glaze is sweet and succulent, and each taste is more seductive than the last.

Already quite full, our sushi arrives.  Our pleasant and obliging server, Jessica, brings us a platter with three sushi rolls: the Shrimp Tempura with Asparagus, the Baked Lobster with Creamy Miso Sauce, and the signature Katana Roll.

The shrimp tempura sushi is simple, tasty and well rounded.  It’s what I want from sushi, a complement of tastes and textures.  The sticky rice is nicely firm; the tempura is crunchy, with a creamy sweet shrimp inside; and the snap of asparagus tops it off.  It’s a great variety that is cleanly and sharply presented.  All three sushi rolls are presented on a banana leaf, and are garnished with the spicy sauce on one side, and wasabi and pickled ginger on the other.  The baked lobster roll is cooked, as was the shrimp, and it is served hot topped with the miso sauce.  It is a world of contrast from the traditional shrimp roll.  The lobster is warm, and topped with the sauce and baked until steamy hot.  It’s a very rich, creamy, hot, savory, and altogether decadent roll.

Roku’s Katana Roll (formerly known as the Nemo Roll), is a signature.  It is filled with spicy tuna and shrimp tempura, and topped with tuna and yellowtail.  Spicy sauce is served beside the roll.  It is as alluring to the eyes as it is to the tongue.  The ingredients taste fresh, the tempura is hot, and the sauce is piquant.

We complete our meal with desserts.  Roku’s desserts are included on the drink menu.  Kenji delivers two: The first is the Chocolate Volcano, which is a chocolate soufflé with strawberries and vanilla ice cream.  The soufflé is like smooth and silky velvet.  The plate looks like artwork.  Unlike the entrees, desserts arrive on contrasting whimsical plates that are clear in the center and colorfully bordered.  The soufflé is on a plate that is dusted with powdered sugar and drizzled with chocolate.  Sliced strawberries are beside the soufflé, and the dish is garnished with mint and a raspberry.  Finally, a crisp cookie (shaped like a banana slice) and vanilla ice cream complete the ensemble.

The second dessert is the Banana Flambé, and it is as different from the soufflé as the lobster is from the edamame.  It is served in a pastry ring, and covered with mixed berries and a scoop of vanilla ice cream.  The plate is dusted with powdered sugar and drizzled with a raspberry coulee, a sprig of mint, and a few berries.  The bananas are soft and creamy, and the berries add a tart contrast.  Each dish we taste feels complete; as though it has been practiced until it is just right every time.

The strength of Sushi Roku lies in the unparalleled commitment to service, as well as the quality and refinement of the menu.  It is as unpretentious as to be a standing ‘go to’ place for bachelorette parties, prom dates, and visitors to The Strip.  The food genuinely reflects the executive chef’s values, and the quality shows a rigid commitment to excellence.  Roku is a thriving restaurant, and is infinitely worth the trip and the cost.  It is a dining experience not to be missed.  I will certainly return. 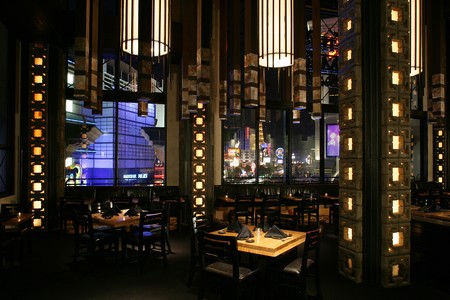 Where is Sushi Roku located?
Sushi Roku is located in Forum Shops at Caesars Palace.
Do you offer a discount for AAA members?
No

Available hand rolled or cut. Pricing is for cut rolls.