Within the bustling shopping Mecca known as the Forum Shops at Las Vegas’ Caesars Palace, an Old World steakhouse restaurant beckons tourists and eatery aficionados alike. The Palm traces its history back to an original New York City location; but amidst its various other locales in the US, the Caesars Las Vegas Palm boasts a hip, trendy energy unique on the “classic American steakhouse circuit.” Known for its prime aged steaks, jumbo Nova Scotia lobsters, and Italian heritage entrees, The Palm invites patrons to experience its warm hospitality, generous portions, and legendary celebrity customer base.

The Palm Does Old World Charm the Vegas Way

The dazzling city of Las Vegas is nothing if not flamboyant. The town has seen evolutionary change, coming full circle from its time as a gangster’s paradise to a family vacation getaway, and now to its current status of sultry adult playground. Included in this “club culture mystique” is Vegas’ reputation for housing some of the world’s most glamorous restaurants lorded over by celebrity chefs. One of the largest resorts on the famed Vegas Strip, Caesars Palace and its lavish Forum Shops retail promenade, plays host to the oldest family-owned white tablecloth restaurant to expand across the United States: The Palm.

The brainchild of Pio Bozzi and John Ganzi, The Palm saw its origins on New York City’s 2nd Avenue, where the original steakhouse eventually flourished to over 25 restaurants spanning North America from Boston to Los Angeles. Steeped in rich Italian heritage, the initial concept for The Palm was to feature specialties from the entrepreneurial team’s native Parma. According to Palm folklore, the name “Palm” originated when the proprietors obtained a business license; they wanted to call it “Parma,” but due to the men’s Italian accents, it translated into “Palm.”  Alas, steaks and seafood were not part of this initial concept, but became staple items that catered to its growing customer base of writers and artists.

Situated just feet from the entrance to the Forum Shops promenade at the Caesars Palace resort, the Las Vegas Palm exhibits Old World flair through its charming “outdoor” seating and rich interior surfaces. For 13 years, Las Vegas movers and shakers have been taking advantage of the restaurant’s distinct character and charm, which draws regular visits from Mayor Oscar Goodman and celebrity drop-ins by the likes of Andre Agassi, and others.

The Las Vegas Palm Restaurant boasts private and semi-private dining spaces, with three private dining rooms accommodating a group of 50, a group of 25-30, and a group of 15. The restaurant can combine the 50 and 30-person rooms to seat a maximum of 90 people, while the semi-private tables are available for smaller groups. The aforementioned “outdoor” seating area encompasses tables situated out in front of the restaurant in the midst of the elegance and grandeur of the Forum Shops crowd, for those who wish to see and be seen.

Each Palm location highlights the underlying interior design characteristic of walls covered with caricatures of local notables and national celebrities. This tradition started when John and Pio discovered they had no money for decorating the restaurant and, in a take on the old quip, “sing for your supper,” local newspapermen would draw a cartoon in exchange for a plate of spaghetti. Indeed, at the Las Vegas Palm, the caricature and signature-lined walls play in interesting contrast to the wood and glass construction elements.

I noticed a definite, overtly charming Old World steakhouse feel as soon as I walked past the Forum Shops seating and up to the main podium area. As we were lead to our booth by an appropriately professional staff, it was clear we were in for something quite special. Small intimate booths line the outer perimeter of the dining room and the bar, while traditional white cloth-covered tables make up the middle section of the restaurant. The private areas reside to the rear, and are complete with on-wall televisions. The solid hardwood floors also help to conjure the classic steakhouse ambiance. Glass and wood partitions separate the well-stocked bar from the dining areas, further fueling the sense of intimacy and classic steakhouse charm of The Palm; and throwback parlor-like ceiling fans and lighting fixtures complete the effect. It wasn’t long before the eatery’s floor noise level went from low to medium, as an interesting fusion of local regulars and Las Vegas tourists began taking advantage of the optimum dinner hour. The Palm at this Forum Shops location, from what I understand, is teeming with an overflow of customers on weekend evenings.

Although Las Vegas has steadily undergone a shift in restaurant dress code maintenance, The Palm’s clientele added to the “elegant yet casual” atmosphere of the restaurant through its appropriately chic apparel. This, coupled with the somewhat dim lighting, made for an upscale experience before even getting to anything on the menu. Adorning some of the walls are the accolades this Palm location has garnered including the Wine Spectator “Award of Excellence,” from 2006-2009; “Best Steak” by CitySearch.com, 2001; and “Best Steak Restaurant 2001,” and “Best Steak & Seafood 2000,” by the Southern Nevada Hotel Concierge Association. And when it comes to wines, The Palm’s by-the-glass and by-the-bottle selections of red and white vino are most impressive.

A plethora of selections awaits patrons of The Palm, with particular emphasis placed on favorites like the Jumbo Nova Scotia Lobster, prime aged steaks, and classic Italian offerings including Veal and Chicken Parmigiana – to say nothing of the appetizer and salad dishes. We began our meal with the Lobster Bisque soup, served in a bowl brimming with sweet, delicious, tender, and large pieces of lobster. The West Coast Gigi salad, recommended as a house specialty, is an adaptation of the East Coast Gigi, which includes shrimp, string beans, tomato, onion, and bacon tossed in vinaigrette. The West Coast variant tacks on iceberg lettuce, roasted pepper, egg, and avocado. The West Coast salad was delicious, unique and different. The avocado, crisp bacon, and huge bits of shrimp made it a true Palm original.

Moving on to appetizers, we sampled a specially prepared combination of the Shrimp Bruno and the Lump Crab Cake. The plump and tender shrimp were sautéed in a Dijon mustard sauce that also accompanied the finished product on the plate. Each bite provided a burst of sumptuous flavor. As we tasted the lump crab cake, it was fascinating to note that there was no filler used – delicious, buttery, whole pieces of crab simply flaked off the cake formation for eager consumption. The side of mango salsa joining the crab cake also exhibited a delightful tangy flavor, and paired nicely with the drizzling of Dijon mustard on the plate.

The real stars of the show, however, were the main entrees and their side dish companions. The Palm Las Vegas Executive Chef Kiko Ojeda prides himself on the quality of the Veal Martini dish, which comes wholeheartedly recommended by the staff. Tender medallions of veal are sautéed and topped with shallots, mushrooms, fresh and sundried tomatoes, white wine, marsala wine, and basil to create a parmigiana alternative that lives up to its reputation as a veal entrée that melts in your mouth.

Meanwhile, the 12-ounce New York Strip Steak, cooked brilliantly and topped with melted butter, was everything a premium cut of beef served by an Old World-style steakhouse restaurant should be – in a word, the prime aged meat was succulent. Befitting its status at such a dining establishment, The Palm’s menu offers an array of steak selections ranging from varying sizes of New York Strip to Filet Mignon, Rib Eye, and even Double Cut Lamb Rib Chops.

We also sampled three side dishes from the copious amount of choices on The Palm’s menu: the Creamed Spinach, Sautéed Wild Mushrooms, and Creamed Corn. The sides are served family-style, and it appeared two were more than enough for accompanying the main courses.

Although this was an intimidating amount of food to consume – aided by The Palm’s generous portion philosophy – we managed to end our evening with the sharing of a Seven-Layer Chocolate Cake that was simply unbelievable… for lack of a better term. First, the sheer size of the piece that arrived tableside suggested more of a “mini cake” than slice. Furthermore, the absolute decadence and richness of this cake makes it difficult to describe; but suffice to say, it is highly recommended if you have more than one person to share it with.

If you are visiting Las Vegas and seek a unique yet classic dining experience on the Strip, stroll into Caesars Palace’s Forum Shops and discover The Palm. Serving lunch and dinner daily, this charming eatery invites you to take an “al fresco” table amidst the energy of Vegas’ famed Forum Shops or inside the dining room for a more intimate afternoon or evening. 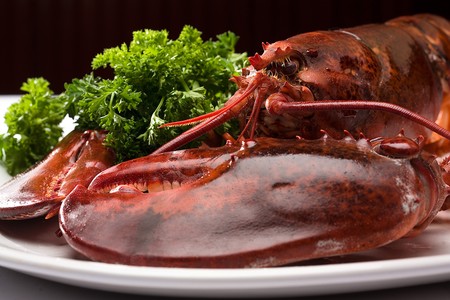 All sandwiches are served with French Fries

Served family-style for two or more

Palm Surf `n` Turf 0.00
add a half lobster to any order from our Steaks & Chops menu at half the whole lobster price
Jumbo Nova Scotia Lobster 0.00
three pounds and larger

One of our signature vegetable or potato sides, served family-style

Enlighten your sense and satiate your palette with these seasonal selections, exclusively prepared for you by our Executive Chef.