Sandwiched between a temple and a clothing store on West 3rd Street, A.O.C. Wine Bar doesn't look like much from the outside. Inside, however, there is a great deal to dazzle the wine and food lovers of Los Angeles. Born of the collaboration between Chef Suzanne Goin and Sommelier Caroline Styne, both of Lucques fame, A.O.C. offers a unique dining experience. With the aid of the distinctive cruvinet wine storage system, Styne can offer over fifty wines by the glass, half glass, and carafe. Diners can sample from this list while trying some of Goin's small plates, which vary from traditional wine bar accompaniments, like pate, to the more playful fried chicken.

If you look carefully, you will find A.O.C. Wine Bar somewhat inauspiciously sandwiched between a temple and a clothing store on West 3rd Street in Los Angeles. From the austere exterior, marked solely by small black lettering indicating the address number and the initials of the restaurant’s name, you might not guess what hides inside. The only other distinctive features of the exterior are the tall, rectangular windows along the front façade of the restaurant that, while set back from the sidewalk, still emit a tell-tale glow to indicate that you’ve arrived.

The inside of the restaurant, too, is austere—a minimalistic design centered around the contrast between the vertical lines of the windows and the horizontal lines of the bars as well as the harmony between the dark wood of the bars and tables, the tan of the leather seats, and the white walls. There are no unnecessary adornments, few pictures on the walls, or flowers on the tables, nothing, in short, to distract from the main points: the wine and food you consume and, if you’re lucky, the company you keep. The focus on these elements results from the fruitful collaboration between James Beard Award winning chef Suzanne Goin and talented sommelier Caroline Styne, who were partners in the creation of the wildly successful Lucques long before opening A.O.C. in 2002. The name, by the way, stands for Appellation d’Origine Controlee, the seal granted to certain French products to certify their place of origin, which is an important quality control in France.

On my first trip to A.O.C., I was afraid that there wouldn’t be room to sit at either the regular bar or the charcuterie bar, so I made a reservation and sat at a table for two with a friend of mine who had gamely agreed to accompany me. When we arrived, sometime around 7:15, there was indeed room at both of the bars as well as at most of the tables. Still, my fears turned out to be well-grounded. As the night went on more and more people filed in and very soon a happy, if also loud, buzz filled the room. That was by 8:00 on a Thursday night.

During prime hours and on weekends, A.O.C. is not the ideal destination for a private, quiet dinner. Our table for two was less than a foot away from that of our neighbors and we were somewhat unwillingly eavesdropping on their conversation all night. The bars, too, are tight quarters where you may find yourself seated between other guests as diverse as early-thirties L.A. hipsters or a couple in their sixties in search of some great wine. Perhaps because of everyone’s close proximity, the atmosphere on these occasions is lively and congenial. I found that you can have a very different experience if you go early or late in the evening, and on calmer nights early in the week. When I came on a Monday night at 9:00, there was plenty of room at either the wine bar or the charcuterie bar, jazz music could be heard above a low din of conversation and the atmosphere was relaxed. Though it was closed when I visited, A.O.C. also has an upstairs dining room and outdoor patio that is open on busy nights when the weather permits.

Regardless of the level of business, all diners at A.O.C. are given a warm greeting: thick slices of country bread and a dish of whole olives nestled right next to a rustic olive paste bursting with flavors of garlic, smoked paprika and cumin. On every occasion, I found the servers and bartenders to be knowledgeable and friendly; in one instance the bartender helped my brother, who was unsure about which wine to order, by pouring a few samples for him to try and then pouring another based on his preferences in the first trial. He finally settled on a light, fruity Rioja, one of the cheapest wines on the list.

At A.O.C., this kind of help is almost a necessity, as patrons can choose from a frequently changing list of over fifty wines by the glass, half-glass, and carafe. This kind of selection is made possible, in part, by the cruvinet wine storage system proudly displayed behind the bar. The cruvinet allows bartenders to pour wines by the glass from taps, keeps both whites and reds at the proper storage temperature and, most importantly, defends the open wines from oxidation by filling empty bottle space with inert gas. The half-glass option makes it easy to try some of the lesser known wines that Sommelier Caroline Styne offers. A Los Angeles wine enthusiast, for example, may be interested to try the wines of Topanga Vineyards, located right in our backyard, even if the grapes come from up North. During my visits, A.O.C. was also offering both a pinot noir flight and a sparkling wine flight. As a whole, the wine list is heavy on wines from France and the United States with a good amount of Spain and Italy thrown in, and the occasional jaunt into Germany, Austria and, Argentina.

Accompanying the wine selection is a similarly balanced menu of Suzanne Goin’s mostly Mediterranean dishes, again with some American twists thrown in, like her sweet-tea-brined take on classic Southern fried chicken, or pork belly with southwestern touches of tomatillos and corn salsa. The menu is composed entirely of small plates organized as charcuterie, salads, fish, meat, and items from A.O.C.’s wood-burning grill.

Among the charcuterie options, the meltingly tender pork rillettes stood out. Placed on a little wooden board beside a garnish of spicy frisee and a few cornichons, the rilletes were served as a generous slice out of a terrine, and crowned with rounds of tangy, bright-pink pickled onions and two slices of toasted bread. Along with a nice glass of red wine, this dish would even be enough for one person to have a great small supper at the bar.

Most of the other dishes would not be large enough to stand alone as a meal, but the idea is to order a few anyway and then share. From the wood-burning oven, we tried the clams, which came crowded into a small, cast-iron dish and topped, again, with two slices of crispy bread. Though the clams themselves were tender and flavorful, their cooking liquid was the star of the show. As advertised on the menu, it was deeply flavored with garlic and sherry, but was also finished with a touch of cream that made it heartier.

We were also happy with our choice from the meat section of the menu- two skewers threaded with chunks of well-seasoned, medium-rare lamb served with ratatouille that was delightfully unlike the fancy, cylinder- shaped one of movie fame (if you’ve seen it). Goin’s is simply cut into rustic little chunks, cooked with tomatoes until tender and spooned onto the plate to form a lumpy bed for the lamb.

Of all the dishes tasted, the Gnocchi with lobster and truffle butter was least successful, perhaps because it advertised so much. The gnocchi were springy, rather than tender and yielding as I’d hoped they would be, while the flavor of truffles was undetectable in a buttery sauce that seemed not to adhere to the pasta as it should.

On my late Monday evening venture, I came in with my brother to have some dessert. He ordered two cheeses and the optional accompaniments but was a bit mystified as to how to eat them. The accompaniments, a dizzying array of slivers of date bars, quince paste, lemon bars, golden raisins and crunchy marcona almonds, among other things, lay like so many puzzle pieces on the plate without any real unity, while his two cheeses arrived looking lonely and washed out on a big, white plate. When he figured out what was what, he loved it; we simply wondered why they weren’t put together.

My sweet tooth led me to the Walnut Galette, a triangular slice of tart that induced memories of Southern pecan pie and was accompanied by a refreshingly tart dollop of crème fraîche and a quenelle of plum-colored black fig ice cream. Those who prefer to drink their dessert can also try one of the various ports and madeiras that are offered. If you have the money, A.O.C. even offers Chateau d’Yquem Sauternes, but you have to buy the whole bottle.

While many locations claim the name, a true wine bar is hard to find. Not only is it rare in this city to find a large selection of wines available by the half glass, glass and carafe, but it is also rare to find a place with food just rustic enough to make you feel at home while maintaining enough finesse to impress your palate. A.O.C. does all of these things, but more importantly, it provides an environment in which to relax, to drink some great wine and to talk about it with friends, or with the knowledgeable staff. To me, creating that kind of space is what a wine bar should be all about. 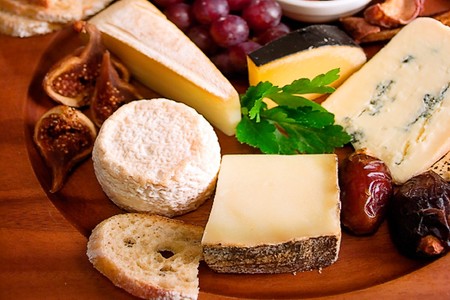 Do you take reservations by email?
No
Who is your Executive Chef?
Suzanne Goin

Cheese can be ordered alone or with other cheeses, two for $10.00, three for $15.00 and so on. You can also order "accompaniments" for $4.00, which includes, among other things, date bars, lemon bars, marcona almonds and golden raisins.

Gnocchi with lobster, pancetta and truffle butter 17.00
Halibut with bacon, sorrel and gribiche 15.00

From the woodburning oven

Clams with garlic and amontillado sherry 15.00
Brioche with prosciutto, gruyère and egg 14.00
Arroz Negro with squid and saffron aïoli 14.00