Modern Angelenos are frequently fixated on the trendiest restaurants, where women wear the shortest skirts and lowest tops; the design includes plenty of smooth-coat stucco and mismatched items tacked to the walls; and the decibel level is loud enough to drown out a jet engine. Cicada is the exact opposite, a grand Art Deco restaurant in downtown’s historic core that truly befits a special occasion. Thankfully, the food doesn’t evoke a bygone era, and the restaurant delivers an L.A. rarity: a total dining experience.

Stephanie Haymes and Adelmo Zarif relocated Cicada from West Hollywood in May 1997. Haymes named the restaurant for a bug that’s considered lucky in France, appearing every 17 years to provide a feast for the animals. The cicada also happens to form the shape of a meaningful diamond broach that belonged to Haymes’s grandmother. Zarif became Cicada’s sole owner in 2002. The original Cicada touted fine French cuisine; however, under Executive Chef Suzay Cha, the restaurant has evolved into a modern northern Italian restaurant with Asian accents.

Cicada is located downtown, a short walk from Pershing Square and the Central Library in the Oviatt Building. The entrance to the restaurant is grand, with street-front screens featuring intricate metal work, including women with flowing hair riding dogs. Strange but true. Guests walk under a low ceiling into the foyer, which hosts marble flooring and a ceiling with clusters of backlit Art Deco glass triangles. The glass double doors are magnificent, designed by Rene Lalique, with Art Deco sunbursts and eagles.

The low-lit, two-story dining room is just as staggering. The grand room with the towering ceiling centers on a magnificent chandelier that dangles over a tabletop centerpiece with enough fresh flowers to single-handedly keep a florist in business. Towering mahogany support pillars from Paris are each ingrained with twin Art Deco angels. There’s a gold ceiling and drapes, plus black and gold zig-zag accents. Clusters of drop-down yellow Art Deco lanterns are shaped like inverted flower bulbs. The wood walls host a wealth of sliding, fully-stocked wine cabinets. A grand staircase leads past a landing with a colorful painting of a Jazz Age woman to a glass-lined balcony with wraparound tables that offer views of the diners below.

During the week, businesspeople and tourists frequent the restaurant. Diners regularly celebrate birthdays and anniversaries, and aspiring grooms have been known to propose. Saturdays are popular for weddings and special events. On Sunday nights in the second-story bar, Cicada Club, diners (and flappers) arrive wearing vintage clothing to dance to music from the ‘20s, ‘30s and ‘40s. They even make drinks with the notorious liqueur absinthe. During the day, Cicada is used for film and television shoots, including retro AMC show “Mad Men.”

On Thursday nights, which was when we visited, singer Max Fontaine performs in a black suit and tie, on a small stage near the staircase. With a red drape backdrop, he crooned vintage lounge songs like “That’s Amore” and “The Way You Look Tonight.”

When it came time to order, we submitted to Chef Cha, ordering the tasting menu. She started us with her summery Crab Salad. Tart pink grapefruit segments were tossed with sweet lump crab meat, thin-shaved crescents of celery, microgreens, and light shower of tangy lemon vinaigrette.

There is currently no in-house sommelier, but Chef Cha was willing to recommend wine pairings. Cicada earned a 2007 Wine Spectator Best of Award of Excellence, so she clearly had a serious list at her disposal. With our first course, Chef Cha paired the salad with a Sauvignon Blanc from Honig Vineyards in Sonoma, cool and clean tasting.

The first two dishes were plucked from the regular menu, but the third course was special: three slices of luscious, crisp-skinned duck breast with a crispy fried apple segment, fried apple whisps, red wine reduction, and mâche. The duck partnered nicely with a neutral 2005 Pinot Grigio from Lagaria, Italy.

Chicken Tortellini was a colorful signature dish featuring three rectangular tortellini with thin wonton-like skins. The pasta packets were blanketed with a lighter-than-expected Mascarpone cream sauce. The plate was strewn with diced scallions, radicchio, spinach, and whole pink peppercorns for spice. The only quibble: the tortellini’s minced chicken filling could have been juicier. A bold 2006 Pinot Noir from Francis Coppola’s “Diamond Series” complemented the dish.

Chef Cha’s most traditional dish of the evening was the Pappardelle with Filet Mignon Traditional Bolognese Sauce. Inch-wide pasta sheets hosted a rich, burgundy ragu made using a generous portion of filet mignon. The dish was solid, but would have benefited from a fattier cut of beef. A topping of basil leaves lent the dish color and fragrance.

The showstopper was a special of Blue Nose Bass with a sauce of orange tobiko (flying fish roe), green masago (Icelandic smelt roe) and lentils. The flaky char-grilled fish fillet was surrounded by five crosses of al dente green beans.

Pastry Chef Jorge Flores works with Chef Cha on a menu of seemingly traditional desserts. Banana Upside Down Cake was multi-faceted. The roof of the cylindrical cake was lined with caramelized bits of banana and topped with dollop of chantilly cream. The rest of the white plate featured a scoop of rich banana ice cream and a six-inch peanut butter stick rolled in finely chopped chocolate and crumbs. The plate was strewn with peanut butter crumbs and dark chocolate crumbs. The cake itself could have been moister, but the presentation was impressive, and each part of the plate offered a new discovery.

We also ordered a Selection of Homemade Gelatos and Sorbets. A classic martini glass held scoops of sweetened milk and basil ice cream, each distinctive and fortified with plenty of egg yolks. The scoops supported a mint leaf and a dark chocolate tuile.

Before you leave the Oviatt Building, make sure to visit James Oviatt’s 13th Floor penthouse, which is an incredible Art Deco time capsule. When the building was constructed in 1927, it was the second tallest structure downtown. Now the rooftop patio offers views of taller (and tackier) buildings.

Overall, Chef Cha’s cooking was more contemporary and flavorful than was necessary given the distractingly beautiful setting. Prices were noticeably high, but Cicada isn’t just a restaurant. It’s a history lesson. 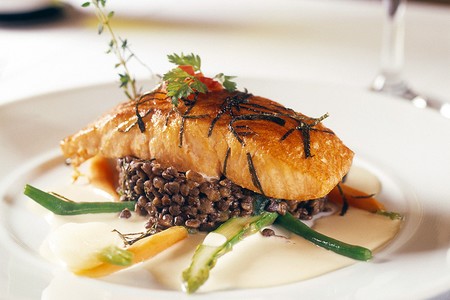 What is the penthouse?
Once the residence of the building's owner, the penthouse features Jazz Age architecture and, along with the outdoor terrace, can be rented out for private parties
Does your menu change?
Yes, the Cicada menu changes twice a year to highlight seasonal products. Though, some menu favorites are offered year-round.
Can we dance and the restaurant?
Yes, on Sundays. Every Sunday evening is Maxwell DeMille's Cicada Club where you can enjoy dinner and dancing on two floors to the finest vintage dance orchestras and dance bands. Making a dinner reservation will guarantee your table for the entire evening. Vintage or evening attire is encouraged.
What type of Italian cuisine does Cicada specialize in?
Cicada’s menu is made up of Northern Italian cuisine.
Does Cicada have quiet tables for business meetings?
Yes, requests for quieter sections of the restaurant can be requested with a reservations.