Seeming light years away from the hustle and bustle of the collegiate/tourist-filled South State Street is an unsuspecting Cal-French local favorite: Downey’s. For 25 years, Owner and Chef John Downey has managed to sustain rave accolades amidst a completely unlikely environment. Yes, the esteemed apex of Santa Barbara restaurant folklore is all but hidden in secluded Mid-Town State Street. More surprising is that once inside, Downey’s is completely void of aesthetic trickery to the point of intrigue. It is evident: John Downey is from the school of substance over style.

Before I visited Santa Barbara’s Downey’s Restaurant, I suppose I had come to expect a healthy dose of pretension from the place. After all, it was an elusive, namesake restaurant, whose owner and chef hailed from Mother England, and it had received accolades and critical praise from locals.  I was surprised, however, to find that John Downey, the restaurant’s chef and proprietor, upholds the old adage of substance over style.

The façade would have amounted to nothing more than a window browse had I not spotted the numerical address: 1305 State Street. I did eventually locate the sign, hanging in obscurity, but to characterize the entrance to Downey’s as making a statement would be a misnomer. I must say, I found it heartwarming that a place of such acclaim didn’t rely on an ounce of aesthetic trickery to stay afloat.

Upon entering the foyer, I found myself in unfamiliar territory, unsure of the Chez Downey Point of view. The walls were a soft shade of gray, tablecloths were classic white and there was an elegant flower arrangement to greet us. Seconds later, I was distracted by an eclectic (okay…peculiar), brightly colored Indian sheath and a single quaint, woodsy booth with lively curtains nestled in the very back of the restaurant. While certainly out of place, I found it charming and slightly wished I could have snagged the secret table. Although the décor choices were puzzling for my own taste, Downey’s atmosphere was very pleasant, soft and conducive to a relaxing evening.

We were warmly greeted at 6:00 PM on a Sunday night by our host and were promptly seated. We decided on a window-side table, one of only two tables with a view of State Street. We sat amongst a few forty-something couples whom I overheard allude to the fact that they were regulars. The rectangular (lengthwise) room made good use of its space, placing four-top and two-top tables with generous room. In the same vein as the woodsy booth, landscape paintings adorned the walls, courtesy of Mrs. Liz Downey, the wife of John Downey and manager of the restaurant. They came in all shapes and sizes and randomly formed a semblance of wall art. Some were even framed in Native American designs. As I peered at the walls I noticed a few visible holes where paintings once hung, a slightly disturbing detail that seemed unbefitting a restaurant of gourmet caliber. Just next to this were Roman-like freestanding columns supporting weathered Fern plants.

I didn’t have much time to harp on the parched Ferns because our superstar waiter Dallas arrived. In fact, all of the staff was personable and gracious. One of John Downey’s strengths seemed to be his impeccable choice of servers.  Dallas was what we in Los Angeles would have assumed to be an actor-in-waiting, working in a restaurant while hoping to be the next Ashton Kutcher. My assumption was dead wrong. Dallas was astute, witty and just happened to recommend two of the most superb bottles of red wine we ever had. He also had mastered the delicate art of being attentive yet removing himself at just the right moments so as to enhance our private experience.

We looked over the menu, and decided to let Dallas guide us through what the Chef considered his edible treasures.  We began with Dallas’s two “quintessential” Downey’s appetizers of the night. He explained that Downey’s Prosciutto with Bosc Pears, Arugula & Roasted Walnuts was special because the prosciutto was cut from the tenderloin and achieved an incredible balance of salty and sweet. Not having been exposed to the various means of obtaining crude ham, I took his word for it. Upon inspection, the prosciutto was cut into generous, deli-sliced medallions that were an almost transparent, faint, tan-yellowish, encased in a pepper crust. Admittedly, the prosciutto was the first of its kind that I had ever seen. It complimented the sweet, grainy pear spears, crunchy walnut pieces and fresh, leafy arugula. We also ordered the Santa Rosa Island Crab Toasts with Avocado, Orange & Roasted Red Pepper Salad.  Heaping tablespoons of finely shredded crab sat atop Melba-like toasts and were accompanied by ripe chunks of avocado, sweet orange and crunchy red bell pepper. In both appetizers, the produce was noticeably delicious and fresh.

One of the most interesting things about Downey’s is the permeating sense of “no frills.” Like the unaffected exterior design, the presentation was very straightforward—no designs, no garnishes. From beginning to end, there was an unsurprising lack of plate art.

We proceeded with two courses from the second portion of the menu. My companion and I both chose salads because we loved the fact that John Downey not only changed his menu daily (indicating that he put a premium on freshness and creativity) but also because he obtained his produce from local resources. I chose the Tom Shepard’s Greens with Choice of Two Dressings and opted for the Garlic Dressing. My date decided on the Watercress, Spinach & Belgian Endive Salad with Local Strawberries & Roasted Hazelnuts.  The salads would ultimately be remembered as the highlight of our evening. The simplicity of the salads allowed us to taste every green and enjoy the house-made dressing without feeling like it was a soup poured over tasteless lettuce. The local strawberries (like all the produce used at Downey’s) were perfectly ripe and sweet.

Because our service was stellar throughout the entire evening, I am happy to report that our food arrived in perfect intervals so as to allow us to savor the dining experience without feeling the torturous interlude between courses that so often accompanies a “hot” restaurant. The dinner menu displayed a lovely variety of entrees including New Zealand Venison Loin, Lamb, and various seafood options. Because I believe fish is difficult to prepare well, I chose the Local Lobster & Monchong Ragout with Shiitakes, Flageolets, Tomatoes, Leeks & Bacon. My date ordered the Boneless Veal Chop with Mustard-Chives Sauce, Artichoke Hearts & Mushrooms. Both were light, aromatic and filled with decipherable ingredients. I chose Monchong because I am a fan of flakey, tender fish; however, due to the preparation (submerged in the ragout) the fish tasted boiled and was not flakey in the least. While the Veal Chop upheld John Downey’s sense of fresh simplicity, the meat itself was tough, and my date was hard-pressed to find a few bites free of gristle. It is also worth mentioning that the bread came out just before our entrees. While I have come to expect bread at the beginning of my meal, I was inadvertently grateful I didn’t fill up on the warm, home style, traditional white and soda bread baked daily in the restaurant.

As we concluded our meal, I took a tally of all things Downey’s. The service is top-notch, the atmosphere pleasant and relaxing. The “Du Jour,” approach, and daily menu incorporates the creative jewels of each season. Also of great significance is John Downey’s unwillingness to hide behind salt, cream or over-spicing. Nothing from the inside out is camouflaged.  Downey’s caters to the couple or single that doesn’t equate romance with idyllic embellishments or a fairy-tale milieu. The restaurant is for those who value a welcoming environment and top-notch service. It is a place for the person who craves a familiar feel but also a spontaneous miscellany of dining options. 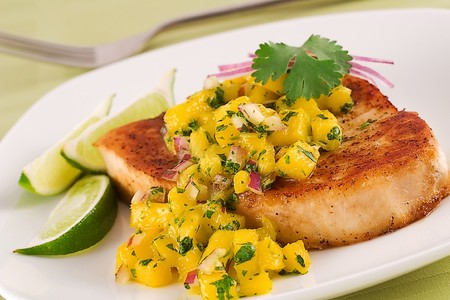