Situated in the heart of Santa Barbara’s downtown scene, Holdren’s provides diners classically prepared steaks as well as seafood with a distinctively Californian flair. The patio offers views of this resort town’s palm-lined streets and upscale shops, while indoors the brick walls and leather booths bestow a charm akin to the traditional steakhouses of Chicago or New York. Though in business a mere four years, Holdren’s boasts the oldest bar in Santa Barbara, so it comes as no surprise that the martini list contains an array of unique specials and the extensive wine list is suitably matched to the hearty cuisine.

Holdren's Combines the Best of Both Coasts

A noisy, dimly lit steakhouse may seem out of place in the lackadaisical wonderland that is Santa Barbara, which is perhaps better-suited to beachside cafes and trendy new hotspots. However, right in the middle of State Street—the idyllic main drag lined with palm trees—nestled among high-end clothing stores and countless eateries serving lighter California fare is a classic steakhouse: Holdren’s Steaks & Seafood.

Holdren’s has captured a place in the hearts of both locals and visitors with its ability to seamlessly fuse traditional and modern elements. Thanks to owner Clay Holdren and executive chef Juan Velazquez, both the menu and the ambiance playfully waver between enduring sophistication and modern stylishness.

Clay Holdren, who was born and raised in Santa Barbara, worked his way through many of the local restaurants, starting by washing dishes at age 14. Four years ago, he secured a downtown edifice on a prime block of State Street, hoping to realize his dream of opening an old time steakhouse, and Holdren’s was born.

As we entered the restaurant, the musical styling of Miles Davis bounced off the brick walls, mingling with the boisterous conversation of the diners. Although the patio imparts lush vistas of the seaside town and fabulous people-watching possibilities, the interior of the restaurant is characterized by a classic steakhouse atmosphere. Rather than the minimalist or modern décor that is typical of many new restaurants in this town, the large light fixtures, rich wood furniture, and artwork inspired by the jazz era and Old Town Santa Barbara give the place a sense of timelessness. In the semi-enclosed private room known as the “Red Room,” one could easily picture a gaggle of Mafiosos gathering there regularly, swigging Chianti and chomping on Porterhouse steaks.

This particular occasion was decidedly more intimate, and we were led to a towering booth, which served nicely to isolate us from the surrounding clamor. The immense leather booth, bathed in faint candlelight, immediately transported us to another place and time more reminiscent of an East Coast eatery than a beach town bistro. We knew we were in for a unique experience.

Once seated, a waiter promptly greeted us, ready to take our drink order. Holdren’s is known for its imaginative martini list, offering such selections as the Mandarin Kiss or the Caramel Apple Martini, so my dining companion opted for a Chocolate Éclair Martini. Crafted from Absolut Vanilla, Kahlua, and Bailey’s, and finished with a chocolate rim, it was decadent enough for dessert yet still light enough to be a wonderful aperitif.

Our waiter proceeded to recommend the wine currently featured on the wine list—a 2005 Brophy Clark Pinot Noir from Ashley’s Vineyard in the esteemed Santa Rita Hills—which intrigued me enough to give it a go. Setting an empty glass in front of me, he poured my wine tableside from an individually sized carafe, letting the wine flow into my glass in a flourishing cascade. It was a nice touch—not only was the presentation impressive, my wine benefited from a little extra aeration. The wine was light, earthy and bursting with cherry flavors; everything one would come to expect from a Pinot Noir, with a liveliness most likely due to its fresh youth. And this wasn’t the only gem on the wine list. Although predominantly focused on local producers, it also included crowd-pleasers such as New Zealand Sauvignon Blanc, heavy hitters from Napa such as Opus One, and a few big reds from Tuscany and Piedmont that would stand up to any steak.

We began with Clay’s Shrimp Scampi: prawns sautéed in garlic butter with capers and sundried tomatoes and served with slices of toasted ciabbata. A single orchid garnished the plate, the first of many. The prawns were plump and juicy, perfectly cooked. Their tender, meaty texture juxtaposed agreeably with the crunchy garlic bread, and the tangy capers and sweet sundried tomatoes lent a fresh spin to this classic dish. The only thing left to be desired was more bread to soak up the remaining sauce!

Following the Scampi was another take on a standard, Spicy Crab Cakes. This dish was almost a meal in itself, or at least a satisfying lunch. Three pan-seared, herbaceous crab cakes were served on a bed of rice pilaf, accompanied by a tart and creamy lemon-Dijon sauce. Crab cakes can be an elusive dish for some; with so many regional styles, it can be hard to please everyone. But Holdren’s crab cakes possessed crispiness on the outside while retaining their moistness inside, and struck a suitable balance between crab and filler.

The entrees were preceded by a choice of soup or salad, and we sampled one of each. While the salad was a basic, fresh, garden variety, the featured tomato basil soup was one of the best I have tasted of its kind. The vibrant pureed tomato was paired with hints of bright basil and shaved parmesan cheese. Although the parade of culinary delights that had been set before us thus far was certainly enough to fill, we felt compelled to soldier on to the main courses, Holdren’s Stuffed Chicken and 6-oz. Filet Mignon.

The true test of a steakhouse goes without saying, and Holdren’s did not disappoint. The filet was cooked exactly to our specifications and arrived on the plate in an unassuming fashion, just steak and potatoes (garlic mashed, to be precise). I got the distinct impression that at Holdren’s the quality of the meat is meant to be the focus of the dish, although the smooth garlic mashed potatoes seemed to be vying for attention. We had selected a rich gorgonzola cream reduction sauce with rosemary, one of three sauce choices, as a supplement to this already brilliant dish.

Since we were dining in a steakhouse, I wondered if the same consideration would be given to the other, non-steak menu selections. I am thoroughly stunned to report that I was more astounded by the chicken than by the steak! Holdren’s Stuffed Chicken is a generous portion of juicy breast stuffed with spinach, ricotta and Dungeness crab and topped with a champagne buerre blanc sauce. Naturally, I selected a glass of Spanish Cava to pair with this dish, and the tiny bubbles helped to cleanse my palate after each opulent bite. Choosing vegetables as a side, I was pleasantly surprised to find anything but the customary steamed broccoli or green beans staring back at me. In its place stood a colorful array of char-grilled red and yellow bell peppers and green and yellow squash. Not only did it dress up the plate with festivity, but the sweet, crisp vegetables were one of the most enjoyable parts of the meal.

Amazed that there was room for anything else, we perused the dessert menu. This proved to be a daunting task. Selections included classics like New York style cheesecake and a personal favorite, Crème Brûlée, as well as innovative creations such as do-it-yourself S’mores by the Campfire. We elected Holdren’s Mudd Pie for our grand send off, and the combination of coffee and chocolate ice cream and Oreo cookie crust topped with fudge and whipped cream just about did us in. Fully content, we tottered out of the old-time steakhouse and back into the warm Santa Barbara night air.

From start to finish, our experience was most pleasing. Although Holdren’s is typically bustling with activity and noise (reservations are a good idea on any given night), our booth was somehow cozy enough to allow us to enjoy some privacy. It would be a perfect place for a romantic evening, a large get-together, or many occasions in between. 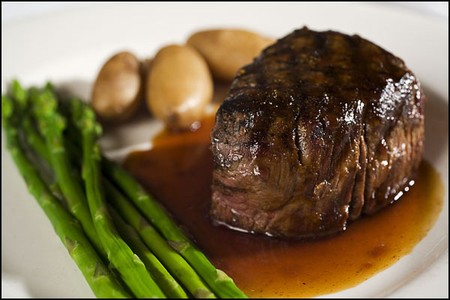 All of our steaks are Midwestern corn fed beef aged to our exact specifications. We charbroil all of them over our mesquite grill and serve them with your choice of soup or salad. Also comes with your choice of potato: baked, twice baked, garlic mashed, fries or rice pilaf. We can blacken any steak upon request. Please ask your server.

S’mores on the Campfire 7.50
Just like sitting around the campfire roasting marshmallows, only this time it’s at the dinner table
Double Chocolate Sin Cake 6.50
A chocolate masterpiece drizzled with fudge and strawberry puree
Caramel Apple Cobbler 5.50
A traditional favorite with a caramel streusel topping
Vanilla Crème Brulee 6.50
This classic dessert is topped with fresh berries
Holdren’s Mudd Pie 7.00
Chocolate and coffee ice cream layered in an oreo cookie crust and topped with fudge and whipped cream
Lemon Tart 6.00
This tangy delight is popular with many fruit lovers
Cheesecake 6.50
Traditional New York style cheesecake is served with fresh berries