In September, 1991, a small restaurant on the edge of an esoteric neighborhood in Venice, California, opened to rave reviews. Utilizing the talents and experience acquired from his training at the Culinary Institute of America, from cooking at such restaurants as Le Perroquet in Chicago, L'Orangerie here in Los Angeles, and from working for Michael Guerard in France at Eugenie-Les-Bains, Chef Joseph Miller took matters into his own hands.

Joe received his first recognition as a chef at Katsu in Los Angeles. In keeping with Katsu's intimate, casual style, he opted to open a neighborhood restaurant serving French-California gourmet cuisine at affordable prices. Joe, along with members of his original staff at Cafe Katsu, worked diligently. Within only a month of fixing up the space on Abbot Kinney, the doors opened. The result is Joe's Restaurant, currently rated by Zagat Survey as one of the top ten restaurants in Los Angeles, a reputation prospering through numerous positive reviews by major publications in Los Angeles and throughout the United States.

Joe's has continued to flourish, due in large part to the excellent kitchen and wait staff the restaurant is able to attract, thereby creating a consistently fine dining experience.  Joe's Restaurant has been in business for twelve years. In November 2000 an extensive remodeling of the interior restaurant and kitchen was completed to bring Joe's into the 21st century. And a new dining room and patio were completed in the Summer 2001. The patio was expanded to accommodate more diners under a beautiful wooden trellis and waterfall fountain.

Joe has also taken his cuisine on the road, his catering services requested at weddings, premieres and wrap parties, holiday events and intimate dinners in private homes. The same personal flair he offers in the restaurant is apparent in menus specially created to match any occasion. The best way to judge our standards, however, is to come in and experience the menu for yourself.

With the assistance of the prestigious Hatch Design Group, Miller has redesigned Joe's, giving it a cohesive, elegant feel while still retaining the intimate warmth that people associate with both him and his restaurant. Though the façade and basic structure of the restaurant remain, the renovation transformed what was once a homey 50-seat restaurant into an elegant, understated space that can seat up to 100 people.  The remodeling not only changed the look of the dining space, but also updated all kitchen appliances and restaurant finery, including the china, silver, and glassware.

The new design uses warm earthy tones-like a buttery yellow for the main dining room-highlighted by distressed burnt-red window trim and rich maple floors.  The oak wood used for the details and floor was taken from an old barn from the East Coast, providing a slightly worn look and enhancing the softness of the room.  Splashes of deep pumpkin and maroon accent various walls throughout the restaurant, giving the impression of space and intimacy simultaneously.  Banquette seats are covered in pale beige leather, while their backs are upholstered in a handsome beige and mocha-striped twill.  Lovely black and white photos by photographer Joe Goode, framed simply in black, adorn the walls.  The modern Shaker-inspired chandeliers carefully illuminate the room with a flattering, golden glow.  Outside, Joe's offers additional seating in an intimate outdoor patio, which is painted warm mocha and trimmed with same oak that's found in the interior.  On one of the walls, a new stone waterfall creates a calming, comforting whisper as you dine. 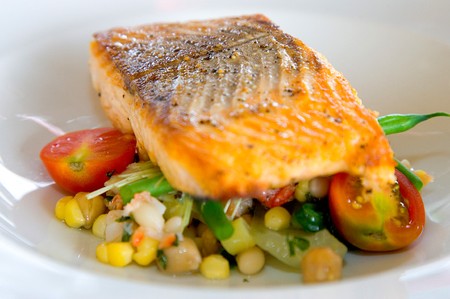