Originally owned by Daniel Sidhoum (Olga’s brother), the “new-and-improved” Pescadou Bistro remained in the family after Chef Jacques de Quillien and his wife Olga took over in 2002.

Olga, raised in Southern France and Paris, and Jacques raised in France’s Loire Valley and Brittany, bring a eclectic French Cuisine perspective to Pescadou Bistro. Chef Jacques de Quillien was previously the owner of Le Mistral, in Corona del Mar. Prior to Newport Beach he worked as a Chef in Montreal, Coral Gables, Houston, and San Diego.

Dear guest,
All requests are accepted upon arrival.
if a timeslot is not available, please try the next one prior or after for openings, or call the restaurant to be on a waiting list.
Please let us know if you have any special diet of allergy.
We are looking forward to serving you. 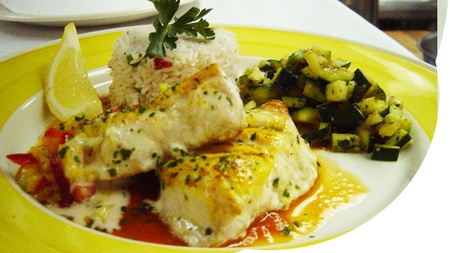 French food at its best, great service, awesome atmosphere. Quality is on par with the best restaurants in France !

Love this place!!! Going back asap!!!

This the perfect French bistro 6,000 miles from France. The servers are savvy re the menu & the wines. The food is prepared fresh & the seasoning is perfect. Merci beaucoup!

The best French restaurant in Orange County. Very intimate. Service is always great. Food is always terrific. They should add specials to the menu.

The food & service was awesome! I always have a great experience eating here.

This is a favorite of mine in Newport. The food is always delicious and the service is attentive. On my latest visit I enjoyed the potato leek soup along with the cassoulet and floating island. The meal was accompanied by a wonderful Châteauneuf-du-Pape.

Fabulous food and outstanding service. The best cassoulet I have had. Highly recommend.

Love Pescadou. Every dishes were excellent. Even bread & salted butter were so good. We had 8 people & ordered escargot, mussels, rabbit, lamb, duck & sea bass. Service was excellent as usual. We missed Jack but was well taken care of by his son.

Had a wonderful dinner celebrating our wedding anniversary. They gave us an anniversary Crème Brûlée, just so nice!!!

Pescadou Bistro is a family atmosphere & owned. It's Chef's are unparalleled & Food is Award Winning & always looked for twice every year for 21 years, a few hiccups here & there throughout to try another place just because & not because of the Food & returned the next year & following years & intend to for years to come. Why return, why so many times, well when you have a small, intimate place, family owned & family operated & the food is among the best in all of Orange County & French done well like it should be & it's off the beaten path or radar & throw in owners know their clientele by name & what they enjoy & great service, well than you have something & why would go anywhere else for special events. I've experienced things I never would anywhere else & it's truly French Food done with respect. True gem & worth it every time.

The servers were attentive. Jacques was warm, hospitable and GENEROUS! Food was savory and well presented!

Great everything. Glad to see the business going great.

Pescadou is our go to restaurant for excellent french cuisine. The food has never disappointed and the service is excellent.

The restaurant announced it was cassoulet time earlier in the week. I took my mother here so we could relive our trip to France 15 years ago, where we first had cassoulet. The food and service were wonderful. We loved the evening.

Such a wonderful place with great staff and food! We were there for our anniversary dinner and really enjoyed the experience!

Great. Loved our server ,, rabbit was the best.

Everything about the evening with our friends was delightful and delicious!

this was our second dinner here and it will surely not be the last.i would bring even the most discerning of my friends here without hesitation

Everyone did a great job! We will be back again for sure! :):)

The waiter was excellent and all four of us found our food wonderful. It was a bit noisy, but we were accommodated by being placed as far away from it as we could have expected.

Everything was wonderful. Great menu. If we can't visit France, Pescadou gives us a chance to taste and enjoy French food which is a great satisfaction.

Wonderful dining experience. We will definitely be back.

A lovely French country restaurant with excellent French preparations. We had a very nice server that took great care of us. The baguettes are addictive with the Charcuterie platter. Excellent salad and soup as well as the entrees. Our family had Duck, Trout, and Rabbit with perfect sauce pairings. We didn't have room for dessert but many appealing options. Look forward to our next visit.

I took my friend for a birthday dinner. Amy was our server and took care of us and made our experience memorable.

We had such amazing time with delicious French cuisine and great service at Pescadou Bistro. Thank you so much.

We sat outside under the canopy & sipped a delicious Bordeaux red with our swordfish plat principal. Our server was there to refilll our glasses & to serve the entre hot. I was with my daughter. Visiting from Miami. It was a memorable experience. Thank you for your attention to details.

Excellent food and service as always. We always enjoy eating at Pescadou.

We love Pescadou Bistro. We celebrate our anniversary there every year to reminisce about our meeting in Paris 57 years ago. The food and the service are absolutely the best. Prices are high, We'd go there more often, but for the cost.

So glad I found a French restaurant close to home. The food was excellent. Foie gras was a killer, mussels excellent. All staff including owners were very welcoming. A 10 on 10!

As always, an excellent meal. My favorite dish is floating island.

Best salmon I have enjoyed in years...the trout was great as was the duck...fantastic service and environment and can't wait to go back.

We absolutely loved the total experience. The food was impeccable! Can not wait to return.

We have always loved eating here. So happy to have returned after this long pandemic break. We will be back on a regular basis!

Pescadou Bistro is wonderful! We had not eaten at Pescadou during the Pandemic, but they are back. They present a most authentic offering as a French Bistro and the service was terrific.

Great birthday dinner. The mussels were probably the best we’ve ever had. Had salmon special and cassoulet also. Always enjoy eating here.