In Mid-City West LA on 3rd Avenue and S Croft Avenue, patrons enter the rock-clad building of Sushi Roku to experience innovative Japanese preparations that utilize ingredients unusual for a sushi restaurant. Sushi Roku’s menu features traditional nigiri and sushi rolls, but selections like the Salmon Carpaccio in truffle soy vinaigrette will excite guests’ palates with generous flakes of shaved black truffle. Edamane Hummus and the Albacore Tacos are bite-sized tributes to the clash of cultures found in LA. For those adventurous guests, the Sushi chefs are always happy to prepare untraditional dishes like halibut with kumquats, or toasted scallops with parmesan cheese and mushrooms. Dessert must not be skipped, especially with choices like the Zen Smores, featuring racked graham cracker sand made to look like a Zen garden, with a flame in the center so guests can toast the surrounding condiments. At Sushi Roku, the fish is fresh, the food is artistic, and the service genuinely so friendly that customers are sure to leave full and happy.

Sushi Roku May Roku Your World

Located on 3rd Street in the trendy West Hollywood area of Los Angeles, Sushi Roku has been satisfying the sushi cravings of its patrons for over ten years. The restaurant has been so successful that its owner, the Innovative Dining Group (who also own BOA and Katana) opened branches of this hip sushi restaurant in Santa Monica, Pasadena, and Las Vegas.  Perhaps the restaurant’s success can partly be credited to the invaluable experience of Innovative Dining Group Partner Michael Cardenas, who previously worked for sushi giant, Nobu, and managed the famed Matsuhisa restaurant on La Cienega Boulevard.  Whatever the case may be, the steady stream of customers for the last ten years is an impressive achievement in this town and a testament to the dining experience offered by Sushi Roku.

In a town where parking is usually a hassle, the valet team here expertly works the consistent line of cars, getting customers into the restaurant quickly.  When my date and I arrived at the hostess stand, our table was not yet ready, and so we were asked to wait in the bar for a few minutes.  Directly to the left of the entrance, the bar was crowded with posh young hipsters, some lucky enough to be sitting on one of the bar stools or standing around the hollowed out boulder-turned-fountain dramatically set in the center of the room.  The bar did not offer any wine other than plum wine, but had a nice selection of Japanese beer—including Kirin, Asahi, Sapporo and Red Sun, Sushi Roku’s own brew—a list of sakes, and a fun selection of house specialty drinks. My date ordered the popular Tokyo Lemon Drop, made with Ketel One Citroen Vodka and Cointreau, while I enjoyed a tangy Fuji Apple Martini, well-mixed using Nigori sake and Apple Pucker.

With indoor and patio seating, as well as a private dining room that seats up to ten people, this restaurant can accommodate large parties, though it is best suited to small dining parties of four or less. After a few minutes of waiting, my date and I were shown to our table out on the patio.  The patio’s décor is simple and elegant, as is the décor of the rest of the restaurant, utilizing stone, wood, and flowing water to create a peaceful, Zen-like atmosphere.

Though we were still enjoying our specialty drinks once seated, we perused the extensive sake list and were impressed with the variety.  Most sakes were offered in bottle and half-bottle sizes, allowing diners to sample a few selections.  For me, the Ozeki Ginjo was the most interesting on the list as it was the only selection brewed in California.  Dewazakura Dewasansan was also an interesting selection, described as having “wholesome freshness, green apple tartness and a refreshing finish,” and recommended to “wine drinkers new to the world of sake.”  In addition to tantalizing flavor descriptions, the sake list was also helpful in matching sakes with various dishes on the menu. We toyed with the idea of ordering a couple of these tempting choices, but decided to order another round of the wonderful specialty drinks we had just enjoyed.

The menu is uniquely divided, with a ‘Cold Appetizers’ section offering dishes from the ‘Garden’ and ‘Sea’ as well as traditional ‘Japanese Salads.’  The ‘Hot Appetizers’ section lists a variety of traditional and cutting edge dishes from the ‘Garden,’ ‘Sea,’ and ‘Farm.’ We started off with a number of appetizers: Kobe Beef Carpaccio with Garlic Ponzu, Japanese Yellowtail Sashimi with diced chilies, and Popcorn Rock Shrimp Tempura in a Creamy Spicy Yuzu sauce.

All dishes were beautifully presented on modern Japanese clayware, with delectable garnishes expertly appointed on each plate.  The Kobe Beef Carpaccio was perfectly seared, leaving a beautifully rare center in each tender piece of beef.  The Garlic Ponzu sauce generously covered each piece, resulting in consistently perfect mouthfuls of this Japanese delicacy.

The Japanese Yellowtail Sashimi was an instant favorite, marrying the sweet taste of fresh yellowtail with the savory flavors of chilies and ponzu sauce, which is a tart sauce made with soy sauce and vinegar.  Without a proper upbringing, anyone would surely lick the plate clean.

The Popcorn Shrimp also did not disappoint, with each tempura-battered shrimp covered in a spicy yuzu sauce, which is a blend of the Japanese yuzu fruit with spices and herbs in a light mayonnaise, creating a unique creamy-spicy flavor.  You may order the yuzu sauce on the side if you prefer to dip instead of ordering it ‘tossed.’  One could describe the Popcorn Shrimp as being a modern, Japanese comfort food.

Our sushi dishes came out next, with a Spicy Tuna Roll leading the way.  The Spicy Tuna Roll is one of my favorite sushi staples and there were no surprises here: a generous portion of tuna tossed with Japanese spices rolled in sushi rice and dried seaweed.  I also ordered Albacore Tuna Sashimi, which is white tuna, lightly seared and served atop a pat of sushi rice, with spicy radish and scallion as garnish and a splash of ponzu sauce.  I was disappointed to find the Albacore to be less than stellar.  It is usually one of my favorites in most sushi restaurants; however I would probably not order it again at Sushi Roku.

A number of entrees also caught my eye, though my bursting stomach wouldn’t allow me to order them.  I made a mental note to try the Roasted Lobster, Prawns and Hokkaido Scallops in Pink Peppercorn Olive Oil next time around, or even the Kurobuta Kakuni, an eight-hour braised pork dish.  I was also delighted to see a King Crab Miso Soup on the menu, an innovative twist on the ubiquitous Japanese soup.

I did however, leave room for dessert and enjoyed samplings of the Chocolate Soufflé as well as the Banana Spring Rolls with Caramel Sauce.  The chocolate soufflé is actually a molten chocolate cake, which was fine by me, though soufflé-purists may be ruffled at the mislabeling.  Served warm, with berries and ice cream, it was truly decadent and a chocolate-lover’s dream-come-true.  The banana spring rolls were innovative and obscenely delicious, leaving me wanting for more, despite the fact that my stomach had now gone from bursting to alarming.

Overall, I understand why this restaurant is popular: it is stylish, the staff is good-looking and well-mannered, and it is undoubtedly a perfect place to take a date or a business client.  The dress here is upscale-casual to dressy, and the space is beautifully decorated, with dim-lighting that creates a very intimate atmosphere, though the din of the crowd can be much at times. The variety of seating options offers different dining experiences – the sushi bar being more rowdy and the patio offering more privacy.  As the kitchen is open until 11:30 on most nights, it is a wonderful option for aprës-film fare. The menu is innovative enough to motivate one to make multiple visits back to try everything interesting, yet familiar enough to not alienate those of us who have our own sushi must-haves.  We found the service to be a bit slow—it was apparent to us that the food was the real star—so do not come here if you are in a hurry (or in bad company), but do come. 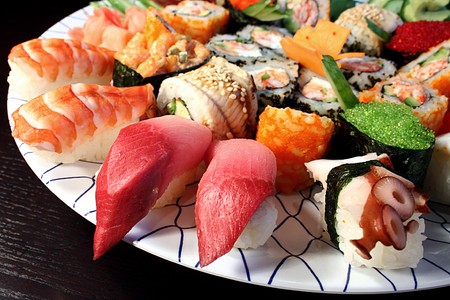 Sake by the Bottle