History of GENGY'S. The theme of Gengy's is originated from the founder of Mongol Empire who had invaded and conquered most of Europe, Asia, and Africa with his warriors. After they had won a battle they had a huge victory feast in the shelter with their shields turned upside down over the roaring campfires and cooks the newly discovered meats and vegetables native to the conquered lands. Gengy's restaurants have captured the idea of this fresh and tasty style of cuisine, and approached them in more modern and hygienic style. Come and discover our food! 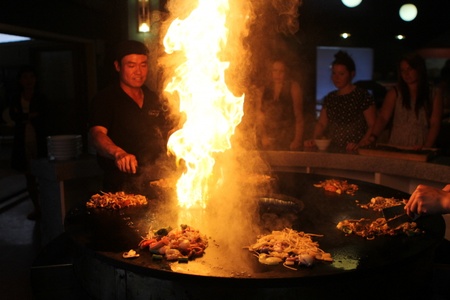 All You Can Eat Buffet Dinner

Gengy's Palmerston North All You Can Eat Buffet Dinner

All You Can Eat Buffet Dinner

Gengy's Palmerston North All You Can Eat Buffet Dinner

Always a nice feed and awesome service when we dine here, thank you

Had a wonderful time thank you.Great atmosphere lovely staff. Loved this place will be more than happy to return here for a meal.

Great for the 13 year olds birthday

Our family always enjoy coming to your Gengys restaurant. We are always given great service by the staff… very friendly and hardworking. We always recommend gengys to others.

I enjoyed everything. My only concern was if the three boys working at the grill were having enough breaks and drinking plenty of water.

Thankyou for the great service, dishes removed when dirty quickly, the staff always alert for this. Always a great selection of food available. One thing we noticed at the dessert area a child putting their hands in the sprinkles. Maybe a better container for the sprinkles would be nice to stop this happening again?

Absolutely fantastic venue. Had a booking for 19 people and all walked away very happy

Great experience as always, thank you!

Could not find any faults with anything here, your food was absolutely exquisite. I'll be definitely coming back again. There's just one slight thing, maybe you could introduce a few more dessert selections. Thank you so much for making my birthday dinner a special occasion that I'll always remember.

The staff are amazing and super friendly. They are awesome with my children and had no issues cooking my son 8 prawns and made sure that they gave him his plate directly. It's always a pleasure and my childrens favorite place to go for family birthdays

First time dining at Genjis. I loved the variety of food. But even better my kids actually ate the food. We'll definitely be going there again

thank you for the service everything was nice the food & the hospitality inside was great just this little food i didn't see is fried rice but overall it nice.

Such a wonderful clean restaurant to go to where the variety of food is a amazing, the staff so friendly. We travel 45km to have a meal there and my only complaint would be having to stand at the door in the cold wind until it opens on the dot of 5 pm. This has put us off travelling over during the winter months.

Everything was great, clean, set up was good, friendly chefs, they thinly slice the meat so it cooks fast, seafood wasn't over cooked, was really good

Great food, friendly staff. Great selection so everyone was happy with their meals.

I really love the selection of food you get, the staff are really great, the cooks get your food out fairly quick, I love coming here

Everything nice, yummy and easy to get to thanks for a great night.

this is a test

One of your team in particular was awesome - he saw us waiting to be checked in while the group in front of us tried to sort out their booking and immediately came to help and take us straight to our table. He was super helpful through the night as well. Wish I'd got his name!

The only suggestion I would have is the ice cream. Maybe replace the plastic containers with larger containers maybe like the ones that are used in dairys.

The Manager or the boss was absolutely amazing. Lovely service and beautiful Kai. Thank you Gengys

The table we were seated at was very dark. Made our dining experience weird.

We have a lovely time, thank you

Me and my partner had an amazing experience coming here for the first time. We will 100% be coming back and are recommending gengys to everybody :)

can't fault the meal at all it was lovely.

The food as always was exceptional

Everything is awesome..thank you very much

Me & my whanau enjoyed our first dine out at GENGYS Having 4 teenagers & 4 adults and one child all you can eat is the way to go as we all eat different food . Thumbs up from us & a huge thank you to all the staff Your a awesome team Thank you GENGYS Team

We thoroughly enjoyed our time together ❤ there. The manager that helped me was amazing. The cashier was outstanding

Loved how everything was accessible and food was served quickly. Despite not having to watch the guys cook it was a great evening had by my whanau.

Absolutely great service and the food was devine

We always have an awesome time here. It is a perfect place to take everyone cos it is a fair price and it caters for everyone's taste. We use go there for all our family birthdays before covid and are getting back into it now. It was my daughter's birthday.

We had a fantastic night. Great food and amazing cocktails ☺️ can't wait to go back.

Great meal and atmosphere the whole group had a great time

Great place for dining and entertainment. I will come back again : )

Always love coming here. Also love how we now use numbered tags and have the plates brought to the table. Maybe something they could keep doing once restrictions have ended.

We never eat out, this was a birthday treat for our son(13).. There was a little bit of everything for everybody so everybody left happy.

See you all very soon

Absolutely enjoyed our meal and will be back again!

Entering the restaurant, we were greeted with nothing but the utmost respect. Food was absolutely delicious & for the price there is nothing to fault. Upon leaving we were very full & very happy. Will definitely return regularly.

Great experience and food. Shout out to all the staff at Gengy's Palmerston North branch!

We love Gengy’s, everyone finds something they love to eat there and you always leave full, even the kids. Birthday special is great too.

First time diner, absolutely enjoyed everything about it.

It was good we really enjoyed everything keep up the good work i would definetly go back here again!

We loved the mix of food. Salads, meat & vege to cook plus the fried foods ie. Chips, nuggets, spring roll etc although this stuff was low in things Enjoyed our meal. Thanks

The food is so beautiful and also the service .Thank you for having us at the last minute booking

I absolutely loved everything about my experience that was our first time being there I would definitely go back..

We went with a family group of 15 and were celebrating 3 birthdays. We thought this was perfect for a family dinner and will definitely go again.

First time been here, Omg love this place definitely taking the kids back thankz to the cooks you guys made the food awesome and good to watch

Always love it here, wonderful service and even better food

We had a great time for our daughters 21st birthday, thank you.

Welcoming staff members. Food was amazing and all items were topped up as soon as they started getting empty. Slot of people there but not much of a wait time our family loved it.

Staff and everyone was amazing, food on the other hand would have been amazing if it didn’t smell & taste so burnt. It over powered everything.

Loved it! The food was amazing and the service was very welcoming. Great for the price and awesome atmosphere. Thank you will be back.d

Staff were all great!

Awesome variety of food up select from & yummy hotcakes cooked on the spot with other desert compliments to have with it. Staff are great, clearing dishes quick & efficiency..really really good value for money..

Love it! Everyone had fun

Staff were very polite and helpful. Seafood Chowder was beautiful

Everything was perfect when me and my daughter was there that night. We went home with a full belly

Really good food,the cooks were amazing I will definitely be back again

Thoroughly enjoyed my meal and your patience in allowing us to still have our table reserved, as we were running late (the teens delayed us gahhhh) but we made it and we were satisfied. Thank you :)

A greeting when your customers come through the counter. Apart from that everything 10/10

Personally I didn't come in but my daughter and her father diner there and they loved it,the environment the employees the food outstanding guys keep the amazing mini up and I will definitely promote my friends and family to your restaurant well done guys.

Love the fact that you can choose what you want to eat. You can eat as much as you can. Family friendly. Good pricing.

First time. Would have been nice to be explained how it worked although the card on table was there. It’s a busy place but that is because it’s self service. Great quality food and quick clear ups. Will definitely bring family back

I was incredibly impressed. Great atmosphere. Excellent service. Planning to bring the family back here in a couple of weeks. Thank you.

Everything is perfect looking forward to come again..keep it up