Fifteen years have slipped by since Philadelphia restaurant magnate Stephen Starr introduced Buddakan, his hip and bold “will-this-really-work-in-Philly?” concept restaurant. Suffice it to say, Starr's hunch that Buddakan would weave seamlessly into the city's historical fabric borne out with flying colors. Located at Third & Chestnut Street, directly across from Carpenters' Hall, Buddakan’s impressive presence in Independence National Park injects a unique kind of swanky funk and spunk into the city's oldest 'hood.

Outside Buddakan, there's always a lively buzz. A personable patrol of valet parkers greet everyone as they arrive. A kinetic mix of patrons, tourists, and Old City pedestrians mill about the large sidewalk in front of the building. Inside, the world of Buddakan unfolds within a former post office -- of which nary a hint nor vestige abides. The chic interior with its lofty ceilings and expansive dining space sweeps us into a different realm. Other diners saunter past a large wall of flowing water, passing mammoth circular columns that spire up to the ceilings. Centered in the dining room, a communal dining table of onyx guides the gaze to a tranquil, 10-foot-high, gilded Buddha awash in radiant crimson backlighting. Each chair back in the huge dining room sports a black-and-white portrait of some anonymous face. Hip, handsome staff members glide about ubiquitously, smiling and tending to their duties with flawless detail. And yet, as envisioned, this entire Zen scene somehow fuses harmoniously within the red-brick confines and cobblestone soul of our nation's most historic mile.

Stephen Starr claims no visionary prowess for such a transformational coup. He admitted long ago, “The Buddha idea just popped into my head.” Starr had toyed with placing a Cuban-themed restaurant in Buddakan's spot. However, to the delight of legions of Philadelphians and tourists alike, he settled on the Zen-Buddha vibe, because as he later opined: "People, no matter what their religion, get a warm feeling when they see the Buddha." And so they do. Characterizing Buddakan as a raging success is not fluff or hyperbole. Starr's restaurant has received such acclaim that he established the concept in Manhattan as well. For Philadelphians accustomed to witnessing that process in reverse and tired of playing second fiddle to the chest-thumping Big Apple, that's a feat, a Rocky-esque rally for hometown pride. Not to mention, there's also a Buddakan scion in Atlantic City.

And how popular is Buddakan in Philadelphia? Consider this: In 2010, Buddakan participated in Philly's annual Restaurant Week, where a host of downtown restaurants offer $35 prix fixe meals. Philadelphia foodies took note. As Buddakan Manager Josh Levine noted, “We had more hits at the Buddakan site than the Restaurant Week website itself did. We did 500 covers every night.” I happened to be dining here during Restaurant Week. At 10:00pm, every table was full and guests were still arriving.

I hasten to add that there was no dip or blip in the quality of service, despite the relentless stream of hungry arrivals. The Buddakan staff is an armada of attractive, attentive enthusiasts who have not only memorized the “rote details” of the menu, but who can wax rhapsodically about the nuances of each preparation, the derivation of each dish, and the singular touches that make it memorable.

To kick-start the meal there's a tempting list of specialty cocktails that play on the Buddha theme. “Enlightenment” first pops the palate with the heat of Thai bird chili cordial, followed by Sauza Blanco tequila, and finishes with a cleansing purée of cucumbers. It's like a Japanese mojito with kick. Or you can try the “Zen-gria”: a house-favorite dicey mix of white peach, Junmai sake, pinot grigio, and ginger brandy.

In addition to a full slate of western wines, you might like to try some Japanese sake. There are a number to choose from ranging from light-bodied varieties like Kaori to full-bodies like Otokoyama. Your server will guide you through the selection or offer you a Sake tasting, where for you can choose three full glasses for $30.

Although Buddakan soars with Asian fusion plates meant for sharing, don't discount the entrée menu; Chinese black bean sauce notches up the sizzle of whole fish, while the black pepper ponzu and the bite of wasabi temper the richness of succulent filet mignon. As for the small plates, a perennial favorite is the free-form Edamame Ravioli. Tender white pasta squares stuffed with velvety edamame puree arrive tableside bathed in a delicate broth infused with Sauterne and powered by deep-brown truffles and shallots. The bean filling is a winsome payload of edamame, leeks, and truffle oil puréed silky smooth. The dish is garnished with tiny whole edamame beans.

With my first bite of Tuna Pizza, I realize Buddakan's version has raised the pizza bar significantly. A generous ruby-red portion of tuna carpaccio, pounded thin and accented with pickled ginger, stretches across the entirety of a large, paper-thin pizza crust. Ponzu sauce and pickled jalapeno spikes the carpaccio with bold accents, while the spicy aioli spread on the crust lends a sweet, pungent undercurrent to the ensemble. As a masterful final visual touch, the carpaccio topping is sprinkled liberally with bonito flakes.

The Grilled Octopus plates a tantalizing tangle of grill-kissed, marvelously tender octopus pieces. The meaty octopus texture softens and soars with two sauces: a miso reduction that infuses sweet highs into each forkful, and a hot chipotle miso sauce provides a spicy balance to the creation.

The Crispy Duck Salad gathers a garden of greens in delectable harmony. Finely sliced and shredded Bibb lettuce, paper-thin cucumbers and shredded wontons meld with Shitake mushrooms. The mélange is sluiced in piquant sherry vinaigrette and topped with a poached egg; this touch gives an earthy feel to the busy-yet-balanced dish.

Peking Style Chicken perches atop a mound of glistening eggplant spears. Wafting a heady scent of garlic, the crispy-skinned chicken proves moist yet lean, and surrenders readily to a fork. Pooled around the chicken is a pale pink chili-soy-garlic sauce that perks up the taste of the chicken and insinuates a tasty, muted heat to the dish.

As a fitting finale, the Chocolate Bento Box for Two has become another Philly treasure. A traditional wooden box is distinguished into six compartments, each holding a singular sexy, decadent dessert. On any particular evening, the culinary booty might include spectacularly creamy panna cotta, ganache, silky mousse, or flourless chocolate cake. Order it; savor it, and be sure to include a visit to the gym the next day. Guilty pleasures like this are worth the payback.

Yes, the City of Brotherly Love was the main crucible for the New World's melting pot. And though there was no prominent Buddha in the Quaker city's halcyon history, there certainly is one in its gastronomic, food-centric present. You'll find him in the culinary temple that is Buddakan.

Insider Tip: The Communal Table is great for large parties with space for up to 24 people, but for those in need of a somewhat private dining space, the Mezzanine is available to book for parties of 50-55 people. 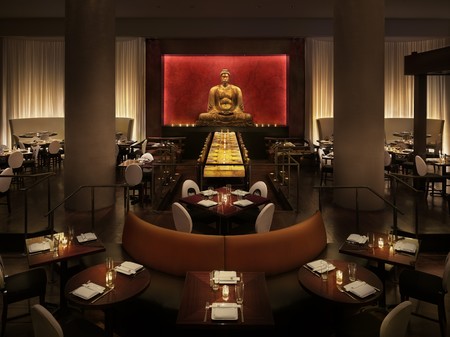 Is Buddakan open for lunch?
Buddakan is open for lunch Monday-Friday 11:30am-2:30pm.
Do you accept Diners Club Cards?
Yes
How far in advanced can reservations be made?
Buddakan accepts reservations up to 60 days in advanced.
Does Buddakkan accept all major credit cards?
Buddakkan accepts American Express, MasterCard, and Visa.
Do you have other locations besides Philadelphia?
Yes, Buddakan also has locations in New York City and Atlantic City.
What Philadelphia neighborhood is Buddakan located in?
Buddakan is in the Old City neighborhood of Philadelphia.
Do you have valet parking?
Yes, valet parking is available after 5:30pm for $18/vehicle.
Would it be okay to bring ten-year-olds for dinner?
While children are welcome at Buddakan, the restaurant's more formal atmosphere may not be considered child-oriented.
Do you deliver?
Yes, Buddakan delivers through DiningIn.
Do you have gluten free menu?
Yes, Buddakan offers some gluten free options.
How can I get a gift certificate for Buddakan?
You can purchase gift certificates for Buddakan on their direct website http://shop.starr-restaurant.com/

Following the tradition of Asian cultures, Buddakan provides a family style dining experience by offering plentiful portions designed to be shared. It is Buddakan’s suggestion that you pass our plates amongst your friends and companions and embrace this custom as well. Our servers are here to guide you, so please call upon them for the smallest of favors. Buddakan has no set rules. Be creative, have fun and follow your own path. 20% gratuity will be added to parties of six or more.