Only a few strides removed from the Forrest Theater in the gentrified neighborhood of Wash West, the Caribou Café corrals a hip mix of city crawlers, theater goers, local and national personalities, and plain old Philly folk. The festive décor in this vibrant slice of France frames the intoxicating upbeat insouciance that replicates the spirit and verve of the real-deal French café. The moderately priced menu focuses on regional everyday French standbys while simultaneously providing a gastronomic tour of France. Diverse delights from Alsace to Provence tempt the palate – all interpreted delectably by Maitre Cuisinier de France, Olivier Desaintmartin.

A Savory Slice of France in Wash West 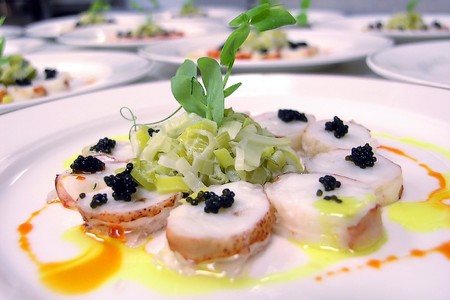 Is there a special room or seating area available for large parties?

Is the brunch menu pre fix?

No, Caribou Cafe has an a la cart brunch menu.

aRE YOU HANDICAPPED ACCESSIBLE?

This is the third year in a row my wife and I have visited Philadelphia from lower Delaware and the third time in a row we have eaten at the Caribou Cafe. The food is wonderful, rich and tasty..the service is always attentive - our server was Carrie Anne, very pleasant and close by for any request. The atmosphere is like a French cafe with art deco pieces and warm,dark woods..a great bar also. We have eaten upstairs but prefer the downstairs booths near the bar. Caribou Cafe never disappoints; a tad pricey but you get a great meal guaranteed.

This restaurant was absolutely amazing! The ambiance, the food, the drinks, and especially the waiter, made it second to none! Jamie is amazing and well suited for his job! The entire staff was nice! I am glad that we found them online. The Hawaiian Butterfly Fish was so wonderful and the chocolate dessert was one like I have never had before! By the taste of the food you could tell that a lot of talent and preparation went into it. I wish we lived closer but the trip was worth it! We will be back! I would definitely recommend Caribou Cafe!!! It is a must!

An Evening at Caribou

While in Philadelphia on business my wife and I wanted to find a great place to eat without paying exorbitant rates. Being from NYC and after spending years in the food business we are rather spoiled and food conscious to a fault. On line I found 2 places that looked appealing, Caribou and Zinc. Seating at Zinc was too late for us since we were calling last minute, but Caribou called back and confirmed. We were more than pleased. Adding 2 more to the table, we loved the authentic French Bistro ambiance and wonderful menu. We had fantastic hanger steaks, escargot, salads and fish. Excellent wine, spirits and service and a very reasonable bill at the end. My only regret was that I didn't order the canard confit! Well........a perfect reason to return!

A slice of Paris in Philadelphia

Ambiance, service and food is fantastic. Quite a value considering the cost of airfare to France.

Our lunch at the Caribou Cafe was like being in a Paris Cafe. The outdoor seating is like what you see on the Blvd. St. Germaine. The food is wonderful. And the deserts are marvelous. There is a great wine list to chose from. Caribou Cafe is a jewel in Center City.

A little Paris in Philly

This is my favorite restaurant in Philadelphia. Enough said!

Felt like I was in a little bar in the suburbs of Paris. Laid back,not pretentious great french comfort food. I could eat their cassoulet every night.

Great food and service. A must try :)

first time though we lived in the area 8 years-now we live in AC -needed a place for graduation family gathering-food choice for everyone from the picky brother in-law to the snooty Mom --everyone was happy- food -service -ambiance all great!! We will be back. thanks for a memorable afternoon-my niece will always remember the day with fondness. thank you. Amy-Morgen Heinze

Our Great Experience at Caribou

Our experience at Caribou was more than we expected. The food was beyond our expectations, and the service was great!! We will return again soon. Thank you for making our theatre night enjoyable!!

I met some friends at Caribou Cafe (made reservations ahead of time) for a brunch. It was the first time eating there for all of us. We took one look at the menu and all agreed we couldn't decide--it all sounded amazing.SO, when in doubt go with the special! We each ordered the seafood crepe special with a side of greens. Delicious. Service was fast, but we did not feel rushed. They did not care that we sat outside to chat, while others were waiting for a table. I would return again!

We would definetely go back.

The food was good, the service was great, the prices were reasonable and the atmosphere was nice. We would definetely go back.

I always enjoy my visits to the Caribou Cafe. The food is delicious, even the butter tastes like butter does in Europe. The bottled wine list is fantastic, and the wines by the glass are much more varied than most other restaurants. The live music on the weekends and the large floor to ceiling windows in the front, which are truly a joy when open in the spring time, combine to provide a Euro feel that you would normally expect to drive to New York to find.

I loved every bite ! All we needed to make the experience supurb was direction through the menu and suggestions.

I enjoyed the restaurant and saw a lot of items on the menu. I would like to go back and try and what I had was excellent.

The food was excellent and very fairly priced. The ambiance was also great. The only thing that detracted from the night was the fact that our server seemed disinterested. Overall, highly recommended for a romantic evening, especially for the price-conscious person.

Great food and service at a good price, I had the salmon and it was very good. We really enjoyed our server she was very nice and made us feel special.

As a regular visitors to France and lovers of French cuisine, my wife and I were delighted to find the real thing at Caribou Cafe, during our stay in Philadelphia.

nice experience for an early meal outdoors. Happy hour prices and sliders were a real deal, but main menu is on the steep side for a casual spot. Staff was great

Caribou Cafe - a piece of Paris

It was our first time to the Cafe. I have had the pleasure of traveling to Paris on a number of occasions and was most pleasantly surprised -- Caribou Cafe could be a transplant from the City of Lights -- wonderful interior, great wine and beer selections and very good food. Waiter service was excellent -- friendly (but not overly), informed about their dishes and willing to make recommendations. We will be back!

I am not very knowledgeable in French Cuisine but the performance and atmosphere they offered at the Caribou Cafe was quite outstanding. The wait staff met the needs of our visit. I will go back there when I need to impress family and friends of my knowledge of the city.

Excellent food but the wine was overpriced and the portions could be bigger. Fantastic waitstaff was very knowledgeable and courteous. Great bread. Outdoor dining was very nice but subject to unwanted homeless people begging for money on the way by. Try the skate if you go.

Good food but too quick!

3 Stars may be a little harsh as the food is very good but the service was a little quick for us English who do not like a rushed meal! the atmosphere for a Saturday night was quiet but this may be explained by the fact that it was memorial day weekend