La Famiglia is located in Old City, Philadelphia, which is bustling with restaurants and nightlife. Started in 1976 by the Sena family, La Famiglia continues to deliver fine Italian cuisine served in one of Philadelphia’s most opulent dining rooms. The menu takes a sophisticated twist on Italian classics, with entrees such as Vitello con Funghi Morel, veal medallions with marinated morel mushrooms in a Madeira demi-glace. The award winning wine list offers over 450 bottle options, in addition to the restaurant’s full bar. La Famiglia proves an ideal venue for a special occasion, or an extravagant dining experience.

La Famiglia is located on South Front Street in historic Old City, in a space that was formerly a Colonial tea warehouse. It sits amid the hubbub of nightlife, dining, boutiques, and galleries that give Philadelphia’s oldest district its small town charm.

At La Famiglia brothers Gino and Giuseppe carry on the Sena family culinary tradition, which began in1947 when Carlo "Papa" Sena began to cook in postwar Naples. Carlo opened La Famiglia in 1976, bringing with him recipes and experience from his native Italy. Now, his son Geno serves as the head chef while Giuseppe handles pretty much everything else.

La Familglia’s décor manifests Renaissance opulence and charm, which practically oozes out of the cushioned, pale crimson walls. The bar is located at the front of the house, where a hostess greets guests and offers to take coats. The bar is a destination in and of itself, with a long, curved granite surface and full liquor offerings. The dining room is sectioned off from the bar with floor-to-ceiling, heavy curtains, which the hostess pushes back when showing guests to the dining room.

We were seated in the back of the first floor main dining room. There is also a banquet room and a smaller bar located on the second floor. The second floor is set up to host larger parties for dinner, while the first floor mostly accommodates groups of two to six. There is also a private dining room, which seats 25-30 people. The charm of this private room is accentuated by fresco-adorned ceilings and bottles of aging wines enclosed in glass cabinets amidst the brick walls.

Most guests were dressed elegant-casual. Men around us donned suits and ties or at least a shirt and a jacket (jackets are recommended). Most of the women opted for dresses or cocktail attire. The patrons’ spruced up appearances are surely to keep up with the elegance of the main dining room. Ornate light fixtures, real silverware, and tuxedo-clad waiters set the mood for an evening of elegance.

We were almost immediately greeted by a waiter who asked for our water preference. Almost immediately after that, the sommelier approached our table with a wine list that rivaled Tolstoy’s War in Peace in pagination. The sommelier was extremely professional and was as concerned about our wine choice as if we were investing in a sports utility vehicle; by the prices of some of the bottles, we might as well have been. This is not to say, however, that there are not many reasonably priced, interesting wines to choose from. The 450-bottle, award-winning list focuses primarily on Italian wines, and not just your normal Chiantis. The Italian wines, organized by region, include varieties not apparent on your everyday wine list, such as Amarone, Dolcetto, and Nebbiolo. The list, which also emphasizes California and French wines, is extremely well thought out,as if each and every bottle has been chosen for a reason. The wine list more than does justice to dessert, offering a choice of over 20 ports, 30 brandies, and enough moscatos and vin santos from the 80’s and 90’s to make to make you ask, “Sauternes, who?” And all these options are just bottles. La Famiglia offers about 12 wines by the glass, including red, white, and prosecco. You will not be thirsty at La Familglia.

Before I delve into the food, a quick note about the repercussions of the copious beverage options at La Familglia: because the restaurant has put such an emphasis on beverages, most diners end up having at least two or three drinks. This in turn greatly lightens up the whole mood of the restaurant, as the noise level, with all the convivial revelry, is above average for such a formal restaurant, in a good way. Although the setting is opulent and formal, guests feel free to talk, laugh and have a good time, which a refreshing change in the world of white table clothes and the demeanor they generally yield.

My guest and I opted for glasses of the 2004 Jewel Cabernet, which were brought to us within minutes of our order, by a waiter who we had not yet been introduced to. While the service was generally attentive and on point at La Famiglia, I did find it interesting that throughout our evening, we had about three or four different people bringing things to our table, and I wasn’t quite sure who was our waiter. The sommelier left us for good when we mentioned we weren’t going to order a bottle, and was replaced by another older male to help us with the by-the-glass list. A different waiter from the one who took our water order, came to ask about the food, and yet another brought us our check at the end. In any case, I think it is fair to say from observing parties who ordered more wine, more food, and who were generally racking up a larger tab than us, that service is rendered in proportion to your bill.

Snacks brought with the wine included bread sticks baked with nuts and herbs, along with bread and red-pepper-infused olive oil, with pieces of pungent red pepper generously portioned throughout. Both were a delicious way to whet our appetites. We were given time to savor the first few sips of our wine before being brought the two-page menu. This timeliness seems a conscious effort by the staff to heighten the luxury of the meal. You don’t come to La Famiglia to eat; you come to dine.

After being read a list of the daily specials, which included two antipasti, two pastas, one lamb, and one fish dish, we were given time to peruse the menu. The menu, typical of a Northern Italian menu, is set up in three main categories: Antipasti, which includes hot and cold appetizers as well as salads, with prices ranging from $9-$18; Primi Piatti, comprised of a variety pastas that are $16-$18 (these can be served as entrées for an additional $6); and Secondi, which includes about ten meat and fish choices, which are priced from $27-$79.

With gentle guidance from our waiter, my guest and I opted for the Carpaccio di Storione, thinly pounded sea sturgeon. The sea sturgeon was presented on an oversized round white plate under a bed of mixed greens, with capers, chopped scallions, and black olives sprinkled on top. The light, citrus dressing complimented the clean, fresh flavor of the fish, while the capers and olives provided a salty Mediterranean accent. The sturgeon was sliced paper thin and practically melted in my mouth. It was quite a piquant way to commence the meal.

The Insalata di Indivia e Rucola, endive and arugula salad, arrived on a similar plate. The crunchy endive provided a gentle reprieve from the peppery arugula, while crispy pears added a sweet compliment to salty Parmagiano cheese. Toasted walnuts were crumbled on top, adding texture and an earthy flavor to the salad, while a white balsamic vinaigrette was light enough not to overpower, but rather just brought the flavors of the overall satisfying salad.

The plates were taken away after we were finished, giving us a good eight minutes to digest our starters before the main dishes arrived. The Penne alla Famiglia was plated generously in a large white bowl and was tossed in a light creamy tomato sauce. The chopped, translucent onions were rendered copiously throughout the dish and provided the main flavor. If you don’t like onions, you will not enjoy this dish. Fortunately I do, and so I found the mild yet pungent flavor pleasing amidst the al dente penne. My only complaint was that the prosciutto, the main reason I ordered this dish, was indiscernible. I am assuming it was cooked together with the onion, creating a thick ragu, but I would have preferred to see and taste the prosciutto on its own.

The Scaloppine con Carciofi, braised veal medallions served with artichokes, sun dried tomatoes and fresh oregano in a white wine garlic sauce, was presented beautifully, again on a large white plate, garnished with cut up parsley. Four small veal pieces were cooked tender and were rendered with a delicious white wine sauce. The artichokes were soft and woodsy, while the concentrated flavor of the sun dried tomato added a fresh kick to the otherwise hearty dish. This dish is one of the most popular at La Famiglia, according to our waiter, and I could see why.

After our plates were taken away, we were given some time before a waiter asked if we would like to see the dessert cart and if we’d be interested in any after-dinner beverages. We said yes to the dessert and no thank you to the digestif; we were pretty much full, but couldn’t pass up on the illustrious cart we had been eyeing all night as it traveled throughout the dining room. The cart was rolled over to our table and the waiter described each dessert in detail. The Italian classics were all there, providing around 10 sweet choices as varied as cakes and profiteroles.

The fluffy tiramisu looked irresistible. It arrived less than five minutes later in a medium sized cup. The airy, creamy mascarpone was layered generously atop the liquor-infused ladyfingers, proving the perfect ratio of cream to biscuit. I would have it examined the structure of it more carefully, but it was gone in a matter of seconds.

Our meal at La Famiglia was truly one of decadence and indulgence, Italian style. The opulent décor, food, and service provide a perfect setting for special events, or just a first-class night on the town. 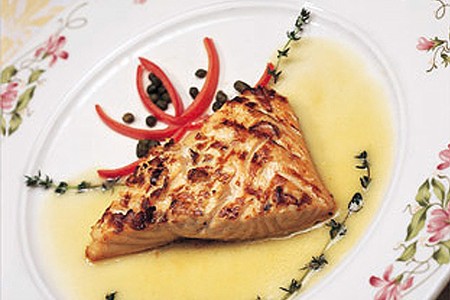 All of our pasta is made daily on the premises.