At Thirst Wine Bar & Bistro, location and wine are everything. The outdoor patio is located downtown on the bank of the Columbia River, and during the summer it bustles with wine lovers sipping vino. During winter, the view can be enjoyed from the elegant indoor dining room through the restaurant’s giant glass windows. Special attention is paid to local wines, and Oregon wine country provides significant inspiration: its selection of Pinot Noir and Pinot Gris is always offered by the glass. Many menu items are geared toward accompanying the wines, combining American dishes with fine-dining techniques from Italy and France; but the wine and location are the real stars here.

When owners Leslie Palmer and Gary Kneski opened Thirst Wine Bar & Bistro in 2006, they wanted to fill a void: The beautiful waterfront area in downtown Portland did not offer a wine bar. Four years later, the restaurant remains wine focused; and if you think a good glass of wine goes well with a beautiful vista, the restaurant provides a lovely pairing. The restaurant is located on SW Montgomery Street at the southern end of Waterfront Park. This area of the park is secluded yet close enough to the action that the sounds of outdoor concerts can sometimes be heard in the distance. The menu is Pacific Northwestern, with a little help from Italy and France. It is popular among the post-work business crowd, standing out for its 30-plus wines by the glass, its well-attended wine-related events, and its unpretentious comfort food.

Throughout the year, Thirst hosts exciting seasonal food and wine events, from complimentary wine tastings to clambakes. At times, these events are offered several days a week, and tickets are sold in advance. In this way, the restaurant keeps its repertoire fresh and its mood festive. Perhaps the most impressive event is the Winemakers Dinner, for which chef Leslie Palmer works with local wineries to design a tasting menu with wine pairings. These events always focus on one particular winery, and the winery’s spokesperson—sometimes the winemaker—helps lead the night’s festivities.

The sun was setting when I parked at the nearby parking garage, for which the restaurant offers vouchers. The paved boardwalk on the waterfront held a combination of diners, joggers, and those just out for a stroll. Upon arrival to the restaurant, a server immediately offered my girlfriend and me a seat at the café-style patio tables, with the water a mere 15 feet away. Rowing shells manned by upwards of 20 people skimmed like water bugs across the river, the bowmen yelling orders to their crews. An outdoor orchestra was tuning up in the distance.

The interior of the restaurant offered an elegant alternative to the outdoor seating, with large windows affording waterfront views. A long bar comprised one wall of the restaurant, with wine bottles artfully stored in racks that almost reached the ceiling. Long yellow drapes hung on the walls, separating the tables and lending a feeling of privacy. Orange-tinted lighting completed the warm ambience, making it a welcoming environment ideal for sipping wine on colder nights. Tasteful murals were also painted on the walls in some areas of the restaurant.

The list of wines by the bottle featured domestic wines only. The list featured several mainstream wineries, as well as several smaller producers; and Pinot Noir reigned. Make sure to ask for other wine specials, as the selection sometimes grows more quickly than the menus are updated. Several interesting flights were also offered, including a Scotch and Bourbon flight. “Battle Flights” could be a fun way to compare and contrast domestic and foreign wines, pitting U.S. wines against international wines.

The dinner menu was primarily composed of antipastos and starters, with a selection of around seven entrees. I found the Italian-inspired antipastos pleasantly interesting, with good descriptions of the day’s cheeses.

We tried three-cheese plate of Artisanal Cheeses: Brillat Savarin, Humboldt Fog, and Shaft’s Blue. The dish arrived on a large, rectangular white plate, with the three cheeses carefully presented at sharp angles to one another. A small dish of salted nuts and a drizzle of honey were the only other components of the plate. I immediately noticed that the servings of cheese were quite large. The Shaft’s Blue had a wonderful acidity, while retaining its creaminess. The Humboldt Fog was well ripened, the outside nicely mottled with blue mold and the inside as smooth as silk. It was slightly less acidic than the Shaft’s Blue. But nothing beat the Brillat Savarin. A triple-cream Brie, it was the creamiest of all, with a slight mushroom flavor.

Next we tried two salads: the Caesar Salad and the Beet Salad. Both were very generous portions. The Caesar Salad arrived on a square, white plate and had a very simple appearance. The only colors were the white of the Romano cheese, the light green of the romaine lettuce, and the tan of the croutons. The dressing was creamy yet light, with just enough anchovies mixed into it for bite. The croutons were on the smaller side, and there weren’t many of them, for their flavors were there. Further, the romaine was nicely crunchy. A simple salad, it left me happy and hungry for more.

The Beet Salad was presented on a square plate, with the salad on one side and the heirloom yellow and red beets artfully nestled beside it. To unite the two elements of the dish, pieces of goat cheese were sprinkled over top with a truffled honey vinaigrette. I thought the truffle and beet pairing was very unique and really worked. The beats were cooked just enough so that they retained a crunch.

For an entrée, I tried the Pulled Pork over Polenta (diners are given the option of either Polenta or an Onion Roll). The server said that the recipe is a traditional recipe from Chef Palmer’s family, and “close to her heart.” I couldn’t guess all of the ingredients in the rub, but there was definitely cinnamon and perhaps turmeric or curry powder. The pork had the tenderness that I expect from a pulled-pork dish. The polenta had a silky texture and was one of the lightest polentas I’ve ever tasted.

I also tried the Thirst Burger, which was served on a square white bistro plate with a sundried tomato aioli and potato salad. Its appearance was clean and purposeful; the red aioli lending color to the plate. We also ordered a side of caramelized onions. The burger was a good size and cooked expertly, and the onions were delicate and sweet. The aioli had a nice tang to it, making it an appropriate substitute for ketchup and mayo. The potato salad was very traditional and a fine accompaniment for such a good burger.

To finish, we shared the Bittersweet Chocolate Bread Pudding, which our server highly recommended. It arrived warm and topped with a generous amount of caramel sauce and vanilla bean ice cream. The silky pudding was moist and packed with chocolate. The chocolate was evenly integrated in the pudding, making the dessert smooth and delicious. Yet, from time to time a big mouthful of chocolate would just set me back in my seat in awe. Further, the warmth of the pudding played nicely with the cold of the ice cream, with the caramel sauce tying it all together.

When I left the restaurant, the sun was long gone and night had settled on the river. The beauty of the location struck me again. Owners Leslie Palmer and Gary Kneski had been right: the stunning Columbia River is an ideal place for a wine bar. 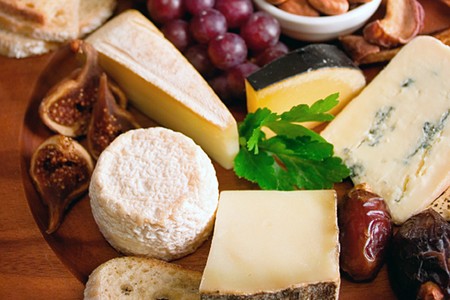 add cheddar or caramelized onions to any burger or sandwich 1. each