Corvette Diner celebrates the joyous 1950’s, with a menu of hearty comfort food that satisfies the soul as well as the stomach. The burgers, sandwiches, entrees, and daily specials range from time-honored to wildly inventive, like the unusually delicious “Rory” Burger, a hamburger topped with peanut butter and bacon that actually boasts a money-back guarantee. Its new Liberty Station location enhances the fun-loving atmosphere with a full bar, three distinctive dining rooms, and the massive Gamer's Garage arcade, making it easy for diners young and old to embrace their inner-child.

1950’s chic and kitsch is brilliantly captured in the recently relocated and revamped Corvette Diner, in Liberty Station. The prized throwback-themed restaurant now calls the once Officer’s Club of the Naval Training Center home, and boasts more than one advantage over its previous 22-year gig in Hillcrest. Visitors familiar with the old Hillcrest locale will immediately appreciate the new parking situation where parking spaces are plentiful, and free. Moreover, the diner itself has doubled in size, and offers numerous features catering specifically to families and large dining parties: three distinct dining spaces exude different characteristics of the iconic retro diner theme; a separate 5,500 square foot “Gamers’ Garage” provides an arena for kids and adults alike to test their luck at 50 time-tested arcade games; and two private dining rooms may be reserved for birthday parties and other festive events. Other nostalgic touches include a suitably authentic soda fountain and an energetic, quick-witted disc jockey spinning our favorite oldies-but-goodies.

Business suits and flip-flops are traded in at the Corvette Diner front door for poodle skirts and saddle shoes – in spirit, anyways. One cannot help but be seduced by the blaring old-time rock n’ roll, the equally loud and quirky décor, and the sprightly energy of the entire staff. Large black and white tiling throughout the main dining space is complemented by chrome accents in the furniture, a vibrant color palette of teals and pinks, and jukebox inspired tube-lighting that casts everything in a surreal hue of days-gone-by. Two more dining spaces sit to the right of the main room, and lie in complete contrast to one another. The first is a Day-Glo Mecca of sorts with black walls, black light fixtures, and an array of colorful radiating posters reminiscent of the Swinging Sixties. The second offshoot is a long and narrow area designed to resemble a dining car – high-gloss white walls and chrome accents provide a minimalist backsplash to highlight the series of inlaid video screens that grace each booth.

We enjoyed our blast-from-the-past dinner fairly early in the evening of our visit, and were not surprised by how quickly the tables filled around us. Excited to taste one of the more eccentric items of the menu and a couple fan-favorites, we placed our appetites in the hands of our capable and hip server, Flo, and prepared for a cookin’ good time.

Knowing that we were about to enjoy quite a spread, we opted not to order any of the Diner’s famous shakes or malts like the Banana-Rama and the Chocolate Ice Cream Soda. Instead, we committed ourselves fully to the grub that awaited us. To begin, we were served a large steaming plate of the Chili Cheez Waffle Fries. This supremely massive dish was immediately as appealing in sight as it was in aroma. Criss-cross waffle fries were lightly spiced and smothered in the Diner’s famous “Sting Ray Chili.” Melted cheddar cheese lay atop the chili, and a sprinkling of green onions finished off the entire dish. The chili was a rich and savory combination of ground beef, black beans, tomato, and seasoning, and was both hearty and welcoming. The waffle fries, crisp and warm, soon revealed why they are a superior choice to the usual julienne-cut variety in such a dish. The corrugated structure of the fries held the chili and cheese nicely, and their disk-like shape allowed for easy scooping. Strands of melting cheese added another degree of irresistibility to this already comforting appetizer, and I see why some may choose to order it as a hearty entrée.

The next dish to be devoured was one that has quite the reputation for being both strange and oddly wonderful. The Rory is a one-half pound natural Angus beef burger topped with bacon and peanut butter – yes, peanut butter. I am the first to admit that I was a pinch more than skeptical about this seemingly blasphemous combination, but two bites in and I was converted. A thin layer of diced lettuce and mayonnaise was spread under the juicy beef patty, and crisp strips of bacon rested on top of it. Over the bacon was a light dollop of smooth peanut butter softened by the heat of the meat. The result was a full-bodied bite that incorporated multiple textures and flavors. The soft bun gave way to the crunch of the bacon and the moist richness of the beef, while the peanut butter offered an underlying creamy base. Similarly, the slightly fatty and salty flavor of the bacon was balanced by the subtle sweet and saltiness of the peanut, and the two soon revealed themselves as the Frankie Avalon and Annette Funicello of condiments. As the menu so aptly notes, Elvis would love this burger; fortunately though, if you do not, you are covered by a money-back guarantee. Crisp skin-on French fries also accompanied the dish and were difficult to part with even after the meal was over.

The Meat Loaf is an established favorite on the Corvette Diner menu, and continues to live up to its reputation. Grand slices of it were served to us with an impressive helping of mashed potatoes and gravy, a honey wheat roll, and steamed carrots and broccoli. The meat was also topped with gravy, and enticed us with the rich and comforting scent of past childhood meals. Cutting into a slice exposed the tender and rich texture of the meat – fifteen ingredients compose the savory loaf; and while I’ll dare not pretend to be able to identify them all, Worcestershire sauce, hints of sweet carrot, and pepper each shown through nicely. The smooth and flavorful brown gravy graced both the meat and potatoes, and provided a bridge between the two with its subtle sweet and savory notes. The potatoes were coarsely mashed with some skin intact, which provided a comforting and hearty textural element that was balanced by a subtle flavor base of cream. The steamed vegetables, slightly crunchy and firm, mediated the more intense elements on the plate with their discreet refreshing aromas, and were tasty and welcomed additions. Also, the warm honey wheat roll’s yeasty composure and slightly sweet taste countered the pronounce heartiness of the dish.

The last entrée selection we tasted was the Diner Chicken Fried Steak. This heart-warming and palate-pleasing Southern specialty was made with tenderized lean beef, which was breaded in-house with buttermilk, and fried. Texas-style white gravy finished off the steak and also covered the mashed potatoes. Steamed vegetables and a honey wheat roll were also present. The white gravy has always been my favorite part of this specific dish, so I coordinated my first bite around a generous taste of it. Its eggshell color base was speckled here and there with flecks of pepper and spice that translated into a richly smooth and alluring essence. The lightly breaded outer layer of the steak was delightfully crunchy, retaining the tenderness of the steak, and the ever-so-subtle hint of buttermilk harmonized brilliantly with the flavor of the meat. Again the handsomely textured potatoes demanded their own share of attention, and revealed the finer facets of the gravy’s complex play on sweet and savory. So similar, yet so distinct, every component of the dish had a very important roll.

Dessert, anyone? If this had been any other night or any other meal, I would cower at the prospect of eating any more. Tonight, though, deserved to end on a proper sweet note, and the Ooey-Gooey Brownie Hot Fudge Sundae has the reputation for being a groovy good time. Sheer awe cannot describe our reaction to this jaw-dropping whopper of a sundae splayed before us. A Matterhorn-sized helping of vanilla ice cream was presented on a similarly colossal plate. Concealed beneath this pinnacle of confectionary goodness was a large dark chocolate brownie smothered in fudge and nuts. Digging through the ice cream to penetrate the decadent chocolate inside was oddly thrilling, and we took pleasure in the smallest accomplishment of making a dent in this mammoth dish. This ooey-gooey experiment in the melting arts would be a joy to share with everyone at the table – especially if there are at least six of you.

One meal at the Corvette Diner puts everything into perspective: Having fun and eating with revelry has its place in this world, and a little nostalgia can go a long way in brightening the future. With abounding smiles, rocking music, and kickin’ food, the Corvette Diner brings out the joy in children and the kid in adults. A neon sign hanging over the full bar says it best: “You Can’t Go To Heaven In A Sedan.” Surely, a venetian red corvette convertible is the proper sendoff.

Get two $50 gift cards ($100 total) for only $79.99. This exclusive offer is only available online through our website while the supply lasts. Only a limited number of gift cards are available at this discounted price. No rain-checks.
Price: $ 79.99
Adding to cart ... 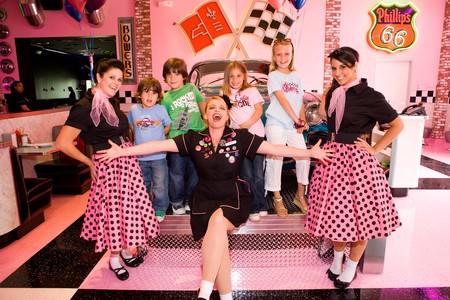 Is your restaurant appropriate for children?
Yes, the restaurant has an arcade and is available for birthday parties

CHOOSE YOUR BURGER: 1/2 lb. Natural Angus Beef, Housemade Black Bean Veggie, Fresh Lean Turkey. All burgers include skin-on fries / Jazz it up (instead of fries) with a side caesar salad, onion rings, or waffle fries for $1.99 / Big Daddy version of any burger-add $1.99

ages 10 and under $6.99 includes choice of french fries, steamed veggies, apple sauce, or carrots & ranch AND a regular fountain soda drink, pink lemonade or milk ADDITIONAL 25¢ for shirley temple or roy rogers ADD a milkshake: Classic $1.99, Deluxe $2.50 ADD a can of old fashioned Faygo Root Beer (it's caffeine-free and made with real cane sugar) to any kid's meal for just $1.99

served with natural cut fries. add a side salad or caesar for $1.99

$299.95 plus tax and mileage. Pick up times are from 11:00am-3:30pm. Availability is limited. Please book early. Seating for up to 6 additional guests may be reserved. Larger limos are available for an additional cost. Party times including limo: 2.5-3 hours.

The Ultimate "Shake it Up Baby" 495.00
Learn to "shake, rattle, and roll" just like our world famous Corvette Diner Dancers! Dress up in our 50's costumes or in your own. Learn some of our dancers' famous moves and perform your dance to our other guests. $495 for up to 20 kids ($15/pp each additional child - max 30 kids)

Hair Flair Party 425.00
Our famous Diner Divas will teach you the art of Straw Hair and Bouffants. You'll even do a craft of making your own barrette. Parade your hair flair around the Diner. $425 for up to 20 kids ($15/pp for each additional child - max 30 kids)

Magic in the Air 425.00
Abracadabra! Abracazoom! Let your imagination run wild with a 30 minute performance from our famous Corvette Magicians who will have you Oooohhhing and Aaaahhhing! $425 for up to 20 kids ($10/pp for each additional child - max 30 kids)

Music Makers and Shakers 395.00
You and your friends will do a musical craft, play some fun dancing games, and have your very own birthday musical parade through the the Diner. $395 for up to 20 kids ($15/pp for each additional child - max 30 kids)