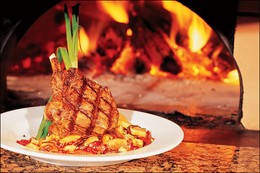 Executive Chef Todd Nash isn’t seeking culinary stardom.  He’s “not one of those chefs that wants to be on tv.,” but instead prefers to “let the food do the talking.” His food speaks volumes: drawing from a multitude of inspirations, including his mother’s home cooking, Chef Nash skillfully transforms American classics, with clever and innovative haute cuisine twists for his menu at Dakota Grill.  By emphasizing food that is “fresh and simple,” while still maintaining optimal sophistication and culinary artistry, Chef Nash manages to infuse the sometimes intimidating fine dining experience with the approachable ease of a family meal.  In doing so, Chef Nash allows his food to take center stage, unclouded by the shadow of bombastic culinary egos and pretention.

This commitment to bridging the gap between haute cuisine and home cooking began at an early age.  Chef Nash first learned to cook from his mother, whose cuisine remains his favorite.   Her influence was compounded by exposure to Julia Child and the “Galloping Gourmet,” Graham Kerr, who brought the fine art of French cuisine to the homes of Americans through their cooking shows and cookbooks.  Following their instructions, Chef Nash would experiment with different culinary techniques, trying them out on his family, and later his friends and classmates in college.  Years later, while at culinary school, Chef Nash had the pleasure of sitting next to his icon, Julia Child, while on a plane, who in conversation reinforced his own belief that “the food is the most important thing,” far more than fame and prestige.  Encouraged by the teachings of his culinary role models, both famous and familial, Chef Nash pursued a career in fine dining, a career that is shaped by tireless devotion to customer satisfaction through skillfully prepared food.

Born and raised in San Diego, Chef Nash is committed to enhancing his hometown’s dining culture.  His exposure to San Francisco’s long-established epicurean scene during his training at the California Culinary Academy motivates him to educate San Diego palates in the art of fine dining by making haute cuisine more accessible.  His resume reflects his devotion to San Diego gastronomy: he spent distinguished periods at Laurel and Bali Hai before taking his current position at Dakota Grill, where he has worked for the last six years elevating comfort food to the heights of sophistication.

While Chef Nash is committed to dependable quality, as a culinary artist he is also devoted to the pursuit of his own creative impulses.  Motivated by the pursuit of “the fresh,” Chef Nash allows the seasons to dictate many of the changes he makes to his dishes, making subtle changes due to what’s available and at its peak of flavor. The menu recently underwent an overhaul four months ago, with Chef Nash trading some long-standing dishes for new inspirations.  He also informs us that he is currently working on another menu change, promising new dishes and revitalized favorites  Although the general menu concept at Dakota Grill is American comfort food with a slight Southwestern influence, Chef Nash often sneaks in elements and cooking styles from his favorite cuisine:  French-Mediterranean.  By using ingredients like arugula, gruyere, and caper berries within the context of American comfort food, Chef Nash is able to both satisfy his own artistic vision while delivering a uniquely approachable dining experience to his guests.

Above all else, Chef Nash is dedicated to his customers. It is their enjoyment that motivates him to experiment with new techniques, and to maintain a meticulously precise degree of consistency at Dakota Grill. Although the hours of working as a chef can be grueling, the payoff of “putting smiles on people’s faces” makes it all worthwhile for him.  It is this steadfast sense of responsibility for customer satisfaction that distinguishes the Dakota Grill dining experience, an experience that deftly balances the sense of cachet imparted by sumptuous indulgence, with an inviting feeling of belonging and comfort.