Delirio's is a new addition to the La Jolla/Bird Rock area, bringing an elegant setting, bold cuisine, and a unique wine list to an unsuspecting location. Executive Chef Aaron La Monica's menu is peppered with fresh, local, and organic ingredients, which he skillfully and artfully weaves together into unique presentations that promise to delight the senses. His approach celebrates the best Southern California has to offer, in a style which he describes as "California Cuisine, Baja Flavors." Wine director Jerome Astolfi, who joins Delirio's from Jack's La Jolla, has created a worldly wine and beer list to perfectly accompany Chef La Monica's cuisine.

San Diego is a bountiful place to reside if you’re a restaurant.  The mild, Mediterranean-like climate offers a nearly year-round growing season, which sees over 200 agricultural products emerge from the soil of nearly 6,500 farms. As anyone who has visited an area farmers’ market knows, from springtime asparagus through winter squash, San Diegans are downright spoiled.

One might argue that you haven’t really dined in San Diego until you’ve tasted a meal of local produce, such as the fresh, seasonal, and often stunning offerings from Chino, Crows Pass, and La Milpa farms.  There are only a handful of restaurants that truly make an effort to source from these farms, including a relatively new kid on the block: Delirio’s.

Delirio’s Restaurant opened in the heart of La Jolla’s Bird Rock neighborhood in 2006, as a charming, intimate restaurant serving upscale Mexican-fusion cuisine. Yet within a year of opening, the restaurant changed course - and cuisine - joining the ranks of the select few restaurants that embrace the irresistible bounty of Southern California with open arms.

Motivated to celebrate the rich flavors of San Diego’s own terrain, Executive Chef Aaron La Monica has redefined Delirio’s cuisine, creating a seasonal, locally-focused menu of “California Cusine, Baja Flavors.”  He couldn’t be more qualified to do so, having worked under some of the most talented local-produce proponents in the city—Jason Knibb of Nine-Ten, Michael Stebner, formerly of Nine-Ten and Region, and Jeff Jackson of the Lodge at Torrey Pines. The culinary approaches of these chefs—all of who have strong relationships with local farmers, work with seasonal menus that celebrate the ripest produce, and focus on showcasing, rather than overshadowing, high quality ingredients—are instilled in La Monica, and are evident in his reinvention of the Delirio’s menu.

While the menu may have changed, the restaurant’s setting has not—it still offers a charming, serene space that seems more peaceful sanctuary than restaurant. White walls and exposed brick fade into the background, while custom art and delicate light structures offer a hint of color. Although just one room, the restaurant seems both roomy and intimate, a unique juxtaposition that makes it equally suited to a festive party as a romantic date. Its location and unassuming façade help keep the restaurant unpretentious, and in-the-know guests seem to share an unspoken reverence for this charming oasis.

Arriving early, we contemplated a drink on the outdoor patio but were graciously shown to our table despite our early arrival. Sommelier and Manager Jerome Astolfi eagerly greeted us, as did our server Josh. Perusing the one-page, seasonal menu, it took us little time to decide on the five-course “Trust the Chef” Tasting Menu with wine pairings. This prix-fixe option is offered daily, and at $55 ($75 with wine pairings), it may be one of the best deals in town.  Couples should especially consider the tasting menu, as the kitchen often sends out two different dishes for each course.

As the sensual voice of Sadé poured out of the speakers, Josh poured two glasses of Salomon Steinterrassen, a 2005 Austrian Riesling, to accompany what would prove a refreshing and vibrant introduction to La Monica’s cuisine. Our first two dishes both predominately featured produce I had seen—in their raw forms—at a farmers market earlier in the week. The Harissa Marinated Shrimp consisted of feisty prawns sitting atop a salad of snap peas, pickled ramps, blood oranges, and mint. The dish was a mélange of textures and colors—dark purple oranges, crisp, verdant beans, and pale, silky ramps—and each bite resonated with the freshness of just-picked produce. The shrimp, tender with a crunchy coating of spicy Harissa—a tomato-based sauce hailing from North Africa—were the perfect complement to this vibrant salad, offering a hint of the exotic alongside local flavor.

Accompanying the shrimp was “Nancy’s Ceviche,” which arrived in three small bowls containing house-made corn chips, sea bass ceviche, and avocado mousse. Seeming an upscale version of chips and dip, the dish was full of complex, elegant flavors. The ceviche, of course, was the highlight: sweet mango and papaya mingled with spicy chiles and cool tomato granita, resulting in a perfect blend of playful complexity. The avocado mousse offered a creamy compliment that soothed the underlying spice and each bite of a house-made tortilla chip topped with ceviche and mousse filled our mouths with flavor.

For our second course, Josh poured glasses of 2005 Frederic Magnien Pinot Noir from Burgundy. The wine was surprisingly substantial for a pinot, and would prove delightful with our next duo of dishes.  Just as with the ceviche, the House Made Chorizo suggested La Monica had a playful streak. The dish, a plump sausage link served with a basted egg and fava bean toast, looked like a traditional breakfast plate, playfully defying the evening hour. The thick chorizo sausage sat alongside a large sunny side up egg and two slices of toast. The sausage, smoky sweet with a lingering spice, was the highlight of the dish, although having crisp toast to soak up a deliciously runny egg yolk was a playful surprise. The fava bean spread, light green and slightly salty, was surprisingly delicious interpretation of another local gem.

We next moved from playful to elegant, with a gorgeous rendition of Duck Leg Confit. A plump duck leg rested on a bed of wilted romaine, accompanied by candied pecans and a brilliant chipotle vanilla sauce. My first exposure to the intoxicating combination of chipotle and vanilla had actually been at Delirio’s, when the restaurant first opened. I remember the sauce, a fetchingly subtle combination flavors, as the triumphant moment of the meal. Now, I happily discovered, the sauce was as bewitching as ever, yet it was not the best component of the plate. Never had I sampled duck cooked so perfectly, the thin skin a delicate crispness giving way to succulent, moist meat. La Monica’s execution—in composition, flavor, and preparation—proved flawless. It was a dish that disappeared way to quickly.

Josh delivered two different wines for our third and main course, for myself a 2003 Chateau Grand Bert, St Emilion Grand Cru, and for my date a 2004 Dutton Estate Chardonnay from the Russian River Valley. Both were shining examples of Sommelier Jerome Astolfi’s intuition, not only in compiling an intriguing and varied wine and beer list but in pairing his selections with La Monica’s cuisine.

The St Emillion proved an elegant companion to the Brandt Hangar Steak, which, sliced and fanned atop a bed of braised mustard greens, displayed both a blackened crust and pale pink center. The velvet-like steak was topped with Idaho morel mushrooms, pickled ramps, and chocolate cabernet sauce. The dish was a celebration of quality, pairing some of the country’s best beef—naturally raised from Brandt Beef—with one of the grandest of mushrooms, the wild morel. The two were near identical in texture, the mushrooms so meaty and the meat so tender they both hit the perfect level of savoriness. The mustard greens and pickled ramps offered a bitter counterpart, while the chocolate cabernet sauce elevated the dish from delightful to extraordinary. Yet for the second time I found an absolutely stunning combination—chocolate and cabernet—achieve great heights in a sauce only to be equally matched by the meat it accompanied. It was the hallmark of California Cuisine—while La Monica’s sauces were excellent, they were not overpowering, allowing the high quality of a dish’s ingredients to shine.

I turned to my date’s dish, the King Salmon. Served crisp skin side up, the salmon was both moist and flaky. The glistening fish rested atop a bed of new potato spears and green beans, which were tossed with horseradish cream and dill sauce. Three plump caper berries sat atop the salmon, promising a salty bite. The fish’s accompaniments evoked an elegant potato salad, yet with such vibrant, distinct flavors it was too fresh to be considered one.  Each component offered pronounced flavor—the pillowy potatoes, crisp green beans, biting horseradish, and unmistakable dill. The combination seemed both classic and inventive, and was nothing short of brilliant.

With our stomachs full and two courses to go—the portions had been surprisingly generous for a tasting menu—we were slightly worried we’d fill up before dessert. Yet worry faded to delight when we spied two slender plates, sparsely topped with delicate, distinct ingredients. A cheese course! The course was unexpected and all the more delicious for it. We found two unique and stunning cheeses set before us: a Spanish Cantalet, accompanied by pickled onions, red leaf lettuce, dates, and toasted macadamia nuts; and a French Fourme d’Ambert, served with balsamic glazed Crows Pass strawberries. Besides the imported cheeses, I was delighted to recognize all the components of both plates as local.

While the cheese course was a refreshing interlude, it was dessert that won us over. In many restaurants, dessert is an unfortunate sugary conclusion, an overly sweet end to an otherwise stunning meal. Here it was a true fifth course, with two flavorful dishes so complex and intriguing we ate to taste the flavors and to marvel at the composition, not to satisfy a sweet tooth.

The Mexican Pot de Crème arrived in a small cup and saucer, a rich blend of Mexican cocoa and Mexican chilies whipped into a mousse and topped with crème fraiche and strawberries. Each spoonful was an earthy marvel—the complex cocoa offered a hint of spice that suggested coffee more than chocolate.  The Tres Leches Cake arrived as a slender cylinder in a shallow bath of milk, caramelized pineapple, and a tamarind pineapple sauce. The entire dish tasted wet—the cake saturated with rich milk—and was the best rendition of Tres Leches cake I had come across yet.

With each spoonful of dessert I couldn’t help but smile—our last course offered a fitting conclusion in a restaurant that began as a celebration of Mexico only to be lured away by the bountiful produce of California. After a meal filled with gorgeous preparations of seasonal California produce, dessert seemed a nod to—and an unwillingness to completely let go of—the bewitching but far-away flavors of Mexico. Remembering its culinary roots yet embracing its location’s riches, Delirio’s has, perhaps unknowingly, become the ultimate embodiment of Southern California Cuisine. 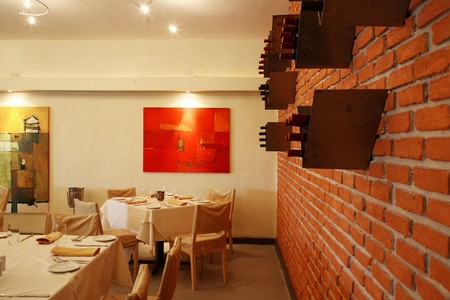