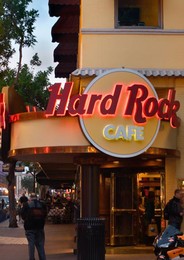 The Hard Rock Café is one of the rare places where employees have no ban on self expression. Every server, hostess, and chef is free to express their unique personality, be it through hair color, piercing, or tattoos. This lack of restriction was one of the main draws for Karissa Decker, kitchen manager of the Hard Rock Café in San Diego. She describes herself as a “total rocker chick” and was originally drawn to the restaurant because they didn’t require that she take out her lip ring. Although she has only been at the San Diego location for a short while, she describes the atmosphere as being almost like a family.

Originally from Wisconsin, Chef Decker’s affection for the Hard Rock Café began as a young girl when her mother would bring back souvenirs from the different cafes that she had visited in her travels. In her college days, Chef Decker studied nutrition but took elective courses in cooking and food because she truly enjoyed it. She eventually found her place as a server in the Hard Rock Café but kept being pulled into the kitchen because of her skill. Although she confesses that she never thought she’d be a kitchen manager, she loves the environment in which she works. She has traveled all over the world working for different Hard Rock Cafes before finally settling down in San Diego—a city that she admits has greatly impacted the way she cooks. Her appreciation for spicy Mexican food has been heightened, resulting in a new bar menu that features small bites with a southwestern kick.

With so much memorabilia surrounding her, it is only natural that she has a favorite piece: the double necked guitar once owned by Jimmy Page. This piece is particularly appealing to her because she grew up on his music. When asked what her three favorite rock bands were, she responded Guns and Roses, Pantera, and Queen. While it is rare for someone to find a place that fits them so perfectly, it is clear that Karissa Decker has beaten the odds and found a home at the Hard Rock Café.