La Fiesta is a Mexican restaurant located in the heart of the Gaslamp. Just a few blocks away from the MTS trolley station it is an easy commute, and well worth the trip. Patrons can find themselves in a relaxed setting that is acceptable for all ages. The decoration involves both an elegant dining setting and a more casual area that includes a full bar. The margaritas are big hits so it is a great place to come for a drink after work with. All the food is served fresh and original as Chef Raul Degadillo puts a San Diego spin on traditional dishes. Enter hungry and leave full. They even have DJs spinning a mix of Salsa, Reggaeton, and Top 40 from Thursday to Saturday.

Devouring The Flavors Of Mexican Fiestas

I was pretty excited to enjoy the festivities of the San Diego La Fiesta Mexican and Seafood restaurant. Even though it was located in the hectic downtown area, it sounded more than worth the trip. Fortunately, La Fiesta is located in the Gaslamp District, which connects directly to an easily accessible MTS trolley. So the driving hassle is no impediment. The trolley commute is only a half hour trip from the Fashion Valley mall, where parking is free and a whole round trip is an easily affordable five dollars compared to the metered parking in downtown that could add up to just as much, or more. Once dropped off at the Gaslamp, I made my way up the bustling streets for about five blocks, passing other restaurants and bars, until I reached La Fiesta.

The restaurant itself is conjoined with a bar and several other buildings on the same block that are architecturally similar. However, it is easily distinguishable due to the crossed maracas logo hanging over the door and the warm, almost homey setting that can be seen from the entrance. I was given the choice to sit outside- which was right next to the sidewalk and, though it involved dealing with the lulling hum of passing traffic, seemed the ideal place for private dining as most of the tables were elegantly arranged for two. Large water glasses that sat across wooden tables had drink menus directly in the center, held up aesthetically by the glasses. The only thing that separated the diners from the rest of the world was the elegant metal railing that stretched across the entire patio.

When my friend arrived we were taken inside and shown to our table. There was hardly anyone else inside, save for one person sitting at the nearby bar that stood under wooden villa-like architecture. But, from the looks of things, the restaurant was decked out in the flavors of Mexico, which involved bright colors and gaucho statues. On the east side from where I had entered from, one could see out towards the busy world around them.The bar was only a few steps away and spanned to the entrance; not being one to drink alcohol much, I figured I wouldn’t be making that many orders from it. The interesting thing was that directly north, across from my seat, a whole new bar-restaurant hybrid was waiting called The Ocean Room, separated only by a few tables and windows and green curtained doors; some of the windows were covered in a wavy, ocean glass pattern and some were just open.

Towards the west were the bathrooms- easily recognizable by their gender logos- and beyond them, a view directly into the kitchen where the chefs could be seen hard at work. The Master Chef, Raul Degadillo, was hidden away adding his creativity to make up the unique dishes that I would be dining on that night. Behind my seat was a doorway that led towards a more intimate dining setting that was more elegant in the manner that it featured more plants hanging from the wall, several faux fountains, and different tables and seating. Everything was more one-on-one and personal as far as space was concerned. Even with the room completely empty, it still looked full with the proximity of the furniture. Despite the classy look, I still preferred the casual atmosphere of the room with the bar. Lights hung directly overhead in modern, metal pots with holes on the copper cast, allowing light to spill in from the sides. Large fans hovered next to them, and though they were not in service, looked more than adequateto keep patrons cool on a hot and humid day. Several blackened pots and pans hung on a red brick wall, illustrating the point of a homey, welcoming atmosphere. This idea of hominess was also illustrated by the combined actions of the restaurant staff. The General Manager served as a chef and server, along with his usual informant role to customers, while the waiters were constantly bringing out food and taking it away.

My friend and I were seated at wooden tables similar like the ones I had seen outside, except they were pushed together to fit four instead of two. Most of the indoor table arrangements were like this, though along the wall with the wave windows there were several booth seats. Upon the table waited a complimentary basket of corn tortilla chips, a bowl of red salsa (that had a kick to it after I had a few bites), and rubber place mats, along with salt and pepper for extra seasoning. Christian, the General Manager, caught up with us and described what he had planned and started us off with some appetizers and drinks. My friend had a huge house margarita and I just had some chilled plain water with smooth, clear ice cubes. The margarita looked delicious with just the right amount of salt on the edge; La Fiesta obviously prided themselves on their margaritas considering there was a large statue of a man in sombrero with a huge margarita glass in his hand.

The first appetizer to come out was the stuffed Toritos. Each chili was cooked to a yellow crisp crunch with cheese on the inside. There were also shredded carrots and sprigs of parsley in the middle that could be mixed in with the cheese once the chili was cut open. What really made the Toritos special in La Fiesta style was the additional soy sauce and sesame seed dip that added an extra, spicy kick to the flavor. The chilies were stuffed with jumbo shrimp and crab bits mixed within the cheese, which offered a hearty balance of seafood to this Mexican favorite.

Our server Jorge frequently came by to check on our drink situation while keeping me refreshed with water and asking about the food. Christian came back out with the “House” Sampler when I had barely started with the Tostitos, ranging from taquitos to decadent nachos. The nachos were heaped in black olives, lettuce, fresh guacamole, cheese, cilantro, carne asada, and sour cream. There was even Queso Fundido that hardened a bit faster than anticipated, but I found plenty of use for it to be added on the fresh corn tortillas that were provided to help with any ‘leftovers.’ The addition of the guacamole really helped make the impromptu taco melt in one’s mouth. There was plenty left over to mix with the cheese and chicken quesadilla which seemed so eager to be eaten.A mix of the taquito lettuce, the nacho guacamole, and some of the Torito soy sauce added more than enough flavor to make these scrumptious appetizers mind blowing.

At about this point La Fiesta began to fill up; the bar was still relatively empty but a whole group of casually dressed co-workers took the booth across from us up and began chatting and laughing over drinks. A small family took the dual-joined table behind us and two close friends sipped beers while talking quietly just one table away. The restaurant began to feel more lively and less like a stage where we could easily be observed and had to show off eating habits. Our server, Jorge, brought out two bowls of Albondigas Soup, rich with a tomato-vegetable based broth and one large, spicy meatball for substance. The celery and other vegetables were very crisp and the corn and rice were an excellent addition. The meatball was about half the size of the bowl and took up most of the broth as far as flavor went, but I could still taste the spice and salt that make this piece of meat so delicious. The soup also included a Spinach Salad, full of large green leaves and crunchy walnuts mixed with a mint vinaigrette sauce that almost overtook all the flavor of the extra bacon, which had a smoky crunch to it. The salad included the unique addition of sliced pears, which added an extra level of sweetness to the salad.

Christian came out with the main courses just after I finished my soup, and both looked amazing. One was a whole seafood array dubbed Molcajete Cancun, sitting in a bowl made of volcanic rock (called a Molcajete) with a giant prawn looking ‘deliciously relaxed’ on top in the still bubbling sauce. Not wanting to torch our taste buds, Taylor and I took a stab at the Chamorro de Poco, which was a huge shank of pork that lifted right off the bone with ease and was doused in Salsa Pasilla. This special sauce had a tangy, smoky flavor to it that suited the meat well and - when mixed with the creamy black beans, fried rice, bananas, and a soft tortilla - created the hit flavor of the night. Bananas were a very creative liberty that would make their appearance more than once that night.

We still had to wait a bit for the Molcajete Cancun to chill, but once it looked cool enough I dove right into it. First I hooked a jumbo shrimp -which was fresh and had a spicy kick - from the roasted red pepper sauce. The sauce had a bit of a tomato flavor so it tasted like salsa, but with a thicker texture. Anything it touched was granted a succulent taste. The mussels and clams both tasted about the same with such a direct flavor it felt like tasting a bite out of the ocean itself. White fish and crab were mixed in, and once I dug deep enough, sliced octopus was slathered in sauce and offered a unique texture that stayed with my taste buds for some time. The giant prawn was the king of the pick as I mixed it with the panela cheese to create a silky texture that just melts in your mouth.

By this point Taylor and I were exhaustively full, but we couldn’t pass up dessert, which made a liberal use of fried bananas mixed with rum and mango sauce, vanilla ice cream, and a red dressing that drizzled down across the top. I made quite a mess out of the whole thing, but there were cinnamon sprinkled chips to dip into the left over whip cream. This had to be one of the best desserts I had ever enjoyed. Full and satisfied I walked into the night, with the taste of cherry rum still on tongue and the smell of pork still in my nostrils. The Gaslamp is lucky to have La Fiesta grace its sidewalks with unique flavors and great cooking minds. I’ll certainly return one day. 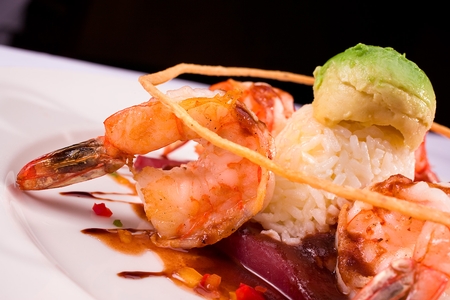 Saturday-Sunday: 9:00am-2:00pm. This is a sample menu only. Prices and availability may be subject to change.

Monday-Sunday: 11:00am-Midnight. This is a sample menu only. Prices and availability may be subject to change.

Served with fries and pickled carrots

Monday-Sunday: 11:00am-6:00pm. This is a sample menu only. Prices and availability may be subject to change.

Monday-Sunday: 11:00am-Midnight. This is a sample menu only. Prices and availability may be subject to change.

Served in soft corn tortillas with rice and beans