In the mood for a night of great food, conversation, drinks, and relaxation amidst the hustle and bustle of Downtown San Diego? Come enjoy an evening at Osetra at the corner of 5th Avenue and E Street. Their menu portrays some of the finest culinary creativity of today’s restaurant scene. Osetra hosts a happy hour six days a week, has an extensive award-winning wine list, and offers banquet facilities to help plan any special event you have in mind. Cocktails are savvy, hip, sophisticated, and hand crafted. The restaurant’s ambiance is romantic and cozy, yet maintains a trendy city hotspot feel. Take your taste buds on a culinary adventure of masterpieces at San Diego’s Osetra.

Situated in the heart of Downtown San Diego’s Gaslamp Quarter, at the corner of Fifth Avenue and E Street, is Osetra.  With a nod to the highest quality caviar in its name, Osetra stands as the epitome of premier seafood.  The menu showcases rich imaginative flavors that maintain an air of simple sophistication.  Osetra’s ambiance is quiet and intimate, and feels like a getaway in the middle of the city.  This downtown landmark was established in 2003, and brings the upscale chic trendiness of the Manhattan and Vegas restaurant scenes to San Diego.

My guest and I arrived at Osetra on a cool Tuesday evening and were immediately greeted by the restaurant’s general manager Sara Arjmand, who promptly introduced herself and escorted us inside to see the wine tower and its angels who “fly” about the 3-story structure retrieving bottles for the restaurant’s guests. She also took us on a tour of the main dining room and the bar.  Since the bar was still hosting happy hour, my guest decided to order Osetra’s signature cocktail, The Fire Breathing Dragon, while I opted for a cool glass of their Non- Vintage Gruet Rose Champagne from New Mexico.  The Fire Breathing Dragon cocktail is hand crafted with Habanero -citrus infused Seagram Vodka, shaken with fresh orange juice, a dash of triple sec, and then served in a uniquely shaped glass.   This drink is loaded with flavor, spice, and innovation. The heat of the Habanero is balanced by the citrus of the orange juice and the overall cool temperature of the drink.   Guests are in for a treat as they wind up and taste both hot and cold in one sip. My champagne was a beautiful rosy pink, crisp and bubbly with a clean finish. It was served in a chilled flute and paired well with each of my courses.

Shortly after admiring the restaurant’s décor with a color palette of the sea, which had dark cherry hardwood flooring with white linens and chair backings, we stood in awe the wine tower which holds the restaurant’s 5000 bottle wine collection. . Sara then escorted us to our table on the outdoor/ street front patio lined with ceiling heaters and tables covered in yellow and cream colored linens that were topped with flatware, flowers, and candles.  Our server, Judy, came by with freshly baked bread that is made in-house daily and reminiscent of a home kitchen to ready our palates for the culinary adventure that was about to begin. Osetra’s menu features much variety and offers contemporary twists on classic dishes as well as a slew of signature creations that capture the spirit of world travels.

Our plunge into Osetra’s modern European, Asian, and American fusion-based cuisine began with their Seafood Napoleon. Boldly colored layers of lump crab, spicy tuna, and guacamole are stacked in a cylindrical fashion, drizzled with wasabi oil, and topped with a dollop of caviar. The spices infused into the tuna complemented the smooth texture and buttery flavor of the avocado, accompanied by the meaty and sweet tones of the crab.  The garlic crostini served alongside the Seafood Napoleon added a new level of complexity to this simple, clean, and already zesty plate.  Just as we saw earlier with the Fire Breathing Dragon cocktail, the coolness in temperature of this dish was nicely juxtaposed against the heat of its seasonings.

The next appetizer we sampled was Osetra’s signature Tempura Mexican Shrimp. The shrimp was cooked tempura style and served over a watercress salad, with a crisp flattened wonton garnished with mango chutney.  This dish exemplifies the meeting of East and West, as Asian and Southwestern flavors combine.  The shrimp were fresh, well cooked, and tender with an additional crunch from their tempura coating.  The watercress salad, which sat beneath the layers of prawns and mango chutney, was refreshing with its colorful spring mix of greens and red and yellow pepper strips covered in a creamy dressing.  The mango chutney contributed a citrus zing that tied the entire dish together. Osetra’s Tempura Mexican Shrimp is a fantastic starter for your meal, and its decorative structure wherein one can see all the ingredients used crates an astonishing presentation and feel.

Following these plates, my guest and I enjoyed the Spinach Salad consisting of organic baby spinach, strawberries, red onions, crispy bacon, and gorgonzola cheese with raspberry vinaigrette.  The salad was presented simplistically in a white ceramic bowl, and was a light transition into our main courses. The bacon’s smokiness simultaneously countered and enriched the gorgonzola’s creaminess and the sweet coolness of the strawberries.  In fact, the strawberry chunks along with the raspberry vinaigrette were a fun and unexpected twist to this classic salad.  In one bite, we tasted something sweet, savory, smoky, crunchy, and creamy-- a unique ability for a single platter.

Next, we moved on to our pasta course, during which we were treated to a warm comforting bowl of Lamb Fettuccine that felt like home.  The dish is prepared with in-house-made fettuccine noodles and lamb, green olives, mushrooms, and fresh mint. The ingredients are then dressed in a light red wine sauce that unites and enhances this menu item’s distinct and most subtle flavor notes. It was a rather developed dish reminiscent of the Italian countryside on a winter’s day.  This pasta dish, served to us Tapas style, managed to be both gourmet and homey in one bite.  The saltiness of the green olives mixed with the meatiness of the mushrooms, the coolness of the mint, and  strips of lamb bathed in a red wine sauce, The Lamb Fettuccine was hearty, rustic, and simply warmed our hearts.

Our hearts grew warmer still when our seafood entrees arrived.  Seeing as Osetra is known for their seafood, I happily indulged in the Yellow Tail while my guest’s taste buds were pampered by the Mahi Mahi.  Osetra’s Yellow Tail is sesame seed encrusted, pan seared, and finished with a soy sauce reduction and wasabi that sits atop sautéed shoestring carrots and bokchoy. The dish was presented in a vertically stacked tower held together by two long wonton strips stuck through the center like wooden dowel support rods.  The thick cut of Yellow Tail was seared just beyond rare so the fish was still pink in the center. It had the texture and tenderness of a medium rare cooked steak with an additional sweetness from the soy sauce reduction and sautéed vegetables. The sesame seeds coating the yellow tail’s exterior provided a toasted nut aroma and caused a synergy between the dish’s ingredients.

Both the Yellow Tail and Mahi Mahi entrees conveyed a high level of care, respect, love, and passion for food.  They exhibited a harmony of flavor, texture, color, and presentation.  Each was as simple as it was complex. Nutty, sweet, creamy, citrus, and aromatic notes combined to provide exceptional balance.  The colors were vibrant, fresh, and inviting, welcoming the diner to the dish sitting before them.

As our meal began to draw to a close, we looked over a dessert menu and settled on Osetra’s Gelato of the Day, we chose Pistachio, and their signature Pear and Cranberry Tart.  The pistachio gelato was presented in a cocktail glass with pistachio nuts mixed in topped with fresh strawberry chunks and a sprig of mint.  The gelato was a cool, creamy, and delicious way to bring our extravagant meal to a close.

The Pear Cranberry Tart, served on a square plate, was a sourdough tart filled with apricot jam, amaretto, almonds, and dried cranberries, and topped with pear halves.  This tart is an Osetra original recipe, and it was displayed with mint, quartered strawberries, drizzled chocolate, and powdered sugar.  It was rich, but not heavy.  Instead, it had an airy quality in texture reminiscent of toasted shortbread infused with notes of fruit and cinnamon.

Overall, our experience was nothing short of spectacular.  Parking was easily found in Horton Plaza’s structure off of 4th Avenue wherein ticket validation machines can be found.  Street parking is more difficult, though it does exist. There are also several valet and park and pay lots located in the surrounding areas.  The staff was friendly, welcoming, and attentive.  Osetra is a fantastic venue to host a banquet, anniversary, rehearsal, business dinner, or simply a romantic date.  The restaurant’s ambiance is elegant, classy, and enchanting with soft jazz music in the background.  It truly captures the spirits of Sin City and The Big Apple with a Southern California and West Coast twist.  Come check out Osetra and entertain your senses with invigorating and innovative flavors that entice your senses, pique your curiosity, and leave you happily satisfied. But be ready to try another masterwork of creative culinary genius, constructed by Chef Vincenzo Lo Verso and his staff. 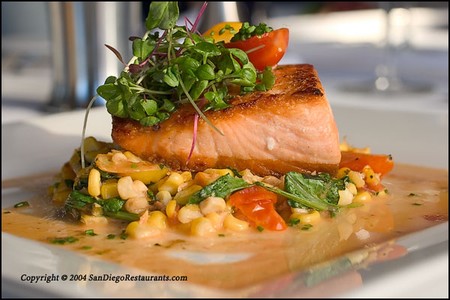 How far is your restaurant from the Convention Center?
The restaurant is .9 miles away from the San Diego Convention Center, which is about a 4 minute drive or a 13 minute walk.
Who is your Executive Chef?
Alberto Morreale
What is included in happy hour?
Osetra Watergrill offers happy hour Sunday-Friday from 5:00pm-7:00pm, which includes 50% Chilled Bar and appetizers, as well as $1 Fresh Daily Oysters, $2 Beer Battered Fries, $3 Draft Beers, $4 Well Spirits, $5 House Wine, and $7 Organic Martinis.
Are reservations required to dine at Osetra Watergrill?
No, but reservations are always recommended.
How do you access the wine bottles that are kept in your 3-story wine tower?
The wine bottles are retrieved by "wine angels" that are hoisted up the tower.
Where is the best place to park?
There are quite a few recommendations for parking: there is valet parking available in front of both the Wyndom Hotel and the Gaslamp Plaza Suites, Horton Plaza offers 3 free hours of parking with validation inside the mall before 9pm, and there is a parking lot located on 5th and E.
Is this restaurant wheelchair accessible?
Yes, Osetra Watergrill is wheelchair accessible.
What is the seating capacity of the entire restaurant?
Osetra Watergrill can accommodate up to 250 guests.

Monday-Sunday: 4:30pm-7:00pm. This is a sample menu only. Prices and availability may be subject to change.

Monday-Sunday: 4:30pm-10:00pm. This is a sample menu only. Prices and availability may be subject to change.

Monday-Sunday at the Chilled Bar. This is a sample menu only. Prices and availability may be subject to change.