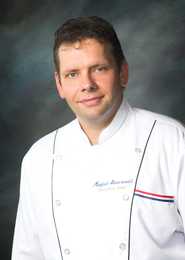 Over the past 20 years, this seasoned culinary expert has established a history of catering to varying clientele, stars included. From Tiger Woods to Tina Turner, diners accustomed to the highest quality of cuisine have frequented Chef Steuerwald’s kitchens, including his most recent at the Grand Hyatt Kauai Resort and Spa.

Prior to joining Hyatt, Chef Steuerwald held numerous culinary positions in restaurants and hotels in Germany, South West Africa, the Caribbean and New York, as well as on a luxury cruise line, the Royal Viking. During his career, he has worked with such world-renowned chefs as Chef Paul Bocuse in France, Chef Daniel Boulud in New York and Chef Jeremiah Towers in San Francisco.

Over the years, Chef Steuerwald has been actively involved in numerous culinary organizations and has served as the president of the Cayman Culinary Society, director of the Caribbean Culinary Federation, and as a member of the South African National Cooking Delegation. Originally from Austria, Chef Steuerwald began his culinary career at the age of 15 as an apprentice at the Hotel Tulbingerkogel in Vienna.