Directly across the street from Petco Park, The Dragon’s Den is the East Village’s answer to reasonably priced, quality Asian cuisine and sushi. Relax on The Dragon’s Den patio in any of their comfy upholstered chairs as you enjoy the outdoor fire pit and prime views of the ballpark. Inside, a warm color palette of earth tones provides a sophisticated backdrop for original design pieces to shine. The restaurant’s stand-alone raw bar features a number of traditional Japanese sushi favorites, while the full service drink bar showcases original cocktails, craft beers, and fine sakes. Their weekday happy hour specials are some of the best around, and their lunch menu satisfies both the appetite and budget. Enter the Dragon’s Den and see for yourself what tasty riches await you.

Dining in The Dragon's Den

The Dragon’s Den dining experience is unlike any other Downtown restaurant, set apart by category and excellence. Placing a modern twist on traditional dishes, The Dragon’s Den continues to make a mark with its unique oriental cuisine and dynamic ambiance. The ability to mix various Asian cuisines makes this restaurant an exciting alternative to the typical sushi restaurant.

Upon approaching the restaurant we are greeted by a smiling hostess who guides us to our table. Televisions mounted on the walls are playing sports games as basketball and baseball fans fix their eyes on the screens and sip their drinks.

Nestled between the various buildings and crowded streets of Downtown San Diego, its slightly elusive location greatly contrasts its bold menu– a brave collection of resounding flavors that are sure to keep your taste buds contented.The Dragon’s Den dining experience is unlike any other downtown restaurant, set apart by category and excellence.

Upon approaching the restaurant we are greeted by a smiling hostess who guides us to our table. Televisions mounted on walls above the bar and around the restaurant are playing sports games as basketball and baseball fans fix their eyes on the screens and sip their drinks. Smiling bartenders nod to us as we continue to the main dining room.

The bar is a great place to catch up with friends or just relax and enjoy company. Minimalist lighting highlights the warm red tones around the bar area achieving a modern and chic downtown look while the  televisions broadcast the latest happenings at Petco Park making it a great place to grab a drink and relax.

The Drink Menu is a broad selection of wines like Crème De Lys Chardonnay from Central California, or Tobin James Titan Hill, a Mediterranean red wine blend of Syrah and Zinfandel from the heart of California’s Central Coast.  Sakes and regular and organic bottled beers like Samuel Smith’s Apple Cider also make an appearance on the drink menu, while Green’s Amber Ale is an all organic gluten-free alternative. Sakes like Gekkeikan’s Haiku Black and Gold Sake can be enjoyed both chilled and warmed or consider the Gekkeikan’s Zipang Sparkling Sake which can be enjoyed crisp and cold on a warm summer night.

With selections of their Noodles, Rice, Sushi, and Traditional Japanese Entrées, the Lunch Menu offers dishes like The Cashew Chicken with Plum Sauce or the Dragon’s Den Fried Rice which both come with a choice of salad or vegetable egg roll, brown or white rice, and soft drink.

Complete with a fully stocked sushi bar and family-style seating, the main dining room is filled with rich reds and oranges that reflect the sweet and spicy fusion style dishes. The dark wood furniture and decorative oriental décor complement some of the slat stone walls. The Moroccan-style metal lamps, which hang from the ceiling and drape over our table, complement the soothing colors that are strewn across the restaurant’s walls. Natural light filters in through the large windows that seem to be a portal to view the beautiful patio seating complete with heat lamps and blazing fire pits– it’s even dog-friendly.

The restaurant seems small at first glance – that is until you see the bar and main dining room. The patio, being one of the restaurant’s more unique features, is complete with couches topped with cushy red pillows seemingly fit for royalty and water bowls for the canine customers. Just steps from the main dining room, the sushi bar also seems to be teeming with creative processes as the chefs meticulously work to create flavorful sushi rolls. The dining area offers a change of pace from the bar area with a more quiet and relaxing feel, perfect for a family dinner, date, or even for booking a larger private-party event.

Before we try our first dish we are kindly greeted by Restaurant Partner and accomplished Chef Michael Lou. Born in Hong Kong and raised in England, Michael Lou is a learned and experienced restaurant executive who understands the dynamics of a restaurant as well as the need for modernity and range in cuisine making his first sushi selection for our table particularly exciting. Michael grew up observing the traditional style of cooking from his father and the contemporary aspects of his uncle’s cooking. This fusion of style is translated into the first sushi selection he presents to us. Neatly placed on a white dinner plate adorned with ginger and wasabi, the Seafood Blossom is a spectrum of colors that will soothe your sights and appease your hunger. The dish comes complete with tuna, yellowtail, salmon, and avocado wrapped in soy paper. The first bite tastes just as colorful and collective as its appearance – bursting with flavor from the buttery-tasting salmon, meaty tuna, and smooth yellowtail. I savor each bite with delight as I wait for the next dish.

The Ronny Roll, named after Operating Partner and General Manager Ronny Tompot, is just about as well-rounded and accomplished as the man it’s named after. Topped with avocado and stuffed with cucumber, spicy crab, avocado, shrimp, and then drizzled with spicy mayo, The Ronny Roll takes something delicious from everyone’s favorite sushi roll and combines them into one. As I take the first bite, a burst of crunchy cucumber counters the creamy texture of the avocado that adorns it. The shrimp and soft rice meets the spicy crab in an unlikely unison of fiery-bold but smooth flavors.

Native only to the Dragon’s Den, the restaurant also offers a specialty roll called the Dragon’s Den Roll, a nicely-sized shrimp tempura roll topped with spicy tuna, filled with crunchy tempura, and drizzled in sweet eel sauce. Placing crunchy shrimp tempura with soft and spicy tuna is yet another example of this restaurant’s inventive style, and although merging sweet and spicy together may seem like a commonality in many foods, the sushi chefs at The Dragon’s Den take it to the next level by experimenting with both textures and flavors. The soft texture of the tuna contrasts with its spicy taste but is quickly soothed with the smooth taste of the sweet eel sauce. The soft rice creates the perfect backdrop for the crunchy shrimp tempura.

Our first dumpling dish is the traditional Boiled Pork and Chive dish. The dumplings are gently placed over a bed of soft baby lettuce leaves. And unlike Southern-style dumplings you might find at an Asian chain restaurant, the dough covering of these dumplings is thicker than most as it is rice based instead of flour based. Michael explains that because the Southern areas of China produce more flour and the North produces more rice, the dumplings differ between regions. The center is filled with light and tender minced pork and crunchy chives that seem to melt in your mouth. The crisp of the slightly browned shell mingles with the dumpling’s soft, doughy attributes as I bite into the meaty center. To spice things up just a bit this dish also comes with a spicy soy dumpling sauce made with a crushed red pepper base to add a little danger to your dumpling.

Even more daring and original is the Stuffed Jalapeño Pork dish that Michael brings out for us next, consisting of jalapeños stuffed with moist minced pork. Hesitant at first to begin indulging in such a spicy food, I am relieved when Michael explains further that the seeds are removed from the peppers to take away the unbearable hotness without removing the fiery flavor. The peppers still maintain a bit of a crunch to them as to distinguish themselves from the soft pork. Next they are stuffed with the pork meat and cooked to perfection. To top off these zesty morsels the peppers are covered in an Asian curry sauce with a garlic ginger base, leaving a sweet, lingering, spicy aroma. The peppers also come with bok choy to balance out this hot and tangy fusion. But this jalapeño dish isn’t the only thing bringing the heat to The Dragon’s Den.

The Toasted Sesame-Crusted Seared Ahi Salad is a favorite of the restaurant and its patrons – a combination of flavor and texture that is about as pleasing to the palate as it is to the eye. The Ahi tuna is drizzled in a thick wasabi aioli and crunchy roasted sesame seeds, creating a cool contrast between the wasabi and flavorful tuna. The tuna itself seems to be seared just enough to bring out the cool but meaty flavor of the fish. The tuna is accompanied by a lush spring salad – and drizzled with a sweet gourmet vinaigrette that tops the buttery lettuce. The smooth dressing is a great addition to the crunchy salad with hints of ginger and garlic that linger in the air throughout the meal. The wasabi aioli holds the flavor and hotness of regular wasabi but without the aggressive spiciness that often accompanies it. This creamy aioli mixes nicely with the contrasting textures of the crunchy sesame seeds and cool salad.

The last dish Michael brings to our table is striking in both color and flavor. The juicy red pepper brings with it a striking sweet and roasted flavor, while still maintaining a little crunchiness. And despite being on the Small Bites menu, it is big in flavor. The roasted red peppers are packed with a thick and creamy blended tuna and mayo mix that is delicately topped with salty capers that combine with the crunch of the red peppers. Like the Ahi Tuna plate, it comes with a spring salad.  One of Michael Lou’s proud creations, the Roasted Red Pepper Tuna Wrap is a perfect addition to any of The Dragon’s Den entrées.

The Dragon’s Den offers a broad assortment of exciting Asian-Fusion and traditional dishes that can accommodate almost any dining preference with a mix of flavors and a variety of textures. One of the more unique dining destinations in Downtown San Diego, The Dragon’s Den is a place where traditional Asian cuisine meets innovative modern-day eloquence.

The Dragon’s Den is a great place to be before, during, or even after a Padres game.  But try and arrive a little earlier since traffic in Downtown San Diego can be hectic, especially on game days.  Arriving early will also ensure better parking. Once you’ve parked you can enjoy The Dragon’s Den “Game Day Specials” like chicken and vegetable eggrolls. The restaurant also offers a notable happy hour that includes $4.00 off all signature drinks, $5 house wines, and specialty drinks like the Yin and Yang Mangosteen Mojito: an exclusive blend of juice from the Southeast Asia with 10 Cane Rum, mint leaves fresh lime and a little soda. 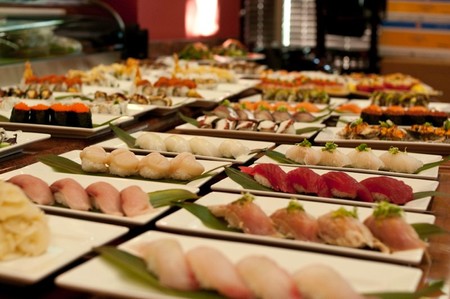 Choose any of the following Noodle or Rice Dishes

Served with your choice of a side salad or vegetable egg roll and soft drink.

Choose any of the following Entrée Combinations

Served with your choice of a side salad or vegetable egg roll, brown or white rice and soft drink.

Served with your choice of steamed white or brown rice

From the Sushi Bar

Daily Chef Special: Tell us what you want, we’ll make it to order! (Market Price

Come watch the Padres play and enjoy our game day specials during the game!