For centuries, the lighthouse has been a symbol of comfort and safety to mariners on the high seas. It is therefore quite appropriate that this long-standing landmark at the tip of Harbor Island serves much the same purpose today.

In addition to being a fine restaurant, Tom Ham's Lighthouse is exactly that. Because of its strategic location, it is also an officially recognized navigational beacon on NOAA marine charts produced by the National Oceanic & Atmospheric Administration.

Once guests enter the upstairs dining room, however, their eyes will feast upon one of the most breathtaking views that our city's downtown skyline has to offer, particularly in the evening. But this is only the first of the many indulgences that will ultimately tempt them during their visit. Manager, David Wilson, is an accomplished host with an ability to inspire the very best performance from his employees.

After my guest and I were seated, our gracious server, Victor Santana, brought us a couple of the best cocktails in the house; smooth 'Gold Cadillac' margaritas, made with Grand Marnier and Jose Cuervo Especial. They helped to further enhance our already magnificent bayside vista.

Our salads were delightfully fresh and crisp. My spinach salad was a masterful rendition of the classic recipe; with warm bacon dressing in a crispy baked Parmesan basket that was good to the last crunch. My guest savored every bite of her Granny Smith apple salad with garden-fresh micro greens, walnuts, crumbled blue cheese and a brilliantly achieved apple dressing.

After our plates were cleared, Victor returned to our table with a broad smile on his face. "It's showtime, folks", he declared as he delivered the entrées before us with a well-practiced flourish.

It was hard for me not to gasp with delight as I inhaled the rich and creamy aroma of my Seafood Newburg; scallops, shrimp, lobster and chunks of swordfish bathed in an enticingly toothsome sauce that would make a multi-star French chef weep. Tasty risotto and a broccoli crown topped with orange hollandaise sauce accompanied the dish.

My guest's 'Tigers Brochette' consisted of two skewers of flawlessly grilled tiger prawns, swordfish and scallops in lemon butter sauce, along with rice, fresh carrots and squash. The seafood was tender and juicy, and the vegetables were perfectly al dente with just the right amount of seasoning to bring out their natural flavors.

In the few months that the new Executive Chef, Tom Goldie, has been at the helm, the menu has been completely transformed to offer guests a bevy of newly created dishes as well as time-tested favorites. The Lighthouse now also offers one of the most delectable and reasonably priced Sunday Brunch buffets in town.

Chef Goldie's desserts are extremely decadent, and we ended our meal with a thick piece of New York cheesecake topped with raspberry sauce and a slice of dark, dense and chocolaty 'Snickers' cake, which has become one of the house specialties.

We decided to forego an after dinner beverage, preferring instead to simply sit quietly for a few moments to enjoy our panoramic view of the shimmering bay and the downtown lights.

Earlier that evening, prior to our arrival at Tom Ham's Lighthouse at the very end of Harbor Island Drive, we had passed a number of other restaurants, hotels and cafés with signs and banners encouraging passersby to dine at their establishments. In retrospect, it seems as if this was an ironic stroke of circumstance …since on this particular occasion the best had indeed been saved for last. 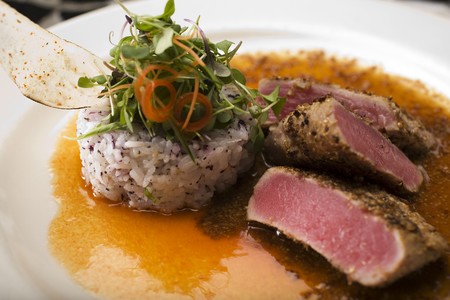