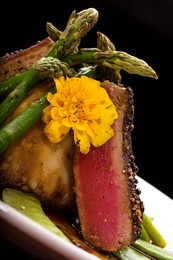 “There’re really no recipes,” Joe Busalacchi says of his culinary repertoire, “you just know what to use, know what goes with what—you just play around until you accomplish what you like.” He makes it sound so simple, but he truly believes that it is. “Cooking is not a very difficult thing to do. It’s [taking] what you really like, for your own palate. It’s experimenting.”

They are modest words for a chef that has not one, but seven successful restaurants. Well, there is something else, he says. “It’s passion. You got to love what you do.”

If passion is the secret ingredient, Joe has plenty of it. His love for food dates back to his childhood in Sicily, where he was raised on the flavors and ingredients of the Mediterranean. The cuisine focused on fresh fish, with lots of vegetarian dishes and very little meats. It was very seasonal, based around what was fresh and available.

Joe moved with his family to San Diego when he was nine, but fondly remembers his time in Italy. He recently returned to the country for a year, to refresh his memory and re-experience the dishes. His culinary style stems from those classic flavors. He says of many dishes on the menu, “I take old, old recipes and put a twist on them.”

As for how he got into the restaurant business, it started with fish. Joe’s first job in San Diego was as a chef on a tuna boat based in San Diego that would go out on the Pacific for two to three months at a time. “It was a 1200-ton boat, we had 22 crew members and brought in a million and a half worth of fish,” he remembers fondly.

After getting married and realizing that working on a fishing boat wasn’t exactly conducive to a family lifestyle, Joe decided to open a restaurant. His first restaurant was in a mall in La Mesa, a pizza place that served Sicilian-style deep dish pizzas. His second venture was to open a fish company, a small, casual, seaside operation that sold fresh shellfish and grilled fish sandwiches. He eventually sold the fishette, but was hooked on the restaurant industry.

“In 1985 I opened the first true Sicilian restaurant in San Diego,” he says of his namesake restaurant, Busalacchi’s on Fifth, and its traditional Southern Italian cuisine. The rest, as they say, is history.

With the success of Busalacchi’s on Fifth, Joe opened a series of other restaurants, all of which survive and thrive today. “Second was Trattoria Fantastica, a trattoria-style restaurant that was homey, and casual. After that I wanted pastries, so I opened [Café] Zucchero. Then, there was steakhouse [Po Pazzo]—we do a very specific style of Italian meats, with a thin breadcrumb coating that keeps the juices inside. We use 1700 degree ovens.” He also opened Zia’s Bistro, a modern pizza place serving thin-crust pizzas with such toppings as chicken and goat cheese; Little Italy Spaghetteria, a casual Italian eatery; and, most recently, Via Lago, bringing his famous Sicilian cuisine to Chula Vista.

Having been in the restaurant business for over 20 years, he has seen some changes. “Twenty years ago, when we started with Southern Italian food, most Italian restaurants were serving simple foods, catered to Americans. But that’s not what we eat in Italy.” Bucking the trend, he created menus filled with what he wanted to eat—healthy, inventive dishes, lots of pastas and lots of fresh vegetables. He explains, “food is changing all the time. But the old style never goes away.” He continues to stick to classic, simple dishes focused on good ingredients. “New food is very…frou frou,” he decides. “It’s focused on presentation, it’s more dramatic. I’m not into frou frou. I want good, homey, organic food that is what it is.”

The hardest thing about overseeing seven restaurants, he thinks, is teaching someone to create what he knows how to create. “I know what I can do. To teach someone, that is the hard part. It’s not easy—you have to get the style, the technique.” He compares this to an artist trying to teach an apprentice: “if there’s a great artist, no one can copy him.” Joe’s challenge is to not only teach his style, but to explain why things need to be done a certain way. He tries to convey the reason behind his techniques, for why, for example, he caramelizes onions separately before mixing them with other vegetables, rather than taking the fastest route and cooking everything at once. “Sure, there are shortcuts, but the dish isn’t the same.”

The Busalacchi family of restaurants has over 200 employees, and Joe tries to convey his style to each one. “I try to spend as much time as possible at each restaurant, and meet with the chefs.” He’s had at least one chef who has been with him for 25 years, and all of his other chefs have been with him for 10-15 years. “They understand,” he says.

Another challenge is his ambition. “We change the menus seasonally in all of our restaurants,” Joe says, adding that this isn’t as simple as simply sending out new recipes—when Joe changes a dish he believes the new dish has to be shown. This means every few months, he has to spend time at each restaurant, demonstrating new dishes. “Technique is what it’s all about. Technique and time,” he says.

“I’ll probably never be out of the kitchen,” he relizes. “I love what I do.” His personal favorite ingredients to work with are fresh pasta and seafood. “I love whole fish. We don’t always do it here but I love a whole fish that will serve four, five, six people.” He also says he likes meats, but is bigger on vegetables. He likes dishes that are healthy.

As for his cooking style, he believes “simple and fresh is the best way to go. There is nothing better.” All of his restaurants are trying to do everything as fresh as possible. “I’m not going to serve you something that’s not fresh,” he says. “If we run out of something, that’s it, we run out.”

He thinks that, “If I had to do it all over, I’d set out to teach people how they should eat.” That is his goal in life, he says. “Ideally, I’d like to have no menu, to have you come in and give you what I think you should eat.” He explains how he’d love to talk to guests, to see what they liked and didn’t, and then based on their taste preferences create a unique meal just for them. “Cooking is all about experimenting with other people’s palates,” he observes.

Ultimately, he chalks his success up to passion: “Passion, love, taking pride in what you do and taking time to do it right.” Everything he does, he does with heart. “I’m a firm believer—if you really want and try to make something, you can.”

Joe has already made an empire of outstanding Italian restaurants, but something tells me that’s not the end. “I still have a lot of dreams,” he says with a smile.