Even the most avid diner might be surprised how many types of cuisine have come out of the culinary paradise known as Italy. While it might be difficult to tell the difference between styles of cooking, guests at A16 will remember the signature delicacies of the Campania region in Southern Italy. Located on Chestnut Street in the Marina neighborhood, A16 presents the finest Southern Italian dishes in San Francisco, crafted by talented chefs and served by a friendly wait staff. Whether diners are stopping in to meet friends for a glass of wine and appetizers, or enjoying a celebratory meal, the menu at A16 is bound to please. Meats, cheeses, and vegetables come from local organic farms, and the Neapolitan pizza at A16 is cooked in an authentic wood-fired oven. Even the wine list is carefully selected by an expert sommelier, and features an abundance of rare vintages from Southern Italy. A16 is one of the best Italian restaurants in San Francisco where one can receive a finely crafted, authentic meal that will have you craving Campania.

A16 is the name of a highway in Italy that runs east to west across the ankle section of “the boot,” and ends in Naples. In the Marina District of San Francisco, there is a restaurant by the same name that serves the regional food one would find while driving this stretch of road. And even though the Marina is a bustling area of town densely studded with boutique shops, restaurants, and bars, A16 is perpetually packed.

Not long ago, Italian food was lumped together regardless of region. Spaghetti with Meatballs, Lasagna, and Insalata Caprese were ubiquitous items on most menus of San Francisco Italian restaurants. This is certainly not the case at A16: Here, the food is from the region of southern Italy, specifically from Naples and its surrounding areas. Italian food varies greatly depending on the region, and each place has its own set of dishes and wines suited to pair with the cuisine. A16 honors this age-old tradition and uses it to their advantage. Sixty percent of their wines are from Southern Italy, making it easy for patrons to choose an appropriate bottle even if they don’t know a lot about Italian wine and may not recognize any of the labels.

Shelly Lindgren, A16’s co-owner and founder, had a revelation while eating a simple plate of truffle pasta and drinking a perfectly paired bottle of Umbrian wine, during her honeymoon in Italy a few years ago. She realized that regional food could find no better pairing than with wine from the same area. Once back in San Francisco, she decided to act on this epiphany, opening an Italian restaurant that serves Neapolitan-inspired food and wine. A16 opened its doors on Valentine’s Day, 2004, and has been packed ever since. Recently, Head Chef Liza Shaw also became part owner, giving Shelly the opportunity to work on her unique wine list, which has expanded from 350 to 500 bottles. Shelly is happy to help guests pick the right pairing for their meal -- just don’t ask her where the Chianti is.

The restaurant, like most places in the Marina, is small and cozy. The façade of the building is brick with two bay windows painted black that symmetrically flank the black front door. The interior space resembles the kind of chic apartment common in East Village, New York, rather than San Francisco. The entry way is narrowly packed with a hostess stand and several high tables followed by a long bar that stretches half the length of the narrow dining room. As soon as I walked in, I felt the buzz of energy of the people around me and it became very obvious that I was in a popular place. The Thursday night we visited, A16 was bustling as usual, but our table was punctually ready for us and I was delighted to be seated in the beautiful atrium area to the rear of the restaurant.

For starters we ordered both the popular Mozzarella Burrata with Olive Oil, Sea Salt and Crostini, and the La Quercia Tasting: a trio of house-cured prosciutto of the Americano, Berkshire, and Speck varieties. Burrata is Mozzarella’s sexier sister. Mozzarella is stretched and made into a purse, which is then filled with fresh cream and Mozzarella curd. It has been a recent obsession of mine and I eat it wherever I can. Because it should always be served within 48 hours of being made, seeing Burrata on a restaurant menu is a sure sign that the restaurant is committed to serving the freshest and best quality ingredients. The cheese is typically so delicious by itself that it needs little accompaniment, and A16 understands this. Their Burrata is slightly tangier than others I’ve had, which helped me appreciate its creamy texture all the more. It was served in a little delectable mass generously drizzled with olive oil and sprinkled with fat grains of sea salt, and was accompanied by freshly toasted crostini. Eating this dish reinforced my belief that if I were ever stranded on a desert Island, I could happily survive on bread and cheese alone.

The tender, yet meaty La Quercia Tasting was a pleasant contrast to the soft cheese in both texture and taste. While the cheese was delectably delicate in texture and light in taste, the meats were gamey and flavorful, varying in degrees of firmness. The three expertly cured meats arrived on a rustic-looking rounded wooden slab. The meats’ rosy coloring ranged across the spectrum and each one was nicely marbled. Also, each had its own distinct flavor and texture. The Americano was the most delicate; it was pliable and uniformly silky. The Berkshire was the most gamey in flavor and was my favorite of the three. It was darker in hue and had thicker, more textured bits of deliciousness where the flavor was more concentrated. The Speck variety was thinly sliced, and its flavor highlighted its salt-curing and smoking preparation method rather than the varietal of pork used. It too was delicious. Both the Burrata and the Prosciutto went nicely with a bubbly glass of the Ferrari Brut Rose’, of Trentino Alto-Adige.

As an interim between appetizer and dinner, we ordered the Pumpkin and Ricotta Gnocchi with Lacinato Kale, Pancetta and Pecorino. The simple white plate arrived decked out in festive color. The delicately orange gnocchi were surrounded by pieces of forest green kale and sprinkled with rose-colored bits of Pancetta. The dish was a happy sight, indeed. The airy, lightly flavored Pumpkin Ricotta gnocchi were a wonderful canvas for the touches of earthy kale and punches of savory Pancetta to play on. The Pecorino cheese tied all the flavors together into a whole that was as delicious as it was pretty.

For our first entrée we chose the Black Cod with Pistachios, Capers, Meyer Lemon and Herbs. The two succulent pieces of cod came poached in a little pool of fruity olive oil and were covered with a layer of ground nuts, capers, lemons and herbs. The tender flesh of the fish was made flavorful by the topping, which added everything that such a delicate fish needs: a little bit of crunch from the nuts, acid from the lemon, and a rainbow of delicate flavors from the herbs and capers. As a side dish, I ordered the Erbette Chard with Pine Nuts, Currants, Garlic and Lemon; it provided a welcome hit of toothy greens made interesting by the alternating components of sweet, crunchy, zesty, and spicy. The entrée and side were both light and satisfying, leaving the diner both content and with sufficient room for dessert.

The Berkshire Pork Sausage with Anchorcress and Lemon entrée came next and was also surprisingly light. The dish consisted of two nicely browned sausages curled into the shape of cinnamon buns that rested on a bed of tender young greens with a generous wedge of lemon on the side. The skin of the sausage made a delicious pop sound when cut with a knife; the juicy, flavorful meat was seasoned with precision. The flavor of the Berkshire pork stood out surprisingly well, being both gamier and sweeter than regular pork. As a side for this we ordered the Roasted Potatoes and Turnips with Pickled Onions, Capers and Chiles. They provided a nice sized bit of starch, which was made flavorful by the restaurant’s skilled use of varying elements -- in this case the slightly sweet onions, savory capers, and subtly hot chiles played well together.

For dessert we ordered the famed Chocolate Budino Tart with Sea Salt and Extra Virgin Olive Oil. It was delicious and like nothing else I’ve ever tasted. Lately it seems that the borders between sweet and savory are blurring. Examples of this culinary trend can be found in creations like foie gras ice cream and chocolate covered potato chips. The balance of sweet and savory has to be absolutely exact in order to achieve the chef’s desired effect, and thus this kind of dessert can be very difficult to present successfully. I was impressed with how well the Chocolate Budino managed to walk the line. The small, round chocolate cake of pudding-like consistency came drenched in olive oil and sprinkled with a few chunky grains of salt. The three flavors were sharp and distinct, yet somehow worked well together. The pungent olive oil and unexpected bursts of salt made the chocolate taste sweeter and earthier, and made me really appreciate the soft texture of the cake. It melted on the tongue, resulting in a dessert that had neither the overwhelming density nor richness of a regular cake, without sacrificing any of the flavor.

A16 is a wonderful mini excursion to Southern Italy. The wine list is suited for those who are interested in exploring beyond the bounds of what is available in local stores. The food is uncompromising in its quality and freshness; the talented chefs know just how to balance flavors so that the results are well-rounded and complex. By mastering individual ingredients that many home cooks would shy away from combining, A16 ensures we have a reason to go out. 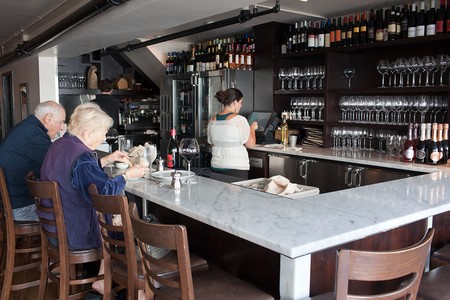