In its new space on Divisadero at Grove, Bar Crudo is a bustling restaurant reminiscent of a hip loft. The focus of the sparse and well-chosen menu is raw fish infused with creative sauces and garnishes with not a grain of sushi rice in sight. There are a few well-executed cooked fish and seafood dishes as well. If you hunger for thick steaks and mounds of buttered carbohydrates, Bar Crudo is not for you. If your dreams, however, are of Butterfish accented with Meyer lemon tapenade or Arctic Char with a drop of horse radish cream, don’t let its overwhelming popularity discourage you, a table will soon open up. 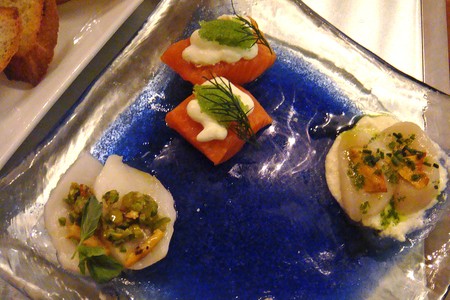