Destino is lively and casual, and walking inside on an otherwise quiet Monday night can feel like being transported to a South American city during happy hour. The bright walls of the dining room are decorated with religious icons and mirrors of all shapes and sizes. Destino's menu is composed completely of small plates, all infused with flavors that Executive Chef James Schenk grew up with. Examples of the menu include three striking ceviches, tiger prawns with a spicy sofrito puree over plantain-bacon cakes, and a popular Peruvian street food: beef-heart skewers served with aji panca pepper reduction.

Walking into Destino on an otherwise quiet Monday night can feel like being transported to a South American city during happy hour. A tiny but festive bar situated near the entrance serves a wide selection of Peruvian liquors, and giant mirrors hang at an angle, skewing the bustling dining room, where religious icons hover above the 50 seats. Destino’s menu is composed completely of small plates, all infused with flavors that Executive Chef James Schenk grew up with in Peru.

Located on the quiet stretch of Market Street between the Civic Center and the Castro, Destino enlivens the neighborhood with its unique Central and South America sensibility. Peruvian cuisine is relatively new on the scene in the United States, but it is quickly catching on, due to top chefs like Gastón Acurio and Emmanuel Piqueras. James Schenk, Destino's chef and owner, is quickly becoming part of the prestigious lineup, with a flurry of awards including Hispanic Magazine's Top 10 Hispanic Chefs Nationwide. His dishes are revered for their cultural authenticity. He opened Destino in 2000 and says that his food, which he calls “Nuevo Latina,” is primarily inspired by his Peruvian mother. Peruvian cuisine is adventurous, in part due to its wide variety of sweet and spicy aji peppers, which serve as a base for many of Chef Schenk’s dishes.

Monday night was busier than I predicted because of their recently opened sister bar next door, Pisco, specializing in Peruvian and South American liquors. While Pisco offers some small plates, it is not suited for complete dinner service. It is closed on Mondays, and diners who had come for Pisco spilled into Destino. The smooth, fruity drinks served at both Pisco and Destino include the M&M Caipirinhana—a  mix of Leblon (a Brazilian spirit distilled from sugar cane), mint, and mango—and Pisco-Punch “The Original,” a blend of BarSol Pisco brandy, pineapple syrup, and soda. If you love rum then Destino is the place to be; their cocktail list includes Oronoco Brazilian Rum and Ron Cartavio, 1929 rum from Slera Peru, not to mention a long list of rum sours.

Destino is great for a drink and appetizer or for a dinner and a bottle of wine, and a festive place to take a date, friends, or family. However, the small dining room can feel cramped; at times, you sense that your conversation is anything but private.

Though it was busy and I had not made a reservation, we were quickly taken to our table, which the hostess pulled out to allow my dining partner to squeeze into her seat. Once seated, I immediately noticed the gigantic mirror hanging at an angle on the opposite wall. It took a moment to get used to looking at myself from a downward angle, and another moment to get used to seeing the entire dining room reflected at me. The experience added to the fun of Destino and gave the illusion of being in a larger room.

The wine list focuses on the New World wines of Argentina, Chile, and California but also includes a substantial selection of Spanish wines. Up-and-coming varietals such as Albariño, Tempranillo, Grenache, and Malbec are given a place beside more established varietals like Pinot Noir, Cabernet Sauvignon, and Syrah. The white wines are limited to a mere seven bottles, but the list of reds includes a full range of light and rich to thick and meaty wines. Only two bottles are listed over sixty dollars. Sparkling, white and red wines are offered daily by the glass.

Our waiter, attentive and helpful, suggested four to five small plates for two people. With that in mind, I felt that the menu was a bit short, especially when I was informed that they were out of the Filet de Bacalao, or plantain-encrusted black cod. However, each menu item was inventive enough to pique my interest, so what Destino lacks in quantity, it provides in quality.

We began with the Ceviche Sampler, a surprisingly filling appetizer that includes all three available ceviches: the A la Peruana, the Destino Chino, and the A la Mexicana. The ceviches were served in a long, thin dish with three partitions; each ceviche had its own presentation: the white A la Peruana garnished was with fried shavings of carrot, the ruby red Destino Chino had thinly sliced red bell pepper, and the dark purple Ahi tuna of the A la Mexicana showcased a long fried plantain sticking out of it.

Filled with an intense acidic and spicy flavor, the A la Peruana is a walk on the wild side. The hot, yellow aji amarillo chili gives it a spice that is equally matched by the citrus bite of lemon and lime. Probably not the best introduction to ceviche, but for those who already love ceviche, the A la Peruana is a powerful delight.

The less intense Destino Chino allows the intrinsic flavor of the yellowtail tuna to shine: a wonderful, sturdy fish. The other components of the dish include very thinly sliced red bell pepper, ginger and lemongrass oil, each complementing a different aspect of the dish, depending on which finds its way onto your fork. The menu claims that it comes with tiger prawns, but disappointingly, I did not find any in my serving—perhaps because it was part of the sampler.

The star of the ceviche was the A la Mexicana. Refreshing mango coats the tender Ahi tuna, and pieces of avocado give the dish a nice creaminess. The fried plantain garnish adds a semi-sweet touch.

Next, we discovered why beef heart is so popular in Peru, digging into the Anticuchos de Corazon, beef heart on skewers with aji panca pepper reduction, green garlic, and Peruvian choclo. The aji panca pepper is a long green pepper and choclo is a type of corn from the Peruvian highlands. The appearance of the dish is very simple: two skewers of beef covered in a thick reddish brown sauce over kernels of tender choclo. My first bite of beef heart shocked me with vinegar; however, as the dish progressed, the vinegar began to lessen and the truly delicious aji panca reduction—similar to a tangy barbecue sauce—began to shine. The beef was tender, and I would not have known it was heart (as opposed to any other cut of beef) had I not read the menu.

The meal was paced perfectly: The ceviche arrived shortly after the wine; the Anticuchos de Corazon came as soon as we'd finished the ceviche. The Picante de Camarones, Mofongo showed up when we were halfway through the Anticuchos. Two plantain-bacon cakes were hidden beneath farmed tiger prawns and an apple-sauce-like sofrito puree. As with other dishes, a tall slice of fried plantain stuck out of the center. I was happy to see seven tender prawns, a generous amount for a small plate. The plantain-bacon cakes combined the sweetness of the plantains with the rich, tender pieces of bacon. A bite that included prawn, plantain-bacon cake, and the sweet and spicy sofrito puree was perhaps the pinnacle of the meal.

The last two plates arrived as I took my last bite of tiger prawn: Conchitas a la Parmesana and an Empanada with seasonal vegetables. The Conchitas were presented sparely: four large Hokkaido day-boat scallops in two half scallop shells, topped with a little melted parmesan. As simple as it looked, the flavors were audacious. The scallops were perfectly tender and fresh and the parmesan and garlic butter lent sharpness to the dish. The Empanada, unfortunately, did not live up to the rest of the meal. The dough seemed under-baked, and the whole thing tasted like a potato sandwich. 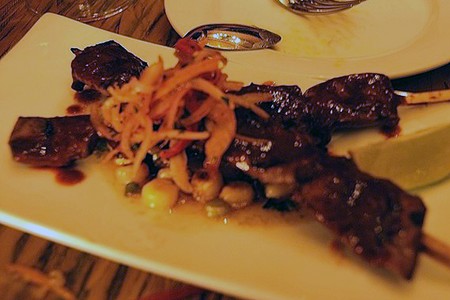 Service Charge of 18% is added to parties of 6 or more.

Please select one from each category.