The French tradition of amuse bouche is in full bloom at Jardiniere, but diners will find the execution at this one-of-a-kind restaurant to be refreshingly far from traditional. This San Francisco gem, from cuisine to decor, makes any dinner a meal to remember and is sure to leave guests longing to return for more. Foodies will adore the attention to detail and regulars are able to enjoy an ever-changing menu of seasonal specials that reflect the power of fresh, sustainable ingredients. The restaurant's proximity to the city's symphony and opera are another draw for many diners. Experience indulgence at the hands of a visionary local chef while dining in style at Jardiniere.

Pampering is elevated to an art at Jardinière, where the classic French saying “être comme un coq en pâte” springs to life amid luxurious dishes and dramatic balcony views. Literally translated, the phrase means “being like a rooster in dough” and is echoed in the American saying “happy as a clam.” Whether you’re enjoying a post-symphony digestif or indulging in a five course fete, the culinary minds behind this San Francisco homage to fine dining undoubtedly deliver on their age old promise.

Ensconced in Hayes Valley, the restaurant’s distinctive point of view starts with the building’s exterior. Jardinière, opened in 1998, fills out a deceptively large brick space on the corner of Grove and Franklin Streets. It’s also located directly across from the city’s symphony hall and opera house, making it the perfect choice for show patrons. Valet parking is available for $15 and proximity to public transit is convenient. There’s also street parking and three near-by lots to check your car so you won’t be late for your reservation, which is highly recommended for Jardiniere. Quaint shops and showrooms abound, and diners out for a pre-dinner stroll will love soaking up the local charm. In addition, the majesty of nearby City Hall never fails to thrill even long time residents. Hayes Valley itself has enjoyed a renaissance of sorts in the last decade which has seen resurgence in character-filled boutiques and distinctive dining experiences for virtually every palate. Happy hour and lunch are not offered at Jardiniere, however the restaurant offers a Monday night prix fixe menu for $49.00 and is open every night at 5:00 p.m.

The restaurant’s name, Jardinière, is loosely translated to mean gardener, which proves to be a fitting moniker. Cultivated from one of the finest chefs in the Bay Area, the menu is an endlessly delightful flirtation between classic French fare and noveau haute cuisine. Francophiles and novices alike will leave Jardinière with a reignited passion for all things refined.

Co-owned by Chef Traci Des Jardins, the eatery was developed with seasonal eating in mind. Des Jardins prioritizes locally sourced products, eco-conscious purveyors and sustainable farms whenever possible. This emphasis on staying close to the land when creating a menu was born of the chef’s formative experiences preparing tortillas in her grandmother’s kitchen. Des Jardins draws on her ample culinary experience as well as her French-Mexican heritage to push the boundaries of classic French fare.

Hailing from Firebaugh, California, Des Jardins boasts an impressive culinary pedigree with parents that brought both French and Mexican influences into the kitchen. She left the San Joaquin Valley to study at the University of California in the 80’s. Throughout her training, Des Jardins gained valuable experience under the tutelage of some of the country’s finest chefs. Namely, she cut her teeth at La Maison Troisgros, Patina Aqua, Elka, and Rubicon. Currently, the chef owns Public House, a popular watering hole near AT&T Park where they serve ballpark fare and craft beer, as well as Mijita, a deliciously appointed Mexican restaurant with two locations at both the ballpark and in the Ferry Building.

A banner year for Des Jardins was 2007, when she was honored with the James Beard Foundation Award for best chef in the Pacific region. Earlier, in 1995, she enjoyed the title Rising Star Chef of the Year again by the venerable James Beard Foundation. San Francisco magazine named Des Jardins Chef of the Year while Food & Wine anointed her Best New Chef in 1995. Jardinière headed up Esquire magazine’s Best New Restaurant tally while the eatery earned praise from the James Beard Foundation for the same distinction. Finally, the restaurant has been honored on the Top 100 Restaurants in the Bay Area list by the San Francisco Chronicle since it opened its doors in 1998.

An atmosphere of indulgence is evident at Jardinière, inviting me to linger at the well-appointed downstairs bar before I make my way upstairs to the dining room. The bar is a sweeping semi-circle and is located on the lower level. It beckons patrons into the lovely area and the décor envelopes me from the moment I cross the threshold. Richly textured fabrics give way to the milky scenes of earth tone walls. A small seating area gives the bar a lounge vibe and allows me to relax while waiting briefly for my table. I try my best to not sink too far into the plush couches, but it’s difficult to pry myself away from this level of comfort. Ultimately, Jardinière strikes a delicate balance, boasting a light art deco touch while creating a timeless respite from the outside world.

The lighting casts everything in a champagne glow without sacrificing any clarity. The lighting scheme is expertly conceived. It seduces and transports diners into a world of aromatic embraces and a glittering ceiling encrusted in stars. Eating under the stars is typically reserved for camping, but at Jardinière you’re in for a special treat. The center of the main dining room is a stunning backdrop for any meal and features a two-story dome roof, glittering with countless tiny lights that lend an ethereal feel to every course. Many patrons adhere to a somewhat formal dress code but, as is true in much of the city, business casual attire is fine.

The glaring difference between a good restaurant and a truly superb eatery is evident right away by the abundance of hospitality shown by the maitre d’ and hostess. The vibe is relaxed and personal around the lounge, while a glimpse upstairs reveals a more rarefied world of fine French dining. When we arrive at the table, it is covered in white tablecloth and adorned with fine china. Our server, Peter is well-versed in all aspects of the menu specials as well as the obscure peccadillos of French cuisine. He is always at the ready with answers and suggestions from the get-go, such as his favorite menu picks and popular wine pairings.

After perusing the menu, it is clear that we will start with a hearty starch. Our waiter suggests the lamb and it fits our hankering for sweet and savory. The pasta portion of the evening is a delectable foray into Chef Des Jardins’ aptitude with lamb. My dish marries Wild Fennel Pappardelle with Sonoma Lamb Sugo and Chanterelle Mushrooms. The sugo, a velvety sauce, brings out the meat’s supple sweetness while the mushrooms are soft and buttery on the tongue. The pappardelle is pillowy perfection infused with fragrant notes of fennel, lending the dish a rustic flavor.

Next, a surprising rendition of salmon arrives at the table. A dish of succulent Mystic Salmon paired with Blue Lake Beans, Niçoise Olives and a Tomato Vinaigrette. The fish itself is tender and not too oily as the chef has gingerly prepared the protein-packed entrée with ingredients to complement the salmon’s consistency. Nicoise olives are nestled among large, rich beans that serve as a great mild primer for the salmon. The tomato vinaigrette punches up the flavor profile considerably, and diners in search of a taste bud surprise should gravitate towards this dish. Tart tomato notes mingle with buttery salmon to create a full bodied experience.

We continue with the Jardinière Charcuterie Plate. It is prepared thoughtfully and arrives like an artist’s palette, each meat arranged with consideration for both aesthetics and texture. The mousse is my first foray into the characuterie and is a delectable opener. I use the hearty bread and mustard to help bring out the flavors. Light, yet still substantial, the mousse delights my taste buds with earthy flavor notes and demonstrates the chef’s proficiency with creating textured dishes. Next, the mortadella tastes like a richer, more complex version of expertly cured sausage. I savor its almost creamy texture before moving onto the pile of lonza. The lonza takes pork tenderloin to a new level with undertones of smokiness, fatty sweets and a rustic salt rub. Lastly, the Rosette de Lyon is served as a medallion that seems to melt seamlessly into the taste of fresh bread and stone ground mustard. Hearty and nuanced, this pork sausage is filled with savory umami notes which don’t disappoint.

The main course is a sensory delight. Our server sets the Liberty Farms Duck dish in front of us with panache and I take in the aromas for a moment before digging in. The dish is exceedingly well rounded with a sweet fattiness that belies its lean meat. Expertly crisp skin gives way to tender duck breast that is a delightful departure from most fowl. This dish is a signature Jardinière favorite that boasts a savory balsamic glaze which complements the meat without ever competing. The Santa Rosa Plums are a heavenly match and lend the duck its sugary yet tart notes that keep our taste buds guessing. They’re prepared delicately and successfully hold their own on the flavor front. Wheat Berries and Young Mustard Greens finish off this menu gem by adding tender grains coupled with slightly spicy greens.

I conclude the meal with a surprisingly refreshing dessert that demonstrates what summer’s seasonal bounty can become in the hands of a gifted chef. The Cucumber Sorbet takes on a sweet flavor while leaving me with a crisp, fresh taste that lasts even after I leave the restaurant. Served with heirloom melons and olive oil streusel, this dessert is a true original. The melons burst with flavor and add nuance and subtlety to the cucumber’s more straightforward taste. The Olive Oil Streusel is an unexpected treat as it allows the flavors to unfold throughout each bite and lends a smooth texture to the other ingredients.

Jardinière truly highlights the difference between eating and dining. Each course is a well considered journey through the mind of Chef Des Jardins, while every table transports diners to a world where the champagne is always chilled and perfection is the standard. One meal at this French food shrine will redefine even the most ardent foodie’s notion of dinner. 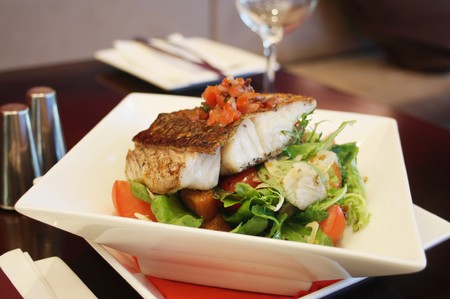