On the corner of 303 2nd Street, a large terracotta wall signals the entrance to one of SOMA’s hidden treasures. Like an ancient Mayan temple Maya, the restaurant, hides in its own jungle of concrete and glass office buildings. A classy bar with a wall of Mesoamerican masks hosts the wildly popular weekly Happy Hour for local professionals, offering dozens of margaritas, mojitos, wines of the world and at least 100 different types of tequila shots. There’s music, which sounds like Latin pop, and a lot of excitement. The dining room to the right of the bar is simple yet serves highly innovative, exciting and delectable renditions of traditional Mexican cuisine, the fundamental elements of which are said to have been created by the Mayan Indians of Central America.

Richard Sandoval, the creator of Maya, is one of the premier chefs of modern haute Mexican cuisine. He combines authentic Mayan Mexican ingredients with the later culinary influences in Central America:  the Spanish, the French, the Caribbean, and the Portuguese. His credo is to blend three or four contrasting tastes into one masterpiece. He has won awards throughout America and Mexico, has partnered with Placido Domingo in New York and has established his cuisine in Las Vegas, Arizona, Colorado, Washington D.C., and California. There is a Maya in New York City, Dubai and San Francisco.  Here in our city, with prices reasonably ranging from $5 to $24, he has made this particular restaurant into a neighborhood haunt available to all.

We entered Maya SF on a Saturday night in August. The host seated us in the dining room defined by dark brown walls, sparsely decorated and with discrete overhead lighting. The broad long rectangular glass windows faced the office complex courtyard and street. Sharply squared tables lined the perimeter of the room and were spaciously scattered into the middle of the dining space. Alternating light and dark woods formed the table tops which were coated with a shiny veneer for protection from hot plates and perhaps spilled red wine sangria. As we sat down, our backs rested in chairs decorated with dark and exaggerated Mexican carvings. There was one round table in the center of the room covered with a white table cloth and set with silverware and glasses. We were unsure of the role of this table because in general, the design of the room intends to be angular, sharp and sparingly chic.

At 7:30pm the atmosphere was rather subdued and calm, populated mostly by families and a number of twosomes and friends, like us dressed in a hodgepodge of casual fashion that reflected the diversity of the Maya crowd. To the left of the dining room is the classy bar, which, though enticing had not yet filled up this early on Saturday. As we were seated we were treated with consideration and promptness by our understated and respectful servers. Our waiter knew precisely the details of the ingredients in each dish and helped guide us through our discovery of the fascination and creativity of this unique Mexican cuisine.

I ordered a margarita, the Maya Traditional which blended fine Herradura tequila with the lime and liqueur to make the best margarita I have ever had in a restaurant. My friend opted for the Sangria, which toasted our eyes with a rich berry red and tasted of full, very sweet fruit.

Since I am such a fan of ceviche, I ordered the Ceviche de Atun to begin the meal. It appeared in a beautiful white soup bowl, its mixture of bite-sized chunks of tuna, orange, cucumber and red onion soaked in a broth of tomatillo-chile with decorative waves of ground cilantro along the edges for a truly stunning visual display. My dining partner ordered Quesadillas Surtidas. The corn tortillas rose like puff pastry and were filled with Oaxaca cheese, mushrooms, chilies and salsa roja and decoratively crossed with crema. These were like no quesadillas we had ever seen or tasted before. The tortillas were light and deeply corn flavored and the combination of fillings had this tangy blend of sweet cheese and just mildly spicy salsa. They too were presented beautifully on an oblong square white porcelain plate.

For dinner, the Chef de Cuisine, Jose Luna, and the owner, Lisa, recommend the Mole Poblano, their Langosta y Camarones and then the Halibut Totec.  I ordered the Mole Poblano to sample the signature Mole of Maya SF. The dish combined grilled chicken, plantain, Maya’s mole and cilantro. The Mole itself is a work of art, taking eight hours for Maya SF’s mole specialist, Ana Maria, to make it. The ingredients blend three types of chilies: ancho, mulato and negro. Then the cook adds the toasted peanuts, almonds and a special brand of Mexican cookies that are crushed and combined with plantains, golden raisins, black raisins, Mexican cinnamon sticks and garlic. The Mole for me was just rich enough with chocolaty and chile flavors, but not too rich, complementing the chicken and plantain slices.

My dining partner ordered the Salmon Enchilada, which features Maya SF’s tasty corn tortillaswhose delicious freshness and traditional preparation pay homage to the Mayan God of Maize. Like the quesadillas, this enchilada was not what we expected in either its physical design or content. Lying on top of this crisp yet soft bed of tortilla, was the cotija cheese blended with mole rojo. Spices of the mole and the milky cheeses combined to give a rich flavor to salmon. On top of these flavors came the juicy salmon which hit the tongue with that wonderful rich fish, but not fishy, taste. Marinated red onions crisscrossed the top of the fish. All this combined to achieve Chef Sandoval’s creative goal of blending diverse textures and tastes varying from the ancient Mayan Indian staples of maize, bean, chili pepper, to the later Spanish, European and American influences in Mexico cooking. The entire dish reminded me of a temple of staggered steps, with Maya’s characteristic style of presentation emphasizing the stacking and pyramiding of elements.

By this time, we had migrated to one of the excellent California chardonnays on the wine list by the glass. The wines offered came from a variety of different countries and regions. All in all, there are 27 wines by the glass and 39 by the bottle. By the glass, we chose the Saintsbury Chardonnay and the Eberle Steinbeck Vineyards Syrah.

There was hardly a grain of hunger left so we chose a dessert to be shared. We ordered the Tequila Infused Bread Pudding with a cabernet sorbet. The alcoholic infusions were completely understated. The cabernet sorbet had a hint of wine and a deep purple, slightly tart berry flavor. The bread pudding, coming in two tiny bites side by side, was as light as a puff and rich in vanilla flavors that blended well with the tequila. It was for us a topping off of the dinner and a comfortable shared finish.

For an entertaining Happy Hour, don’t miss the energy of Maya SF. The bar has a rich, golden light and the wall of Mesoamerican masks creates an exotic, historic and romantic atmosphere.  For a more sustaining interlude, make yourself at home in the deceptively simple dining room where you will discover an ancient cuisine brought to the heights of modern taste. With its creative, delectable, modern haute Mexican cuisine at extremely reasonable prices, Maya SF is extraordinary. 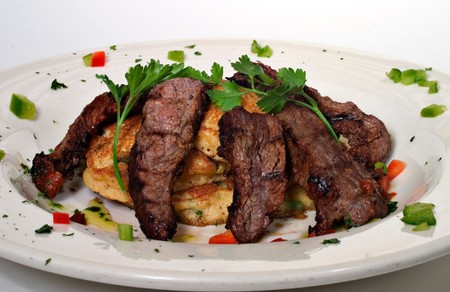