Quietly tucked within the Hotel California, at the edge of San Francisco’s infamous Tenderloin district, Millennium presents a unique marriage of socially-conscious vegan food and the exacting standards of fine dining. Chef Eric Tucker brings to life a wide range of exceptional vegetarian dishes, relying on the natural vibrancy of his produce and a gift for innovation to make each morsel complete—in spite of a total absence of meat. A small but robust wine list, focusing on organic and biodynamic options, rounds out the mission of sustainability. Millennium is an ideal choice for vegetarian diners looking for something more, or for traditional diners in search of something new.

Vegetarian Food with a Gourmet Edge

For many people, the thought of vegan cuisine brings to mind bland, listless food and dishes that are little more than a slab of tofu drenched in some sort of simple sauce. Millennium dispels any such preconceived notions with the first bite, offering up delicacies that are rich and complex. Since 1994 Executive Chef Eric Tucker has been shepherding this gem of a restaurant, working tirelessly to innovate and inspire with his mission of healthy, entirely vegan food that stands proudly with the finest dining San Francisco has to offer.

Millennium has settled into a new home at 580 Geary Street, in the same building as the Hotel California, which once housed the luxurious Brasserie Savoy. Millennium’s new space is reflective of its arrival into a world populated by chic gourmet restaurants. The gigantic zinc-topped bar from the Savoy days is still the centerpiece of the room, and when we arrived was populated with hipster twenty-somethings perched atop stools, enjoying organic cocktails and non-alcoholic libations. The interior is softly lit, and I found myself captivated by the long hanging fishnet chandeliers – which I later discovered were made from recycled plastic bags, woven into a vivid example of Millennium’s mission of sustainability. The seats we sat on were faux leather, and from our table I could see booths which featured faux lizard skin – all part of the earth-friendly consciousness that permeates Millennium.

The ambiance immediately set me at ease: quiet enough to enjoy an amazing meal, but with a vibrancy spilling over from the bar that kept it from feeling like a library. Our waitress introduced herself, gave us a quick overview of the philosophy of Millennium, and left us with our menus and a wine list.

The menu lay somewhere between a traditional list of offerings and a discourse on ethical restaurant practices. Sprinkled throughout were explanations of the business: the Natura-filtered water (eliminating the waste of bottled water while keeping the quality level high); Millennium’s philanthropic work in the community (supporting the homeless population and working with community garden projects); and invitations to various Slow Food and farmers’-market-themed events.

The breadth of Millennium’s menu is hard to appreciate without looking at it—it runs the gamut of cuisines, including Mediterranean, Spanish, Korean, and French flavors, and each dish description is more sumptuous than the last. There was much hand wringing as we struggled to pare our choices down.

With the food decided upon, we turned our attention to the wine list. At less than eighty wines, it takes up only a single page. That’s because Millennium features only organic, sustainable, and biodynamic wines on their list, firm in their belief that sustainable practices yield higher quality.

In spite of its small size, the wine list is impeccably put together. There are a number of high-end small producers, and a good range of wines by-the-glass and half bottles available. We decided on a 2001 Domdechant Werner Riesling to start with, to balance out the spice we anticipated in our appetizers.

Our waitress returned to take our orders, and to deliver an amuse bouche – a creamy, herbed nut spread and fresh-baked bread. The amuse gave an immediate insight into what we could expect from our meals, and no one was disappointed. The flavors of the spread were rich and subtle—hinting at cheese while remaining entirely unique—and the bread was supple and slightly sweet.

When our appetizers arrived, there was a collective gasp from the three of us. The artistry Tucker brings to his preparations immediately sets him apart from the mass of other vegetarian restaurants in the Bay Area. This is haute cuisine plating at its finest.

My Sesame Crusted Oyster Mushrooms were a pale off-white, arranged in a tower on a plate sprinkled with herbs, and resting with a plum sauce and sea palm relish. They were delicately crusted, and managed to remain light and flavorful in my mouth, rather than succumbing to the lure of heavy richness that can sometimes turn encrusted dishes into little more than bar food. Their chewy texture was reminiscent of calamari, but there was not a single bite in which I felt Tucker was trying to mimic or replicate some seafood dish – this was a creation all his own.

The Black Bean Torte was as dark as charred bone, served atop a cashew cream sauce and with a dab of watermelon salsa. It melted luxuriously in my mouth, and the layers upon layers of flavor continued to reveal themselves. The sweetness of the caramelized plantains provided a perfect counterpoint to the slightly spicy habanero papazul, and the entire effect was complemented by our Riesling.

The Charred Cherokee Tomato Bruschetta, with beautiful Cherokee tomatoes topping them, were truly stunning. Again, the combination of flavors here was remarkable, not just for vegetarian food, but for any sort of food. The savory tofu, the slightly bitter arugula, the subtly sweet corn and onion, all combined to entice my palate. This dish was another triumph of balance, and by the end of the appetizer course I found myself with a deep respect for Eric Tucker’s sense of proportion, and eager to see what the entrées would bring.

I was not disappointed. The Mediterranean Roulade that came was colorful and elegant, and perfectly plated. I was worried about two things when I chose this dish: that the sheer number of different flavors would create a chaotic jumble in my mouth, and that the seitan “sausage” would be striving towards a meatiness it could never achieve. I needn’t have worried. The many disparate elements—trumpet mushrooms, toasted almonds, dark greens, pine nuts, red potatoes—came together without confusion, and resulted in a fabulously multi-faceted gustatory triumph. The sausage, for its part, did not upstage the other ingredients, and never once bludgeoned me with its pseudo-meat nature. In fact, although it was listed as a Merguez-style sausage, leading me to believe it would pack a bit of a kick, if anything I found the spice level scarcely noticeable – I would have preferred more spice.

I anticipated the Fresh Corn Tamale to be the least exciting of the entrées to my palate. Although I enjoy Mexican food, I have rarely found it as stimulating as most other styles found in haute cuisine. In this case, I was happily surprised. The huitlacoche ragu added a complexity of flavor that I’ve certainly never found in a tamale before, and for that reason alone it was a worthy pick.

The Korean Barbecue Tempeh, while the least exciting of our choices, was nonetheless quite good. The barbecue sauce was adequately prepared, the kimchee tasted authentic enough, and the noodle salad had just the right consistency and salt. After such mind-blowing dishes, however, simply good felt like a bit of a letdown as an end to our meal.

Until, of course, I remembered that our meal was not yet over. Our waitress brought out the dessert menus and handed them to us with a twinkle in her eye that set my heart racing. She, it seemed, knew something about these desserts that I didn’t. Pushing away our feelings of satiation, we quickly decided on two desserts to split among the table: a selection of truffles and an intriguing tiramisu.

There are many people who judge a meal on the merits of the dessert course, and in that case, Millennium is a giant in the field. Both of our desserts were plated with such exquisite care that it seemed a great waste to dig our spoons into them, but once we did, none of us could stop. The truffles were among the best I have ever tasted in my life, and the fact that they were vegan is a testament to the absolute genius of pastry chef Anne Baptiste.

I must admit, it was largely skepticism that led me to order the tiramisu. The idea of this decadent dish prepared without egg was so astounding that I had to see how it was done. The answer is largely that Baptiste creates a monumental achievement of a dessert that is, nonetheless, more an homage to the tiramisu than anything actually resembling one. Served in a small ramekin, this was more of a bread pudding – albeit one of the best bread puddings I’ve ever had in my life. Topped with delicious dairy-free mint ice cream and a fresh sprig of mint, I found myself having to hold back from running my finger along the rim to get the last few crumbs.

All told, my meal at Millennium was an eye-opening and delightful experience. From a service perspective, things could scarcely have been better. Throughout the meal the wait staff was incredibly attentive, without being intrusive in the least. While our waitress was clearly busy with a full house, she never once lost her friendly demeanor, and was always at hand with extra information about dishes or the restaurant as a whole.

I sat down hoping to see what good vegan food tasted like, and I left having had one of the better meals of my life. For anyone who loves food – vegetarian or otherwise – Millennium is sure to excite the eyes and palate. I will undoubtedly be visiting again soon. 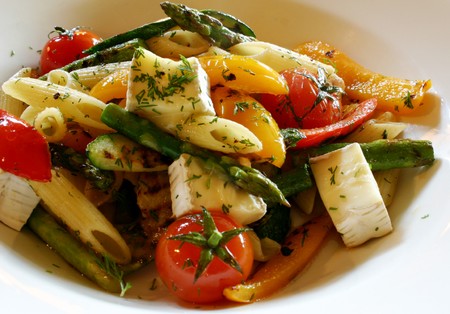