Centrally located on Post Street just off of Union Square, Postrio is the sort of restaurant San Francisco is famous for. Innovative food that draws from a myriad of cultures, a wine list that has both breadth and depth, a well-designed interior adorned with the works of famous local artists, and an atmosphere at once refined and relaxed makes Postrio one of the finest restaurants in the Bay. Priced reasonably enough for regular fine dining, the restaurant also offers standout dishes to turn any occasion into a special one.

Wolfgang Puck is undoubtedly one of the most celebrated chefs in America today. Since opening Los Angeles’ renowned Spago at the age of 33 in 1982, he has been a golden child of the food world. His early success allowed him to branch out into cities around the country, and in 1989 Postrio opened its doors in the Union Square neighborhood of San Francisco. Balancing its offerings between light, comforting fare, and more ornate, foodie-style cuisine, Postrio manages to offer something for nearly everyone. The energy at the restaurant is vibrant and friendly, and it is the kind of place one can return to again and again.

Since its opening, the restaurant has helped to define the cuisine of San Francisco. The list of chefs that have graduated from positions at Postrio to open their own world-renowned restaurants in the city is lengthy, and Puck seems to have a gift for selecting only the best new chefs to manage his Bay Area flagship. The chef de cuisine at Postrio has recently changed, with Seis Kamimura joining the team after a career that includes stints at Chi and Bada Lounge, and positions as executive chef at BOKA in Seattle, and executive sous chef at Spago. He brings his own sensibility to Puck’s vision, and together they create some truly spectacular dishes.

We arrived for an early seating, and left our car with the very well-priced valet. Street parking is virtually impossible in Union Square, and the garages themselves tend to be fairly overpriced, so the valet is easily worth it. Upon arrival, a very friendly hostess led us to our table, which was ready although we were a few minutes early.

We walked through the street level of the restaurant, which serves as a bar and lounge. It is well appointed, with cushy bar stools and small tables. The bar menu offers the sort of casual fare that has become Puck’s trademark: salads, an assortment of pizzas, and grilled sandwiches. Standard comfort food is spruced up with interesting ingredients or preparations: macaroni and cheese is prepared with five cheeses and prosciutto, and a ham pizza is adorned with figs and truffle oil.

Walking down the long staircase, we arrived at our table in the restaurant proper, up against one of the long windows that overlook the small green space created outside of the Postrio building. The interior is gorgeous with high ceilings, beautiful lighting, and works of art by Diego Rivera, Terry Winters, and Dale Chihuly. Unique blown-glass light fixtures by Pam Morris add a dash of eccentric modernism to the décor.

The restaurant is well laid out, with a variety of seating options. For couples looking for a romantic evening, the small window-side tables are ideal. For larger parties looking to unwind a bit, the spacious booths are a perfect fit. And for those looking for a bit of visual action with their meal, the handful of tables situated near the open kitchen offer a constant show.

The menu at Postrio offers something for most tastes; although, vegetarians may be better off looking elsewhere. As befits a centerpiece of the Bay Area dining scene, Postrio has a number of seafood staples, as well as some innovations. Oysters on the half shell, Monterey Bay sardines, salmon pizza, and spicy tuna rolls present a nice range of Bay appetizers, while the entrée selections always include at least two types of fish, as well as day boat scallops. For those who just can’t make up their mind, a tasting menu is also available, balanced nicely between seafood and more traditional fare.

The wine list is nothing short of inspired, with an exceptional range from around the globe, and a particularly robust French offering. Although wines here tend to be more on the expensive side, there are a handful of wines available by the bottle for under $50; and overall, even the more pricey selections are still a strong value. To accompany our meal we chose a bottle of the 2005 Chanson Clos des Fèves--a Beaune premier cru that I haven’t seen offered much in the city, making it a real treat.

Our meal began with an intriguing amuse-bouche: a rich, creamy mushroom soup, delivered by our waiter in two small espresso cups. Black chanterelles were the overarching taste in the soup, with hints of cumin and fenugreek giving it depth, and a slightly sweet Korean sauce garnishing it. Although a bit skeptical at first, we were both immensely impressed with the execution of this dish. The flavors were meaty and full, while never coming across as too heavy handed. As an amuse, the soup succeeded admirably – both my companion and I were filled with anticipation as to what Kamimura could achieve with the rest of our meal.

We didn’t have to wait long, as our appetizers arrived only moments after the soup was gone. I was treated to Kobe Beef Tartare, while my companion sampled the local fare with a Dungeness Crab Cake. Both were remarkable in their own ways, but the tartare was the highlight of my entire meal– and indeed, may be one of the highlights of my dining career.

Visually, the tartare was one of the most beautiful dishes I have ever seen. A small round of meat was adorned with a raw quail egg, and sat atop a dash of chocolate sauce and a rich orange miso-dijon aioli. Every detail was perfectly contrived, even down to the hollow quail egg, a pale green dusted with brown. The meat itself was perfectly prepared, with a smooth and creamy texture that allowed it to melt on the tongue like warm butter. The salt of the aioli, the off-sweet of the chocolate sauce, and the tender bitterness of the sprinkled greens all combined to render a dish as decadent in its layering of flavors as it was in its appearance. If the skillful balance of complex flavors is the essence of fine dining, then this dish alone secures Postrio’s place among the most illustrious restaurants in the United States.

The crab cake, although not nearly as obviously a signature dish as the tartare, was nonetheless quite solid. With a bit of mango, tomato jam, and watercress, it was layered in its flavor as well, and did an admirable job showcasing the richness of the local crab. Part of the charm of Postrio is its ability to offer both eccentric foodie dishes and safer fare with the same level of attention to detail, making it an ideal choice for parties with differing taste.

Our appetites now fully piqued, we eagerly awaited the arrival of our entrees. And when they did arrive, we were not disappointed. I chose a Liberty Farms Duck Breast as my entrée, while my companion chose a Kurobuta Pork Loin, allowing us to get a good feel for how Kamimura attacked these two relatively difficult meats.

The duck breast, topped with Bing cherries and served atop caramelized onions, polenta, and a rich gravy, was perfectly executed. The meat itself was cooked to perfection, with the meat still a rich and succulent pink. The cipollini onions, sitting on the plate like dark spiral galaxies, added a sweetness that, when coupled with the Bing cherries, complemented the savory maitake mushroom gravy exactly.

The pork was similarly well delivered. Creamy in texture, the meat was supported by an assortment of cherry tomatoes, black garlic, a summer ragout, and peaches. This dish was perhaps the most interestingly plated of our meal, with two ornate sauces decorating the plate. The sauces were absolutely amazing, and were I to have any complaint about the meal, it would be that these spectacular sauces were simply lost in the cavalcade of other flavors present on the plate.

After such a rich meal, it was difficult to imagine braving whatever decadent desserts Kamimura may have come up with. But duty called, and we obligingly ordered a chocolate soufflé to share. Between the meal and the dessert, we were treated to a lovely platter of artisan cheeses and bread, which helped prepare our palates.

The chocolate soufflé arrived on a plate with a medley of strawberries and fruit, and a small scoop of raspberry sorbet with cacao nibs. Although the soufflé itself left a bit to be desired – although for a quick-rise soufflé it was admirably done – the sorbet was stu pendous. Tart and sweet, the cacao nibs balanced it perfectly, and it was frankly one of the best sorbets I have ever tasted in my life. As a full dessert this would have been surprisingly good, as a simple supporting dish it was shockingly so.

From beginning to end, our wait staff at Postrio was attentive, knowledgeable, and friendly. Water and wine were filled seamlessly and without intrusion; information about ingredients was readily available; and I constantly felt like everyone there was doing all they could to make me feel more comfortable. Food at Postrio is presented as a labor of love, not just as a matter of sustenance. The wait staff is as passionate about the food as the chefs are, and it shows every step of the way. Indeed, all aspects of Postrio seem built around making accessible Puck’s mantra: Live. Love. Eat. 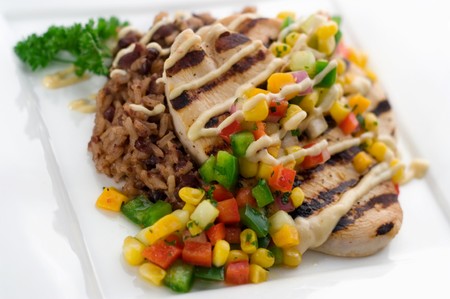