With Rome-style cuisine and the atmosphere of a lively trattoria, a night at SPQR in the Pacific Heights neighborhood feels like a night in Rome. House-made semolina pastas, fresh vegetables, exotic cuts of meat, an all-Italian wine list, and plenty of Umbrian olive oil ensure that SPQR’s simple dishes are anything but ordinary. Executive Chef Nate Appleton, also of sister restaurant A16, serves the traditional ingredients and recipes that have made Rome an epicurean epicenter for thousands of years.

Enter SPQR a little after seven o'clock on a weekend night and the lively atmosphere of a Roman trattoria envelops you. The aromas of grilled meat, tomato sauce, rosemary, and thyme waft above tables of guests chatting and sipping wine. In September of 2007, Executive Chef Nate Appleton decided to expand the regional scope of his cuisine by opening SPQR in the Pacific Heights neighborhood.

Appleton’s other restaurant, the successful A16, opened in 2003 and focuses on the Italian cuisine of the Campania region. It gets its name from the major highway that runs through Campania. A16 quickly became known for its unique yet traditional Italian dishes designed by Chef Appleton, particularly its Wild Boar Salame, prompting Michael Bauer to say: "It was dining theater at its best." Whereas A16 focuses on the Italian cuisine of the Campania region, SPQR features the cuisine of Rome, a region known for a wealth of delicious dishes. SPQR takes its name from the Latin phrase Senatus Populusque Romanus, which means "The Senate and Roman People."

I was promptly seated. SPQR's décor is quite reserved—a narrow dining room with dark wood tables and white walls—but the atmosphere is casual. Wine racks extend to the high ceiling, a long marble bar runs toward the restaurant's rear, and during the day, skylights light the dining room. Though SPQR is a great place to show off an Armani suit, I didn't feel out of place in jeans and a button-down shirt.

The dinner menu is specific to Rome, but SPQR's Wine Director Shelley Lindgren decided to include wines from all over Italy. The Lazio region, which is home to the province of Rome, is fairly represented, and Italy's best known grape varieties, such as Nebbiolo, Trebbiano, and Sangiovese, comprise some of the expertly designed wine list. Lindgren  also saves room on the list for Italian wines that are not as well known. Some prime examples are the 2006 Colli di Castelfranci 'Paladino' Fiano, which features the up and coming white wine grape Fiano, and the  2003 Valle dell'Asso 'Piromafo' Negramaro, which features the full body and bright red fruit of the Negro Amaro grape. The wine list includes inexpensive to moderately-priced wines, including two Italian rosés by the bottle, which would go very well with many of the dishes.  The list of wines by the glass is particularly extensive, offering a daily selection of around thirty wines.

In Italian style, SPQR's dinner menu is designed for sharing. A single Antipasti Grande or Pasta Fatta In Casa could be enough for a light lunch, but it takes more than one dish to round out a hearty dinner. On Saturday and Sunday, Brunch is served from 11:30am to 2:30pm and breakfast items are offered, such as Polenta Griddle Cakes with maple syrup, almonds, and strawberries. Many of the menu items focus on only one or two ingredients, allowing them to truly shine. However, ordering only one plate for yourself would be decidedly monotonous. To guard against this, the menu items are separated into Antipasti, Antipasti Grande, and Pasta Fatta In Casa, and discounts are given on orders of three or more Antipasti. To see how the different sections of the menu interrelated, we shared two antipasti, two antipasti grande, and two pastas among three people.

The Fried Cauliflower is worth raving about. Filled with intrinsic flavor and very light, it came with only shaved garlic and capers. Though I can imagine a few cauliflower zealots enjoying it alone, the dish is a perfect accompaniment to a pasta or meat dish. The menu at SPQR is based around the seasons and I've heard that the Fried Artichokes, which are served in the spring in the same style as the cauliflower, are even better.

After the cauliflower, we tried the Wild Arugula Salad. The figs, sliced peaches, red onion, melt-in-your-mouth croutons, and shaved ricotta cheese were so delectable that only a drop of olive oil was added to round out the flavors. All the ingredients were mixed together, save the ricotta, which was shaved on top.

Many of the plates celebrate the whole animal, including "lesser cuts of meats," or fifth-quarter meats, the less appreciated meat left over after butchering an animal. When weighed, fifth-quarter meat comprises almost one fifth of the animal, hence the term.  For example, listed among the Antipasti were Tripe alla Romana, Pig Ears, and Chicken Livers.

The larger Antipasti Grande focus on prime cuts of meat with vegetables, such as Fried Beef Meatballs with tomato bruschetta. I tried the outstanding Local Rock Cod. The sturdy cod was served in hot gems with light vegetables that were just barely warmed. The flavors of the sliced cherry tomatoes, blue lake green beans, and sliced Cerignola olives were released with a quick sauté, but maintained their textures. Even a bit of crunchy Romaine lettuce was included, and the entire dish exuded basil oil.

The Local Calamari was grilled and served in pieces with a nice balance of salty capers and spicy chilies that screamed Mediterranean. The small red chilies were served whole, giving the bowl of steaming calamari a wonderful presentation of fresh purple and white calamari with bursts of red chili. Not a good choice for those who prefer battered, crispy calamari, but perfect for those who like their seafood to taste as if it were just plucked from the ocean.

The highlights of the menu are the house-made pastas, which are made daily and are also sold by the pound. Semolina is the featured grain in Rome's pasta and SPQR follows suit. Again, the perfect combination of substance and lightness, the pasta is chewy without being heavy. The Spaghetti Carbonara veers away from the traditional Italian style, unlike the rest of the menu. Italian carbonara is very simple, just pasta, parmesan, guanciale (similar to pancetta and made from pig's jowl), and egg, but SPQR's was a heavier and creamier American-style carbonara. I didn't dislike SPQR's carbonara, it just didn't stick to tradition the way the other plates did. But the Spaghetti Amatriciana, with only a smattering of tomato sauce, guanciale, and a ton of pepper, brought back the simplicity at which SPQR excels.

The service at SPQR is friendly and knowledgeable, but I found it intrusive at times. For example, the removal of plates and glasses seemed like a large production that I was invited to partake in. Also, the dishes came out too quickly, which could be excused since we ordered everything together, but it would have been nice if they were more staggered to allow us more time.

SPQR's dessert menu is limited and won't satisfy those looking for chocolate. But if you're a fan of gelato or sorbet, the restaurant has just what you're looking for. Having decided against the three dessert options, I ended the meal with an expertly executed macchiato made from Blue Bottle coffee.

Chef Chris Behr is the Chef de Cuisine at SPQR and takes control of the kitchen when Executive Chef Appleton isn't around. He grew up in New Jersey but visits Italy once a year, to gain the experience that helps him share in the development of SPQR's menu. He describes his carefully prepared cuisine as "grandma food." The dishes awed me with their flavorful simplicity. I could taste the food-centered traditions of Italy in the dishes and the wholesomeness that comes with them. Eating at SPQR offers a taste of the sweet life. 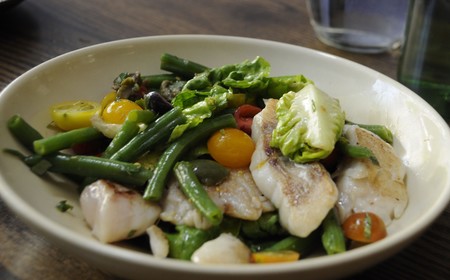 $8 each or choice of three $21 when ordered together

Spaghetti or Rigatoni with: