For a truly unique San Francisco experience, there are few options that offer a better example of California's cutting edge design and cuisine than at the Moss Room at the Academy of Science, in Golden Gate Park. Hidden below the museum like a rare gem is a restaurant dedicated to producing extraordinary cuisine with ingredients from local sources and a nod to classic French preparation. The dramatic dining room with its namesake living wall of moss and fern is an ideal choice for a dining destination unlike any other in the Bay Area.

A Culinary Treasure Beneath the Academy of Science

In a city of well known, even world renown restaurants, there is a hidden gem buried deep within San Francisco’s Golden Gate Park that remains a secret dining destination to those in the know. Located in the basement of the California Academy of Science, The Moss Room has all the qualities of the best restaurants in San Francisco with the exception of one thing, making it even more appealing: a packed house. The food is off-the-charts delicious, the décor is exciting, and the service is top notch; and its subterranean location under the museum secludes The Moss Room from the kind of foot traffic that many of the restaurants in the city depend on.  Therefore, many evenings are host to guests who have singled out the restaurant as their destination -- except, of course, for Thursday nights when the museum is transformed into a gigantic cocktail lounge with music and alcoholic libations. Sure, serious restaurant hounds and foodies know about it, but it still remains relatively undiscovered by the masses. This is great news for all Bay Area diners and those planning a visit to San Francisco as there is a good chance you can land a reservation without the hassles that one might encounter from a similar caliber restaurant.

During the day, The Moss Room does bustling business for lunch catering to the museum’s huge crowds. When the museum is open, the entrance to the restaurant is down a dramatic stone and glass stairwell past a moss, fern, and vine-covered living wall.  However, evening diners are redirected outside past the museum’s side patio, down an elevator that deposits them in the back hallway of the restaurant.  This does not have quite the same dramatic effect as descending down the stairwell; but as you enter the restaurant from the rear, you immediately see the entire two-story namesake wall that seems to grow out of an enormous fresh water fish tank at its base.  The tank is filled with Asian River fish and it looks as if the Rainforest exhibit from upstairs has worked its way into the restaurant. This massive display of flora and fauna helps the windowless dining room compensate for the fact that it is underground, and gives the diners the impression of actually being outside. The rest of the dining room is equally striking, from the back-lit reddish bar that resembles molten lava to the hand blown light fixtures protruding from the wall that beg to be touched.  There is also a lovely private dining room enclosed in glass for large parties that still feels like it is part of the larger dining room.  All the design components seem to reflect a similar organic theme as if the restaurant emerged like a mushroom from deep within the nearby Muir Woods.

It  is very clear that many of the ideals that guide the science museum above are reflected on the menu with Chef Loretta Keller’s philosophy of using local, fresh and seasonal ingredients. The first thing I notice is the clear indication of these ideals in the wine list.  Instead of traditionally breaking down the wines by red and white varietals, the list of wines-by-the-glass is broken down into three categories; Sustainable, Organic, and Biodynamic.  This may be the future of wine lists as we know it (at least in the immediate area) and the offerings are quite substantial considering the length of time it takes for a vineyard to produce such quality fruit. The extensive list of wines-by-the-bottle is more traditionally labeled. The selections are numerous with California and France dominating the list. There is also an excellent beer list exclusive to California breweries.

The kitchen is under the control of Chef and Owner Loretta Keller, who has a long history in San Francisco, getting her start with Jeremiah Towers at the famed Stars restaurant.  She has since gone on to open the very popular COCO500, in SoMa, and has also partnered with Charles Phan of the Slanted Door on the Academy Café, which is the more casual eatery on the main floor of the museum. The menu at the Moss Room focuses on the bounty of California’s edible resources, where almost every ingredient has a distinctive provenance.

I begin with the Country Style Pork Terrine.  It is served with house-made pickles, mostarda di frutta (a slightly sweet fruit-based condiment cooked in mustard flavored syrup), and a small salad of frisee. The terrine is rustic with big chunks of pork flecked with delicious fat and served with crusty bread. The pickled onions and sweet mostarda di frutta is a nice counter to the richness of the terrine.   It is an excellent version of a classic dish and, in my opinion, would impress the most discerning Parisian.

The second appetizer is the Monterey Squid Spaghetti made with squid ink, oven-dried tomatoes, chilies and herbs.  This could possibly be one of the best dishes I’ve eaten in the past year.  It is incredibly rich and flavorful.  The texture of the black pasta is distinctively hand-made and expertly cooked to order.  Each bite has tender bits of squid bathed in a light butter sauce, a little heat from the chilies, and a touch acidity from the tomatoes.  The waiter tells me people often order a double portion as an entrée and I completely understand why.

Next up is the Massachusetts Day Boat Scallops served with sweet potatoes, Brussels sprouts, and house-made pancetta.   The scallops are seared to a golden caramelized color and  masterfully cooked, a task that is not easily accomplished.  The bitterness of the sprouts and the sweetness of the potatoes balance each other nicely and work well with the pancetta, which lends just the right amount of richness to the dish.

Just when I think it can’t get any better, out comes the Rancho Gordo Flageolet Bean Cassoulet in its own cast iron crock. The small vessel is bursting with braised short ribs, Toulouse sausage, and an entire leg and thigh of duck confit.  This dish is incredibly rich and satisfying. It’s the supreme comfort food for gourmets and Frenchmen alike. If France had a national dish and there were a competition, this version would certainly be in the running to win top honors.

I order two side dishes to accompany the Cassoulet and Scallops. The first is local Spinach with harissa, golden raisins and pine nuts.  The sautéed spinach picks up a nice peppery flavor from the harissa, and the sweetness of the raisins and richness of the pine nuts balance the dish brilliantly. The second is a Gratin of Cauliflower made with béchamel, Gruyere, and gremolata. The cauliflower maintains a nice texture inside the rich cream sauce and the Gruyere provides just the right amount of bite.  Both side dishes are served in similar cast iron skillets, which make for a wonderful presentation.

I finish this gloriously rich meal with a Meyer Lemon Tart.  The consistency of the custard is dense and has an intense lemony flavor. The delightfully light and fluffy Italian meringue is the fitting complement to the thick custard. A bit of lavender sauce finishes off the tart and adds just one more note of French influence to the dish.

Although the Moss Room is on the cutting edge of many culinary trends in California, several of the items on the menu and the techniques used have roots firmly planted in classic French cuisine. The ingredients are distinctively Californian, and the restaurant’s flair for presentation and use of local, sustainable and organic purveyors puts it at the forefront of where one wants to be in the San Francisco restaurant scene.  This restaurant has so much going for it, I just hope more people find this secret spot so as to keep it treasured like so many of the relics on display in the museum above. 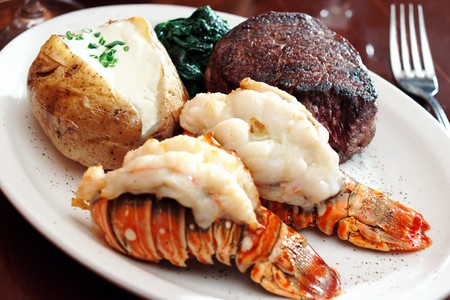 18% gratuity added to parties of 6 or more